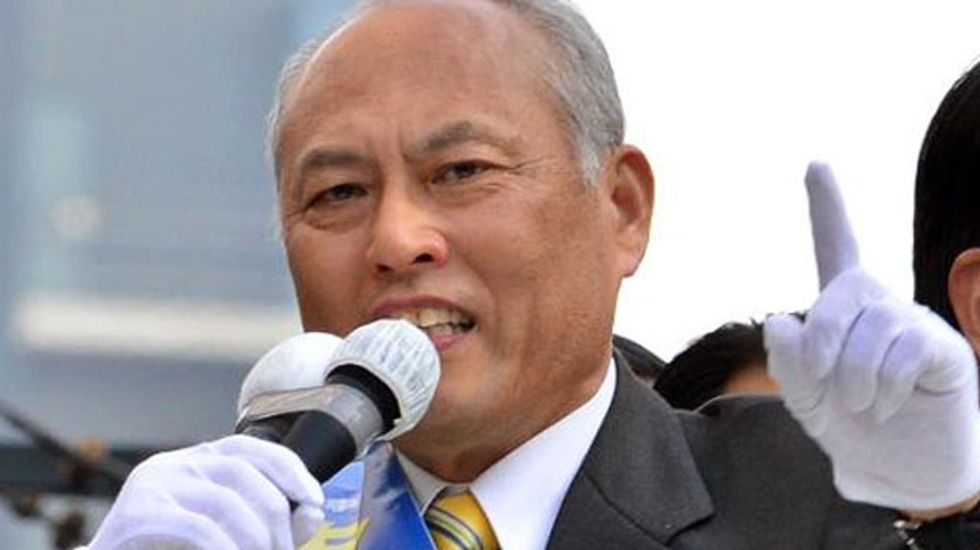 Women in Tokyo are threatening a sex boycott against any man who votes for the front-runner in this weekend's gubernatorial election, in protest at his claim that menstruation makes women unfit for government.

A Twitter campaign group based in the capital which bills itself as "The association of women who will not have sex with men who vote for (Yoichi) Masuzoe," has garnered almost 3,000 followers since it launched last week.

Although the founders have not identified themselves, in their profile they said: "We have stood up to prevent Mr. Masuzoe, who makes such insulting remarks against women...We won't have sex with men who will vote for Mr. Masuzoe."

Masuzoe, 65, a former political scientist who became a celebrity through TV talk shows before getting involved in politics in 2001, is widely seen as an establishment figure in a country where gender roles remain very distinct.

In 1989, he told a men's magazine that it would not be proper to have women at the highest level of government because their menstrual cycle makes them irrational.

"Women are not normal when they are having a period... You can't possibly let them make critical decisions about the country (during their period) such as whether or not to go to war," he said.

Masuzoe has the backing of the conservative ruling party of hawkish Prime Minister Shinzo Abe and is seen as likely to pip his nearest rival, former prime minister Moriyoshi Hosokawa who is standing on an anti-nuclear platform.

All 16 candidates in the poll are men, with many of them aged in their 60s or older.

But Masuzoe's comments about women, as well as other controversial remarks on taxing the elderly, have triggered a backlash.

Another website was launched on Wednesday by a group of women also seeking to prevent Masuzoe from becoming Tokyo governor -- that site has drawn 75,000 hits per day and 2,800 people have signed its petition.

"Masuzoe is an enemy of women...He doesn't love Japan. He loves only himself," said one comment on the site, by a woman who identified herself as Etsuko Sato.

On the Twitter campaign feed, a post by manatowar3 said: "I'm an old man. But I cannot tolerate him (Masuzoe) from a man's point of view."

Despite high levels of education, many women in Japan leave career jobs when they have children, and social pressures to play the homemaker remain strong.

There are very few women in senior political positions -- Abe's 19-member cabinet has only two -- and company boards are overwhelmingly male.

Speaking in Davos last month, Abe pledged that by 2020, 30 percent of leading positions would be occupied by women. However, most independent observers suggest this target is unlikely to be met.