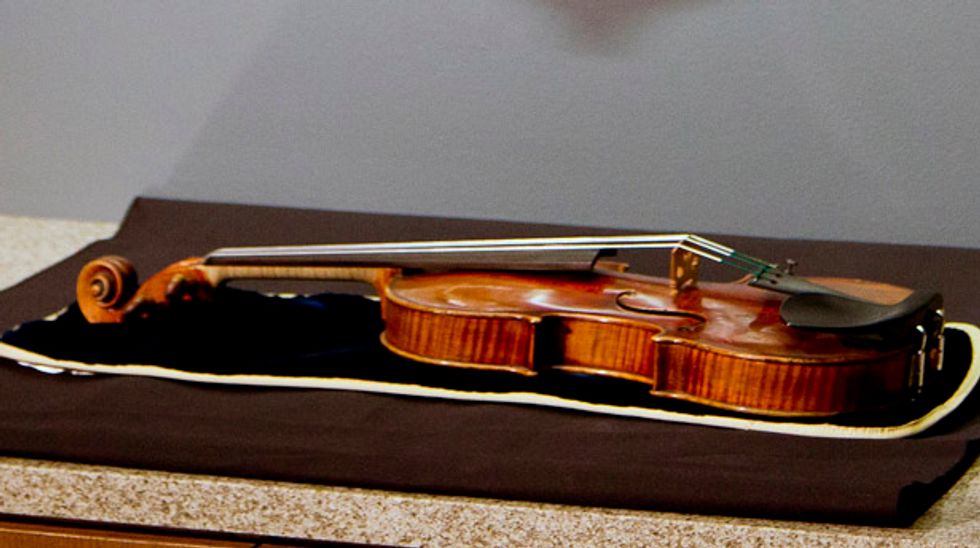 The 300-year-old Stradivarius violin that was taken from the Milwaukee Symphony Orchestra's concertmaster in an armed robbery is on display for the media after it was recently recovered, in Milwaukee, Wisconsin February 6, 2014. The Stradivarius violin worth millions of dollars, which was stolen from a concert violinist in an armed robbery last week, has been recovered from a suitcase in the attic of a Milwaukee house, law enforcement officials said on Thursday. REUTERS/Darren Hauck (UNITED STATES - Tags: CRIME LAW ENTERTAINMENT SOCIETY)

The violin, which was made in 1715 and had an appraised value of $5 million for insurance purposes, was recovered late Wednesday from a Milwaukee residence, where it had been stored in a suitcase in the attic, police said.

Salah Jones, 41, and Universal Knowledge Allah, 36, were charged with felony robbery and Allah was also charged with marijuana possession. A 32-year-old woman arrested in connection with the crime, has not been charged.

Early last week, the thieves took the violin after incapacitating concert musician Frank Almond with a stun gun as he left a concert in suburban Milwaukee, authorities said.

Jones told a witness that stealing a Stradivarius violin "was his dream theft" because of its potential value and it could be "snatched from the hands of a musician as they walk down the street," the criminal complaint said.

The complaint said Jones had Allah buy the Taser for him last summer because he did not have a permit for it.

A few months later, Jones told Allah that he needed the Taser to acquire an instrument that was rare and one of a kind, the complaint said. Before the theft, Allah retrieved the Taser from a safe, it said.

After his arrest on Monday, Jones told authorities they could find the violin in a black suitcase in an attic in a residence on the city's south side, according to the complaint.

The so-called Lipinski Stradivarius had been on loan indefinitely to Almond from a private owner. It is one of roughly 600 violins, violas and cellos still in existence that were built by the famed Italian artisan Antonio Stradivari.

Almond said he plans to play the violin on Monday during a performance in suburban Milwaukee.

"We can now celebrate the wonderful resolution of this most recent chapter in the instrument's storied life," Almond said in a statement posted on the website of the Sharon Lynne Wilson Center for the Arts, where he is scheduled to play.

Bond was set at $10,000 for Jones and at $500 for Allah during appearances Friday afternoon in Milwaukee County District Court.