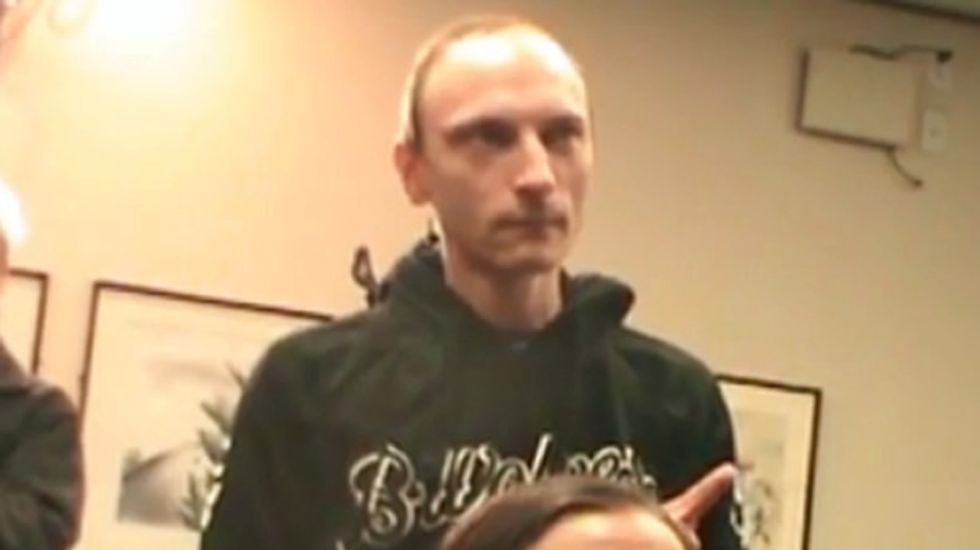 A Friday press conference organized by Dr. Scott Lively of Defend the Family International was interrupted by what members of the group called a "homo-fascist."

Video of the exchange, which can be seen below, identifies the "Combatants" as the Coalition for Family Values and the Southern Poverty Law Center (SPLC), although the real combatants appear to be a Russian LGBT activist and Dr. Scott Lively, who the SPLC identifies as an anti-LGBT activist.

As the video begins, one of the speakers for Defend Family International, which was holding what it called a "Pro-Russian, Pro-Family" press conference, is interrupted by an activist speaking in Russian. Another activist repeats what is held on a pink sign in the background, "Stop killing us."

"Stop killing speech," Dr. Lively replies. "This is not your forum."

A representative for the Southern Poverty Law Center told Raw Story that, given Dr. Lively's support of the criminalization of LGBT expression in Russia, his claim that this protestor is "killing speech" makes Dr. Lively "a screaming hypocrite."

A woman then offers to translate what the activist wants to say, but Dr. Lively insists that "we're not going to take comments until after we've had our press conference."

"We paid a sizable fee for the use of this room, and we are not going to allow our press conference to be overrun by political activists."

When the activist insists on speaking, Dr. Lively says, "this is what I would like to bring to the attention of everyone in this room -- this is what we call 'homo-fascism.'"

"'Homo-fascism,'" he continues, "is a hard-left, totalitarian mindset that attempts to suppress all perspectives on the homosexual issue except those that favor their positions."

"Every time the pro-family people try to tell the truth about homosexuality," Dr. Lively says, "we are interrupted by homo-fascists. Now, I would like to ask if there is security here...because I would like to ask you to remove these two people from the press conference."

Lively and Peter LaBarbera of Americans for Truth About Homosexuality were holding the press conference in D.C. to issue a statement in support of Russia's ban on gay “propaganda” and urge other nations to follow suit.

Watch video of the exchange below.