U.S. and Russia promise to work together to advance Syrian peace talks 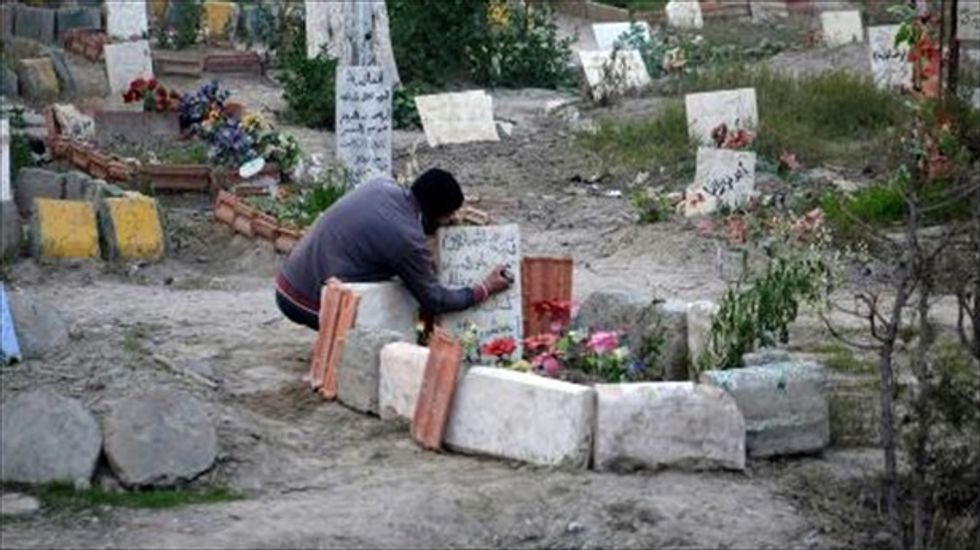 A man rewrites the name plate on a grave on Feb. 13, 2014 at a cemetery in the Syrian town of Deir Ezzor [AFP]

Washington and Moscow promised Thursday to help unblock stagnant Syrian peace talks, as Western countries demanded that Damascus keep its promise to release males detained during the evacuation from Homs.

The United States and Russia have "promised that they will help both here and in their capitals and elsewhere to unblock the situation for us," UN mediator Lakhdar Brahimi told reporters in Geneva after meeting high-level diplomats from the two countries.

The meeting with Deputy Foreign Minister Gennady Gatilov and US Under Secretary of State Wendy Sherman came after Syria's warring sides spent days in Geneva trading blame for the violence ravaging their country.

"The hard work of this diplomacy continues, and the United States will continue to support this work going forward," a US official said after Thursday's meeting.

The so-called Geneva II negotiations, which began on January 22, have so far done nothing to end the nearly three-year civil war that has claimed more than 136,000 lives and forced millions from their homes.

"Until now, we are not making much progress," Brahimi said, acknowledging that "failure is always staring at us in the face."

Syria's foes did not meet Thursday, and were expected to hold only separate meetings with Brahimi on Friday.

Washington, which backs the opposition, and Moscow, a key ally of Syria, initiated the talks, but remained on the sidelines during the first round in January, allowing Brahimi to run the show.

But the current round of talks, which started Monday and could stretch into Saturday, has achieved little beyond an endless restating of positions and there has been pressure on the two major powers to play a bigger part.

"The presence now of the United States and Russia comes at the right time," opposition chief negotiator Hadi Bahra told AFP, insisting the pair needed to "pressure the regime to be more serious."

Syria's deputy foreign minister, Faisal Muqdad, meanwhile told AFP "all the pressure should be put on the other side."

It was unclear though if they could push the sides closer to actual dialogue.

The opposition has presented a detailed plan for political change, maintaining that the only way forward is to create a transitional government, without President Bashar al-Assad.

The regime however insists Assad's future is not up for discussion and has refused to even touch on politics until the battle against what it calls rebel "terrorism" is resolved.

The British-based Syrian Observatory for Human Rights has reported an average of 236 people killed daily since the Geneva II process began on January 22, many of them as regime forces drop explosive-packed barrels on rebel areas.

Rights groups have repeatedly condemned the use of helicopter-borne barrel bombs as "indiscriminate".

Washington and London meanwhile demanded Damascus honour a pledge to release hundreds of men detained after being evacuated from besieged rebel-held districts of Homs this week.

"The regime should know that the world is watching with deep concern what is taking place in Homs and the status of these male evacuees," said State Department spokesman Edgar Vasquez.

Homs governor Talal al-Barazi told AFP that "young men aged between 16 and 54 will be freed today," but did not specify how many.

Barazi said 390 were initially detained and that 181 have already been freed, including 70 on Thursday.

But according to the Syrian Observatory for Human Rights, only a small number have been released, while activists said men still in the besieged areas feared indefinite detention or even kidnapping by paramilitary groups if they leave the rebel-controlled enclaves.

The UN-led humanitarian operation began last Friday in ravaged Homs, Syria's third city, where regime forces have besieged rebel-held districts for more than 18 months, and where residents have been surviving mainly on olives and wild plants.

The Homs operation, which began nearly a week ago, has so far seen the evacuation of some 1,400 people from the rebel-held districts and the distribution of 6.2 tonnes of flour and 500 food parcels.

Although no evacuations or aid deliveries were expected Thursday, Barazi said the truce will probably be extended until Saturday night to allow humanitarian operations to resume on Friday.

Elsewhere, the UN refugee agency said it had set up an air bridge to deliver 800 tonnes of mainly medicine, clothing and blankets to the northeastern city of Qamishli.

Nine flights had already gone from Damascus since February 6 and more were planned in an aid operation aimed at circumventing the dangers of overland travel.