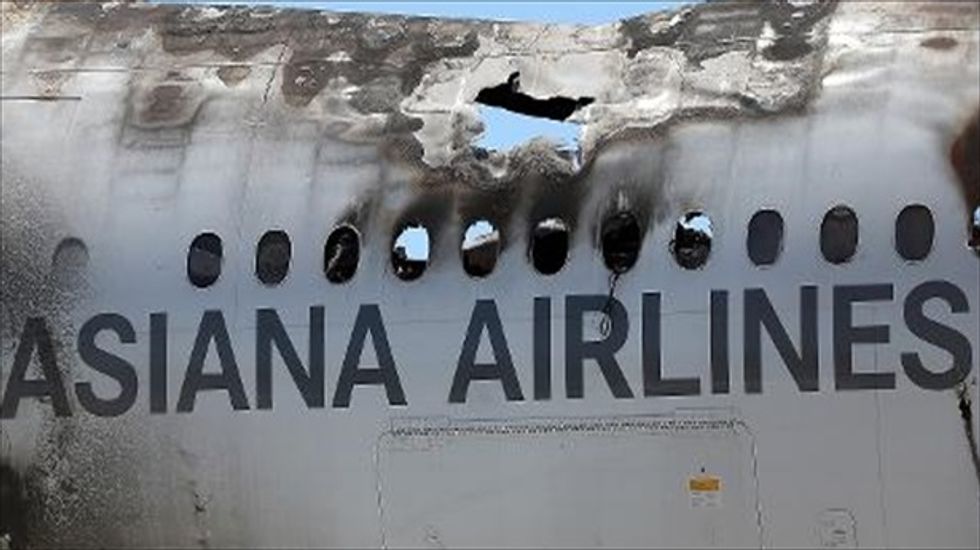 The wrecked fuselage of Asiana Airlines flght 214 sits in a storage area at San Francisco International Airport on July 12, 2013 [AFP]

Asiana "violated federal law last July by failing to adhere to the assurances in its family assistance plan following the crash," in which three people died last July, the Department of Transportation said.

The fine is the first imposed by the DoT under a 1997 law which requires foreign airlines to adhere to a "family assistance plan" in the event of aircraft accidents resulting in a major loss of life, it said.

"In the very rare event of a crash, airlines have a responsibility to provide their full support to help passengers and their families by following all the elements of their family assistance plans," said U.S. Transportation Secretary Anthony Foxx.

"The last thing families and passengers should have to worry about at such a stressful time is how to get information from their carrier," he added.

Three passengers died when Asiana Airlines Flight 214 clipped a seawall with its landing gear, skidded off the runway and burst into flames at the end of an otherwise routine flight from Seoul to San Francisco on July 6.

One of the victims had been pulled alive from the plane and placed near one wing. But the Chinese teenager was later run over and killed by a fire truck, which did not spot her lying under a layer of fire retardant foam.

U.S. prosecutors decided in October not to bring charges against the firefighter driving the truck.