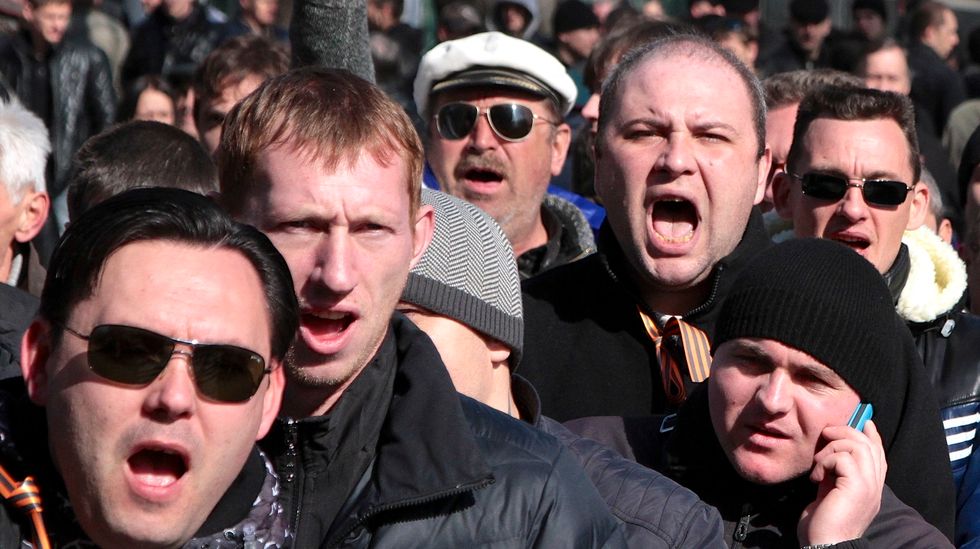 Ukraine's parliament, exercising power since mass protests put the president to flight, named its new speaker as acting head of state on Sunday to replace Viktor Yanukovich and worked to form a new government.

In a hectic round of voting in the chamber, near where triumphant but wary protesters remain encamped on Kiev's main square, lawmakers stripped the still missing president of his abandoned country home. Its brash opulence, now on display, has fuelled demands that the Russian-backed, elected leader and his allies be held to account for corruption on a grand scale.

The European Union and Russia, vying for influence over the huge former Soviet republic on their borders, considered their next moves. EU officials said they were ready to help Ukraine, while Russia, its strategy of funding Yanukovich in tatters, said it would keep cash on hold until it sees who is in charge.

Parliament-appointed security officials announced legal moves against members of the ousted administration and those responsible for sniper fire and other police attacks on demonstrators in violence that left 82 dead in Kiev last week.

A day after dismissing Yanukovich with the help of votes from his own party, parliament handed his powers temporarily to Oleksander Turchinov, who was elected speaker on Saturday.

An ally of newly freed opposition leader Yulia Tymoshenko, Turchinov called for an interim prime minister to be in place by Tuesday to run the country until a presidential election called for May 25. Among contenders may be Tymoshenko, 53, who lost to Yanukovich in 2010 and was then jailed for corruption.

Yanukovich, 63, denounced what he called a "coup d'état" reminiscent of Nazi Germany. He spoke on television on Saturday from what looked like a hotel room in a city close to the Russian border.

With pro-EU protesters still controlling central Kiev, and crowds on the streets in other towns and cities, parliament is under pressure to demonstrate its authority across the nation and to calm fears of a split with pro-Russian regional leaders in the fallen president's eastern political base.

"In these days the most important thing is to form a functioning government," said Vitaly Klitschko, a former world boxing champion and a leading figure in the uprising.

"We have to take very important steps in order to ensure the survival of the economy, which is in a very bad shape," he told a news conference. He denied there had been a coup.

"Parliament is the last legal official institution in Ukraine," he said. "Nobody knows where the president of Ukraine is. We tried to find him all day yesterday. His location is unknown. He left the country without a president."

Even the president's Party of the Regions, backed by many of the wealthy "oligarchs" who dominate Ukraine's post-Soviet economy, seems to have given up on a wavering leader with whom Moscow had last week appeared to be losing patience.

"The changes that have happened, have happened. It's already done," said Tatyana Bakhteyeva, a parliamentarian from Yanukovich's home region of Donetsk. Party lawmakers issued a statement blaming Yanukovich and his entourage for the crisis.

Instability in Ukraine, a vast territory of 46 million, is a major concern for both Russia, where President Vladimir Putin supported the Yanukovich administration financially, and for the European Union to the west, which had offered Ukraine a far-reaching trade pact that Yanukovich rejected in November.

It was that decision, taken after threats of retaliation from Moscow, which sparked the protests. The European Union, which has worked closely with the United States on Ukraine, said the trade deal was still open, and EU aid was on offer.

"We are ready to engage in substantial financial assistance for Ukraine once a political solution, based on democratic principles, is finalized and once there is a new government which is genuinely and seriously engaged in institutional and economic reforms," said EU economy commissioner Olli Rehn.

The ascendant leadership has promised economic reform and closer ties to the EU; Tymoshenko even told the crowd in central Kiev on Saturday night that she expected to join the bloc - something few inside the EU expect any time soon.

But her mixed performance as prime minister following the 2004-05 Orange Revolution that overturned a first presidential election victory by Yanukovich, means the former gas magnate and her allies may have much to prove before very substantial aid is forthcoming. At the same time, the risk of instability on the EU borders, and of Russian intervention, may drive EU governments and their U.S. ally to dig deep to help Kiev out.

French Foreign Minister Laurent Fabius, who helped broker a short-lived truce in Kiev between Yanukovich and the opposition after Thursday's violence, said the EU must help Ukraine to curb more violence and prevent the break up of the country.

"In light of the exceptional situation in which Ukraine finds itself, France, together with its European partners, calls for the preservation of the country's unity and integrity and for people to refrain from violence," Fabius said.

British Foreign Secretary William Hague warned Russia against undermining EU aid - a reference to its threats of trade sanctions last year - and against other intervention.

Russia docks its Black Sea Fleet on Ukraine's Crimea peninsula - a region that like Yanukovich's home city of Donetsk and other industrial areas in the east has many native Russian-speakers and strong cultural ties to Moscow.

Reflecting anger in Russia, where President Vladimir Putin sees Ukraine as a key element in a future customs union, Foreign Minister Sergei Lavrov said "illegal extremist groups were refusing to disarm and in fact are taking Kiev under their control with the connivance of opposition leaders".

A member of Tymoshenko's Batkivshchyna (Fatherland) party said she was one of three main candidates to be prime minister. The other two are her party colleague Arseny Yatsenyuk and Petro Poroshenko, one of Ukraine's richest men, a confectionery magnate and former minister dubbed "The Chocolate King".

The acting prosecutor general told parliament that an order had been given to arrest his predecessor Viktor Pshonka, as well as revenue minister Oleksander Klimenko. Local media quoted other officials as saying the two men evaded capture on Saturday at an airport after gunmen intervened to free them.

The acting head of the State Security Service (SBU), Valentin Nalivaychenko, was quoted on the SBU website saying he would work with protest leaders on Independence Square - known as the Maidan - to make sure "the SBU quickly took steps to seize those criminals who had killed people, those organizers of mass murder and leaders who have given criminal orders".

On Independence Square some tents were dismantled, but many people said they would go on holding the area until a new president was in place.

On Sunday morning, several thousand listened to speeches and prayers for last week's victims. Men were still wandering around with clubs and wearing home-made body armor, helmets and in some cases ski masks and camouflage fatigues.

"We'll stay here to the very end," said one, Bohdan Zakharchenko, 23, from Cherkasy, south of Kiev. "We will be here till there's a new president. We want to be the owners of our own homeland."

Another, Vitaly Servin, 25, from Luhansk, near the Russian border, said of separatists who might divide Ukraine along its historic and linguistic faultline: "There are people who want to split the country in two. We will not allow this. We will go wherever we have to and fight to keep the country united."

Yaroslav Stashenko, 36, from, the Ukrainian-speaking western city of Lviv, near the Polish frontier, said as he warmed himself by a campfire on the square: "We want Yanukovich dragged here ... He's a coward. He's hiding like a rat."

Tymoshenko is by far the most recognizable leader of Yanukovich's opponents. Aides said she received congratulations by telephone on Sunday from German Chancellor Angela Merkel, who had long urged Yanukovich to free his political rival from a sentence EU leaders believed was a legal fiction.

But though she was cheered on the Maidan on Saturday night as, looking frail and speaking from a wheelchair, she called the defenders of the square "heroes", her reception was mixed - a mark of disappointment with her time in government after the Orange Revolution raised hopes of an end to graft and poverty.

Residents in Donetsk, where Yanukovich enjoyed support from local industrial magnates, said security had been reinforced along the main approach road to his private home in the town.

Ukrainian television showed night-time security camera footage it said showed the fleeing head of state departing Kiev in a helicopter. Interfax news agency said border guards refused to let Yanukovich leave the country when he tried to take an unscheduled charter flight from Donetsk, and he was eventually driven away by his own security guards.

At Yanukovich's abandoned secret estate a short distance from Kiev, people flocked to take photographs of his private zoo with ostriches and deer, replica ancient Greek ruins, and lavish waterways and follies.

Parliament voted on Sunday to return the private domain to state ownership within 10 days.