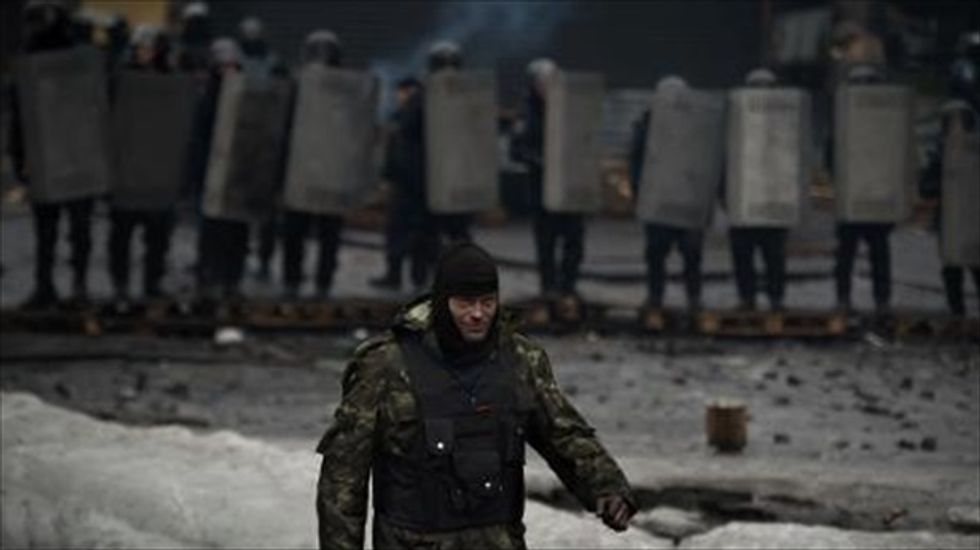 Riot police forces stand guard in front of a barricade held by anti-government protesters in Kiev, on Feb. 13, 2014 [AFP]

Ukraine's embattled leader signed a deal Friday with the opposition in a bid to end the ex-Soviet country's worst crisis since independence after three days of carnage left nearly 100 protesters dead.

But President Viktor Yanukovych's dramatic decision to hold early elections and form a new unity government while granting amnesty for those involved in the violence was met with scepticism or even hostility by nearly 40,000 protesters who gathered on central Kiev's main square -- many of them frustrated the leader was not stepping down.

"Elections in December are not enough -- he has to leave now," said 34-year-old Oleh Bukoyenko, summing up the disgruntled mood of the crowd.

Ukraine's parliament adopted a flurry of opposition-backed that still need the president's backing before entering into force.

One of the key votes amends a law that could see fiery opposition leader Yulia Tymoshenko released from a seven-year jail sentence for "abuse of power" she controversially received after Yanukovych took power in 2010.

The chamber also approved a call for the president to dismiss acting Interior Minister Vitaliy Zakharchenko -- a hate figure in the opposition who is blamed for ordering the police to open fire on unarmed protesters.

The new unity government would have the authority to reverse the inflammatory decision Yanukovych made in November to ditch an historic deal promising a path to EU membership in favour of closer ties to former master Russia.

But many protesters told AFP the deal represented too little and did little to repair days of vicious bloodletting in which police used snipers and armoured vehicles against demonstrators who fought back with bats and shields while wearing makeshift protection.

"It was a crime against humanity and Yanukovych should be sent to The Hague (home of the International Criminal Court)," said 58-year-old Sergiy Yanchukov.

One ultranationalist speaker grabbed the stage on Kiev's iconic Independence Square late Friday to call on protesters to storm the president's office at 10:00 am (0800 GMT) Saturday should Yanukovych fail to relinquish power overnight.

The call was met with cheers and rounds of applause. Several top opposition leaders meanwhile were whistled at in derision for signing the compromise agreement allowing Yanukovych to keep his post until snap elections are called by December deadline.

Kiev authorities have put the death toll from the past few days at 77.

But opposition medics said more than 60 protesters were shot dead by police on Thursday alone -- a toll that combined with the 28 victims on Tuesday put the final count at nearly 100 dead.

Life appeared to be returning to normal in much of Kiev as the city's vital metro network resumed service after being shut down for most of the week to constrain protesters' movements.

But the radicalisation of the opposition -- furious at the live ammunition used against it -- was visceral. Thousands of protesters chanted "death to the criminal" on Independence Square.

The peace deal was worked out after two days of intense mediation by the foreign ministers of European powers France and Germany along with Ukraine's cultural ally Poland. They were acting on behalf of the European Union, which had earlier imposed travel bans on Kiev leaders responsible for the violence.

"It's the best that we could have hoped for," French Foreign Minister Laurent Fabius told reporters after travelling from Kiev to Bejing.

"It was very hard to reach agreement... and in a terrifying atmosphere as there were dozens of dead."

The pact was signed in the presidential palace's Blue Hall by Yanukovych and top opposition leaders who included charismatic boxer-turned-lawmaker Vitali Klitschko.

But Russian President Vladimir Putin's representative pointedly skipped the meeting. Envoy Vladimir Lukin explained on his return to Moscow that it was "because several questions remain unanswered".

"The consultations will continue," Lukin said in comments that suggested Moscow still held out hope of somehow revising the deal.

The foreign ministry in Moscow added that Lukin's lack of signature did not mean that "Russia does not want compromise". Russia has already blasted the EU sanctions as "bullying".

The Russian stance underlined tensions between the West and Russia over Ukraine. Each side accused the other of exacerbating problems in a nation whose population is divided in pro-West and pro-Russian camps.

The US government welcomed the deal and commended the "courageous opposition leaders" for their compromise.

A US official said on Friday that President Barack Obama intended to speak to Putin about Ukraine later in the day.

One possible challenge to implementating the peace pact remains the fractured state of the opposition.

It has no one leader and quite disparate goals.

Klitschko is the closest to the deeply fragmented protest movement but limits to his sway over the most militant elements of the opposition has been repeatedly exposed in the course of the standoff.

"Even early elections this December do not guarantee that this crisis is over," said Penta political research institute analyst Volodymyr Fesenko.

"The big question now is whether the Maidan (Independence Square) support this solution."