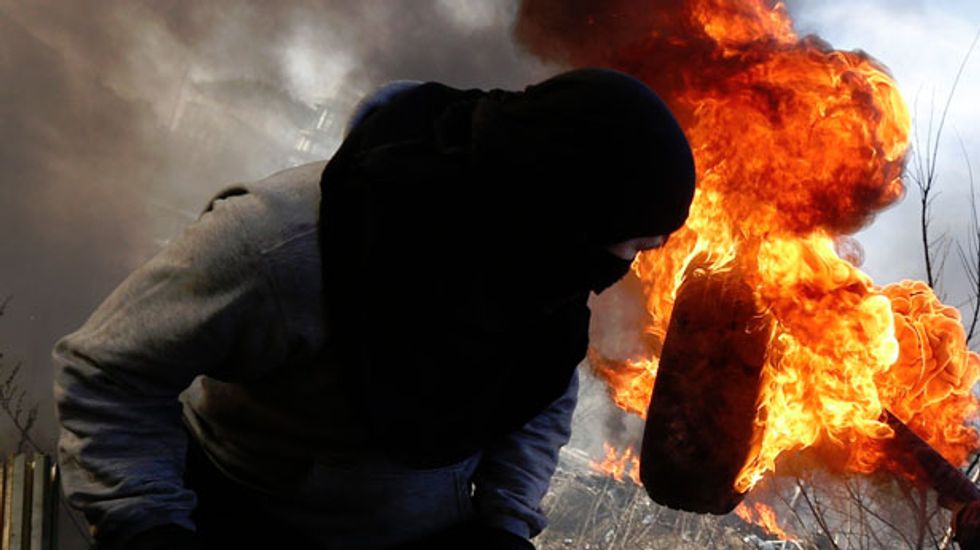 By Natalia Zinets and Richard Balmforth

KIEV (Reuters) - Ukraine opposition leaders signed an EU-mediated peace deal with President Viktor Yanukovich on Friday, aiming to end a violent standoff that has left dozens dead and opening the way for a early presidential election this year.

Russian-backed Yanukovich - under pressure to quit from the mass demonstrations in Kiev - earlier offered a series of concessions to his pro-European opponents, including a national unity government and constitutional change to reduce his powers, as well as the presidential vote.

German Foreign Minister Frank-Walter Steinmeier said the deal provided for the creation of a national unity government and an early presidential election this year, although no date had been set. The vote had been due in March 2015.

A Reuters correspondent at the signing in the presidential headquarters said Yanukovich did not smile during a ceremony lasting several minutes.

One of the European Union mediators, Polish Foreign Minister Radoslaw Sikorski, described the agreement as a "good compromise for Ukraine". In a post on Twitter, he said it "gives peace a chance. Opens the way for reform and to Europe".

With Ukraine caught in a geopolitical tug-of-war between Russia and the EU, at least 77 people have been killed this week in the worst violence since the independent country emerged from the wreckage of the Soviet Union in 1991.

"There are no steps that we should not take to restore peace in Ukraine," Yanukovich said when announcing his concessions before the deal was signed. "I announce that I am initiating early elections."

Yanukovich said Ukraine would revert to a previous constitution under which parliament had greater control over the make-up of the government, including the prime minister.

"I am also starting the process of a return to the 2004 constitution with a rebalancing of powers towards a parliamentary republic," he said. "I call for the start of procedures for forming a government of national unity."

Earlier, a Polish foreign ministry spokesman said a council of protesters occupying Kiev's Independence Square, which is also known as the Maidan, had backed the agreement.

The civic council "has voted in favor of the three opposition leaders signing the agreement with President Yanukovich concerning resolving the conflict", the ministry's spokesman, Marcin Wojciechowski, said on Twitter.

The German and Polish foreign ministers were in Kiev to promote the political compromise to end the bloodshed amid a stand-off between riot police and anti-government protesters who have occupied the central square for nearly three months.

Before the deal was signed, armed police briefly entered the parliament building while lawmakers were holding an emergency session but they were quickly ejected, opposition leader Arseny Yatsenyuk said. Members exchanged punches when speaker Volodymyr Rybak tried to adjourn proceedings.

Opposition deputies were angered because it would mean delaying a possible vote on a resolution pressing for constitutional changes to restrict the president's powers. The speaker left the chamber and debate continued.

The deal would be a setback for Russian President Vladimir Putin, who has made tying Ukraine into a Moscow-led Eurasian Union a cornerstone of his efforts to reunite as much as possible of the former Soviet Union.

Putin appointed his own envoy to the talks at Yanukovich's request on Thursday but it was not clear what role, if any, Russian officials had in the negotiations.

In another sign of the severity of the crisis, ratings agency Standard & Poor's cut Ukraine's credit rating for the second time in three weeks on Friday, citing the increased risk of default.

S&P said latest developments in the crisis made it less likely that Ukraine would receive desperately needed Russian aid. Ukraine cancelled a planned issue of 5-year Eurobonds worth $2 billion, it told the Irish Stock Exchange where the debt would have been listed. Kiev had hoped Russia would buy the bonds to help it stave off bankruptcy.

Russia's economy minister said Moscow was still undecided on the next $2 billion installment and was awaiting clarity on the government in Ukraine.

On financial markets, Ukraine's dollar bonds and the hryvnia currency firmed against the dollar from record lows hit this week on hopes for a deal.

However, RBS analyst Tatyana Orlova noted the country was still in dire financial straits. "This is not the end of the story. What I am reading is there is a deal but the devil is in the detail ... The urgent need is for a technocratic cabinet that could take steps to avert default," Orlova said.

The health ministry said 77 people had been killed since Tuesday afternoon, which meant at least 47 died in Thursday's clashes.

On Thursday, EU foreign ministers meeting in Brussels imposed targeted sanctions on Ukraine and threatened more if the authorities failed to restore calm.