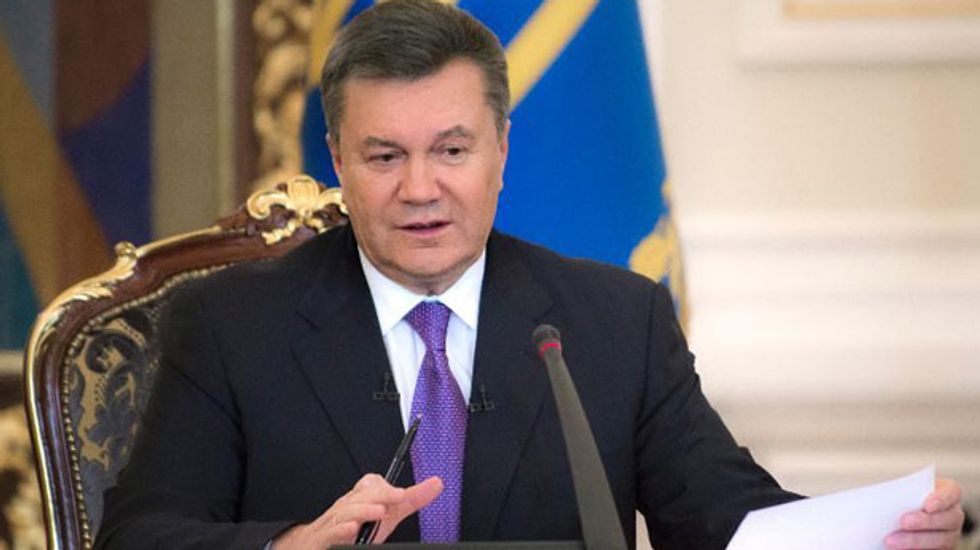 Deposed Ukrainian president Viktor Yanukovych on Thursday broke five days of silence to declare himself to still be Ukraine's head of state, as sources strongly indicated that he had taken refuge in Russia.

Yanukovych issued a defiant statement through Russia's three main news agencies, saying he had asked Russia to ensure his personal security. His comments gave no further clue about his whereabouts.

But minutes later, a high-ranking source again quoted by all the news agencies gave the strongest indication yet that he had fled Ukraine and taken refuge in Russia.

"After president Yanukovych appealed to the authorities of the Russian Federation to ensure his personal security, we can say that this request was satisfied on Russian territory," said the source, who was not named.

In the strongly-worded statement, Yanukovych said he did not consider his ousting last weekend to be legal and believed he was still Ukrainian president.

"I, Viktor Fyodorovich Yanukovych, address the people of Ukraine. I still consider myself to be the legal head of the Ukrainian state," said Yanukovych in a statement to Russian news agencies.

"There have been threats of reprisals towards me and my allies. I am compelled to ask the Russian Federation to ensure my personal security from the actions of extremists," he said.

He added that the latest decisions by the Ukrainian parliament, who have appointed an acting president in his place, "do not have legitimate character."

However Yanukovych added that he was not ordering the army to intervene.

"As the president, I did not let the armed forces of Ukraine to interfere in internal political events. I order this now as well."

"In this situation I formally announce my decision to fight to the end for the implementation of important compromise agreements to take Ukraine out of deep political crisis."

He applauded the pro-Russia Black Sea peninsula of Crimea for showing opposition to the new authorities.

"I call on the immediate return of the situation in our country to the framework of the constitution.

"Right now it is becoming evident that the people in southwestern Ukraine and the Crimea are not accepting the anarchy and de-facto lawlessness in the country, when ministers are chosen by a crowd on a square."

Yanukovych's whereabouts have been shrouded in mystery for the last days. Ukraine's new pro-EU authorities have issued an arrest warrant from him but said Wednesday they believed he was still in Ukraine.

Yanukovych arrived on Monday evening and stayed briefly in the Hotel Ukraina in Moscow before going outside Moscow to Barvikha health resort, which belongs to the Kremlin, RBK said citing its sources.

In response to the report late Wednesday, President Vladimir Putin's spokesman Dmitry Peskov told the Interfax news agency: "I do not have any such information."

Yanukovych fled Kiev late Friday after signing a tentative deal with the opposition to end the crisis, however protesters in Kiev denounced the agreement and demanded he resign. He was last seen reading a statement on a private television channel on Saturday afternoon.

Another media, Ukrainian website Glavkom.ua, reported Wednesday that Yanukovych and his younger son Viktor Jr had travelled to Russia by sea from Crimea.

The eldest son, Olexander, drove from Donetsk to Russia by road, it added.