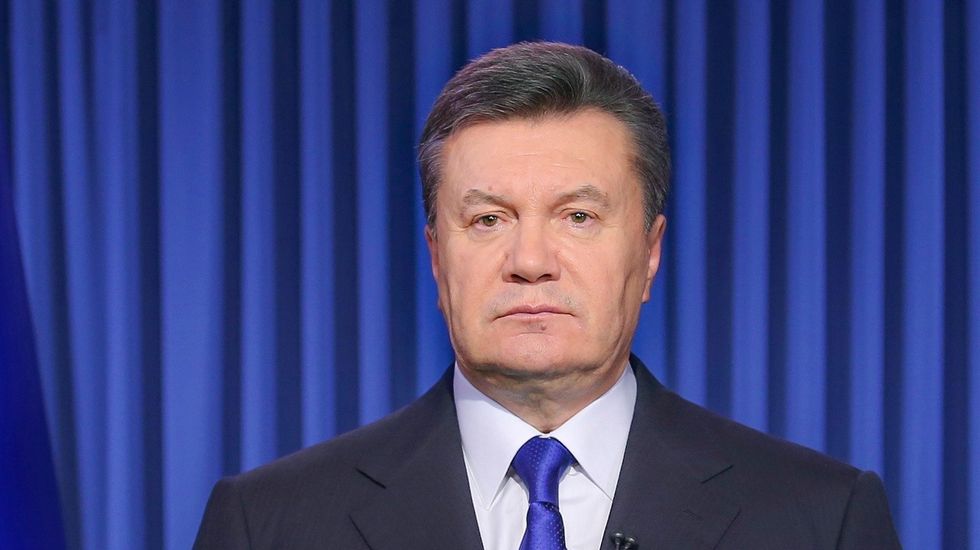 Ukraine's President Viktor Yanukovich makes a statement in Kiev February 19, 2014. Yanukovich urged leaders of the opposition on Wednesday to dissociate themselves from radicals and warned them that otherwise he will "talk differently" with them. Yanukovich also said in a statement some members of the anti-government opposition had crossed a line when they called on their supporters to bring weapons to the demonstration in the central square of Ukraine's capital, Kiev. REUTERS/Ukraine's Presidential Press Service/Handout via Reuters

Ukrainian President Viktor Yanukovich accused pro-European opposition leaders on Wednesday of trying to seize power by force after at least 26 people died in the worst violence since the former Soviet republic gained independence.

European Union leaders said they were urgently preparing targeted sanctions against those responsible for a crackdown on protesters who have been occupying central Kiev for almost three months since Yanukovich spurned a far-reaching trade deal with the EU and accepted a $15-billion Russian bailout.

The sprawling nation of 46 million people with an ailing economy and endemic corruption has become the object of a geopolitical tug-of-war between Moscow and the West. That was played out in hand-to-hand fighting through the night, lit by blazing barricades on Kiev's Independence Square, or Maidan.

Russian President Vladimir Putin's spokesman insisted the Kremlin was sticking to a policy of not intervening in Ukraine, although his point man has called for action to crush the protests. The Kremlin said Putin and Yanukovich spoke by telephone overnight, calling the events an attempted coup.

Moscow announced the resumption of stalled aid to Kiev on Monday with a $2-million cash injection hours before the crackdown began.

After a night of petrol bombs and gunfire on Independence Square, black smoke billowed from a burned out trade union building that protest organizers had used as a headquarters.

Security forces occupied about a third of the square - the part which lies closes to government offices and parliament - with protesters pouring in to reinforce their defenses on the remainder of a plaza they have dubbed "Euro-Maidan".

In a statement posted online in the early hours, Yanukovich said he had refrained from using force since unrest began but was being pressed by "advisers" to take a harder line.

"Without any mandate from the people, illegally and in breach of the constitution of Ukraine, these politicians - if I may use that term - have resorted to pogroms, arson and murder to try to seize power," the president said.

He declared Thursday a day of mourning for the dead.

A senior opposition leader, world champion boxer-turned-politician Vitaly Klitschko, walked out of a meeting with Yanukovich during the night, saying he could not negotiate while blood was being spilt.

When fighting subsided at dawn, the square resembled a battle-zone, the ground charred by Molotov cocktails. Helmeted young activists used pickaxes, and elderly women used their bare hands, to prise up paving to stock as ammunition.

The Health Ministry, updating the casualty toll, said 25 people had been killed in the fighting in the capital, of which nine were police officers. The police later said a 10th officer had died of his wounds.

Both police and opposition representatives said many were killed by gunshot and hundreds were injured. But the interior ministry said that five of the dead policemen had died of identical wounds from sniper fire to the head and neck.

Journalists saw some hardline protesters manning barricades armed with rifles, including one with a telescopic sight.

EU foreign ministers called an emergency meeting on Ukraine for Thursday and European Commission President Jose Manuel Barroso said the 28-nation bloc was set to impose sanctions against those blamed for the bloodshed.

"We have ... made it clear that the EU will respond to any deterioration on the ground," Barroso said in a statement. "We therefore expect that targeted measures against those responsible for violence and use of excessive force can be agreed by our member states as a matter of urgency."

The leaders of Germany and France, the EU's main powers, were meeting in Paris and were expected to issue a joint statement on the crisis later in the day.

French President Francois Hollande backed Poland's call for "quick and targeted sanctions against those responsible". German Chancellor Angela Merkel was "deeply saddened" by the escalation but a spokeswoman said "we are not yet there" when asked whether the time for EU sanctions had arrived.

Diplomats cautioned that any sanctions would be largely a political gesture, noting that similar Western measures had failed to sway the rulers of Belarus or Zimbabwe.

Protected by a barrier of shields, police destroyed protesters' tents and anti-government posters on the eastern side of the Kiev square.

A ring of fire blazed on a burned-out giant video screen that had relayed live pictures of opposition speakers, priests and singers addressing the crowds and leading patriotic singing.

Vesti newspaper, one of whose journalists was killed overnight, carried a simple black front page with the words in white Black Tuesday.

Protesters, many of them masked and in battle fatigues, were pouring onto the square from another direction and preparing to take on police for a second straight day.

As priests intoned prayers from a stage on the part of the square still held by protesters, young men in hard-hats were constructing forearm and knee pads - protection against baton blows. Others were pouring inflammable liquid into bottles - apparently to be used as petrol bombs.

"They can come in their thousands but we will not give in. We simply don't have anywhere to go. We will stay until victory and will hold the Maidan until the end," said a 44-year-old from the western region of Ternopil who gave only his first name of Volodymyr.

"We will stay until victory. We want our children to grow up in a normal country where there are civilized laws not the laws of a prison colony," said Vitaly, aged 36.

Yanukovich urged leaders of the opposition to dissociate themselves from radicals amid signs that activists in the strongly pro-European western part of the country were trying to take over from the authorities.

Traffic entering Kiev was restricted and the underground railway closed to prevent protesters getting reinforcements.

Nationwide demonstrations erupted in November after Yanukovich bowed to Russian pressure and pulled out of a planned far-reaching association agreement with the EU.

Western powers warned Yanukovich against trying to smash the demonstrations, urging him to turn back to the European Union and the prospect of an IMF-supported economic recovery, while Russia accused them of meddling.

Ukraine has been rocked periodically by political turmoil since independence from the Soviet Union more than 22 years ago, but it has never experienced violence on this scale.

"We are now facing of one of the most dramatic episodes in Ukrainian history," opposition leader Arseny Yatsenyuk said in a video message after the talks with the president failed.

As the security forces moved forward, Klitschko reacted defiantly, telling supporters on the square: "We will not leave here. This is an island of freedom. We will defend it."

Monday's $2 billion payment was seen as a signal that Russia believed Yanukovich had a plan to end the protests and had dropped any idea of bringing opposition leaders into government.