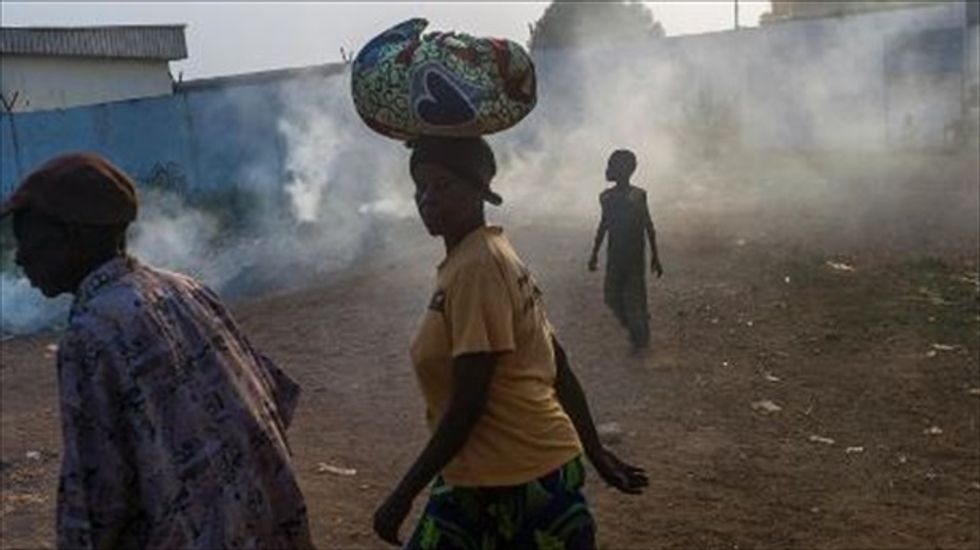 UN Secretary General Ban Ki-moon called Thursday for the urgent deployment of at least 3,000 extra troops to the Central African Republic to protect civilians against the country's spiralling violence.

Speaking before the UN Security Council, Ban appealed for more military forces to be sent "in the coming days or weeks" and asked that they be equipped "with air mobility."

The Central African Republic, which has a long history of coups and rebellions since independence from France in 1960, has been gripped by turmoil since mostly Muslim rebels overthrew the government last March.

Rogue rebels went on the rampage against civilians, prompting Christians to set up self-defence militia that have in turn been accused of atrocities against the Muslim minority.

French and African Union forces have struggled to restore security to the capital, Bangui, where they are based, let alone across the rest of the sprawling nation.

"We need more," Ban said, following weeks of Muslim-Christian bloodshed which has left hundreds dead and hundreds of thousands displaced following a surge in killings, mutilations and rapes.

"The international community must act decisively now to prevent any further worsening of the situation and to respond to the dire needs of the country's people," Ban said, describing the violence as a "calamity with a strong claim on the conscience of humankind."

Ban's call for more troops, combined with a call for donor countries to give more money to its Central African Republic appeal, came less than a week after France and the European Union pledged to bolster their forces.

The EU last Friday said 1,000 troops from the bloc would be on the ground "very, very soon" while France confirmed it was boosting its presence to 2,000 military personnel.

However senior UN officials on the ground in Bangui on Thursday said even greater numbers were needed.

Troops from France's Operation Sangaris and the 6,000-strong African Union-backed force MISCA are doing a "good job" but need reinforcements to contain the bloodshed, UN humanitarian chief Valerie Amos said at the close of a two-day visit.

"There are not enough troops on the ground. So there are discussions going on right now about how can we further support those forces immediately with additional personnel," Amos told reporters.

She said there was also a discussion on "whether or not the MISCA mission should become a UN peacekeeping mission in the long term."

Rocket and grenade explosions had echoed around the capital on Wednesday after clashes between international peacekeepers and militias.

In his speech to the Security Council, Ban called on nations to show increased generosity toward CAR, noting that the UN has only so far raised 15 percent of the $551 million it proposed in its appeal for 2014.

About one million people have fled their homes because countries of the violence, and the United Nations says 1.3 million -- more than a quarter of the population -- need immediate food aid.

During her visit, Amos met interim president Catherine Samba Panza, who is tasked with restoring security and a functioning state after taking over last month when coup leader Michel Djotodia was forced to step down under international pressure.

Amos also visited the northwestern town of Bossangoa, where the mainly Christian "anti-balaka" (anti-machete) militia first emerged, and said she was "shocked" by the sight of burnt houses and terrified civilians sleeping in the forest or in camps for the displaced.

The head of UNAIDS, Michel Sidibe, who was also on the trip, described the conditions as "desperate".

"The human suffering and misery must end," he said in a statement. "We must ensure the existence of minimum security conditions so that people can return to their homes without fear of violence."

UNAIDS warned there was also "an alarming number of reports of sexual attacks" on women and girls at camps for the displaced.