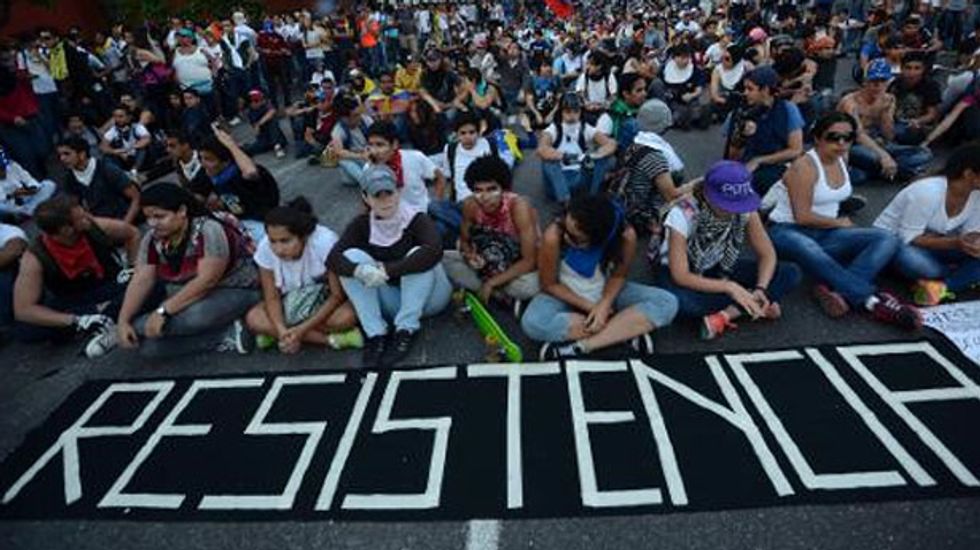 Maduro's order came on the same day that fugitive opposition leader Leopoldo Lopez re-appeared and called for a mass rally on Tuesday and challenged the government to arrest him at the event.

Nearly two weeks of anti-government protests spearheaded by students have become the biggest challenge to Venezuela's socialist rulers since the death of longtime leader Hugo Chavez in 2013.

The oil-rich country is mired in a deep economic crisis that critics blame on policies that Maduro largely inherited from Chavez.

Strict controls on currency and prices have created huge bottlenecks that have fueled inflation and emptied store shelves.

"I have ordered the foreign ministry to proceed with declaring those three consular officials persona non grata and expelling them from the country. Let them go conspire in Washington!" Maduro said in a nationally broadcast address.

Maduro said the US diplomats, who have not been named, had met with students involved in anti-government protests under the pretense of offering them "visas to the United States."

In late September Maduro kicked out three other US diplomats, including the charge d'affairs Kelly Keiderling, on accusations of conspiring with government opponents. The two countries have had no ambassadors since 2010.

A foreign ministry statement also said that Maduro's government "flatly rejects" remarks by US Secretary of State John Kerry on Saturday voicing alarm at the violence during the marches and criticizing the arrest of protesters.

Kerry's statement is "yet another maneuver" by Washington to "legitimize attempts to destabilize the Venezuelan democracy unleashed by violent groups in recent days," the ministry said.

During a failed two-day coup against Maduro's predecessor in 2002, the United States showed support for an interim leader and not the elected president at the time, staunch US critic Chavez -- a move that undermined US credibility in the region.

Kerry had voiced alarm Saturday at the "senseless violence" that has broken out during protests, and said he was particularly concerned over an arrest warrant issued for opposition leader Lopez.

As Maduro focused his ire on Washington he received a provocative challenge from Lopez, the man he blames for violence during last week's protests in which three people died.

"This Tuesday the 18th, I would like to invite you all to march together from Plaza Venezuela ... to the Justice Ministry," said Lopez, head of the Popular Will party, in a video posted on his Twitter account.

"If anyone has decided to illegally arrest and jail me, you know I will be there," he said. "I have nothing to fear; I have not done anything illegal."

An estimated 3,000 people took part in an opposition rally in Caracas on Sunday, and a fresh rally is planned for Monday.

Since late Wednesday, each night the protests end in violence, with wounded protesters, broken windows and damaged property.

Maduro blames right-wing infiltrators for fomenting the unrest. The student protesters say however that pro-government hooded assailants are responsible for the violence.

"We are going to continue in the streets, without violence," Gabriela Arellano, a student leader from the University of the Andes, told a crowd on Sunday, demanding that Maduro disarm the "collectives," a reference to pro-government civilian support groups.

Henrique Capriles, another top opposition leader who narrowly lost to Maduro in last year's election to succeed Chavez, said it was "obvious" that the government was trying to create a distraction from the country's huge economic problems.

"There is so much unhappiness out there," said Capriles, referring to the 50-plus percent inflation rate and a major surge in violent crime.

He urged the protesters to keep the demonstrations peaceful, and called on Maduro to disarm the pro-government groups.

Capriles ran last year as the sole candidate for a united opposition, but has split with Lopez over the latter's attempt to force a government change through street protests.