Violence in the streets as Venezuelan security forces clash with students 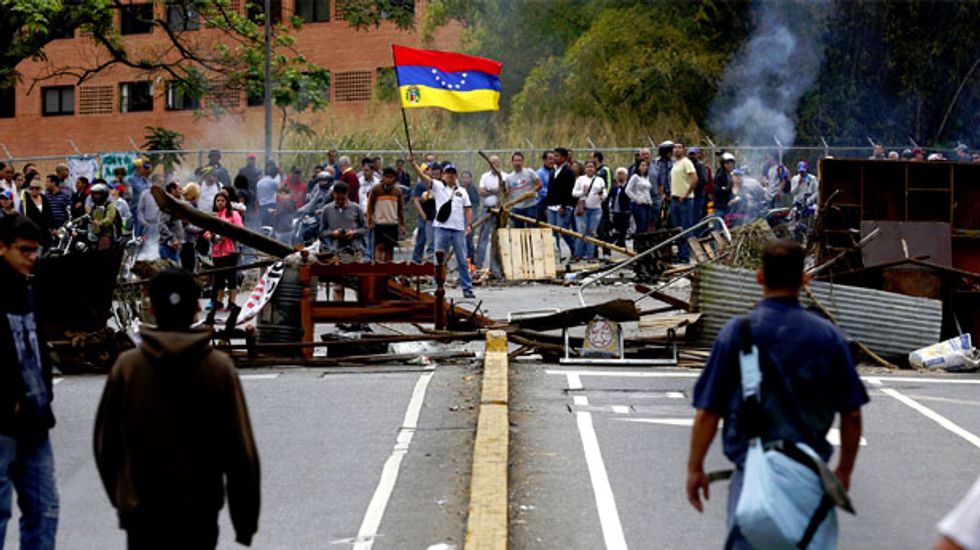 By Andrew Cawthorne and Daniel Wallis

At least five people have died since the unrest turned violent last week, with scores of injuries and arrests.

It was one of the worst bouts of violence the capital has seen in nearly three weeks of unrest across Venezuela, and trouble also flared in other urban centers.

Many Caracas residents banged pots at windows in a traditional form of protest, and knots of demonstrators were out again early on Thursday.

"I declare myself in civil disobedience," read one banner held up by demonstrators spread across a Caracas road.

The government said a funeral parade for deceased folk singer Simon Diaz, a beloved figure who died on Wednesday aged 85, was held up due to "violent groups" blocking roads.

There was unrest too in the western Andean states of Tachira and Merida that have been especially volatile since hardline opposition leaders called supporters onto the streets in early February demanding Maduro's departure.

In the city of San Cristobal, which some residents are describing as a "war zone", many businesses remained shut as students and police faced off in the streets again on Thursday.

Maduro said "special measures" would be taken to restore order in Tachira. "We won't let them turn it into a Benghazi," he said, referring to the violence-wracked Libyan city.

Tensions have escalated since opposition leader Leopoldo Lopez, a 42-year-old Harvard-educated economist, turned himself in to troops this week. He is being held in Caracas' Ramo Verde jail on charges of fomenting the violence.

"Change depends on every one of us. Don't give up!" Lopez's wife Lilian Tintori said via Twitter on Thursday.

Local TV channels are providing almost no live coverage of the unrest, so Venezuelans are turning to social media to swap information and images, though falsified photos are circulating.

Both sides rolled out competing evidence of the latest violence on Thursday, with ruling Socialist Party governors showing photos and video of charred streets and torched vehicles, while the opposition posted footage of brutal behavior which they said was by national guard troops.

Caracas was calmer by lunchtime on Thursday, though there was less traffic than normal and some businesses were closed, in a further drag on the already ailing economy.

Maduro, narrowly elected last year to succeed socialist leader Hugo Chavez after his death from cancer, says Lopez and others are in league with the U.S. government and want a coup.

The latest direct victim of the unrest, college student and local beauty queen Genesis Carmona, 22, was shot in the head during a demonstration in the central city of Valencia.

Maduro says "fascist groups" are trying to create a crisis to topple his administration.

"There is an international campaign to justify a foreign intervention in Venezuela," he said in a combative, nationally televised address late on Wednesday.

Speaking in Mexico, U.S. President Barack Obama criticized Maduro's government for arresting protesters and urged it to focus on addressing the "legitimate grievances" of its people.

Street protests were the backdrop to a short-lived coup against Chavez in 2002 before military loyalists and supporters helped bring him back. There is no evidence the military, which was the decisive factor in 2002, may turn on Maduro now.

Detractors call Lopez a dangerous hothead. He has frequently squabbled with fellow opposition leaders and was involved in the 2002 coup, even helping arrest a minister.

Though the majority of demonstrators have been peaceful, an increasingly prominent radical fringe has been attacking police, blocking roads and vandalizing buildings.

Though the Caracas protests began and are still strongest in middle-class neighborhoods, sporadic demonstrations have also spread to poorer areas of the city, residents say.

Rights groups say the police response has been excessive, and some detainees say they were tortured.

"How many more deaths do they want?" he told reporters on Thursday, urging opposition activists to avoid violence.