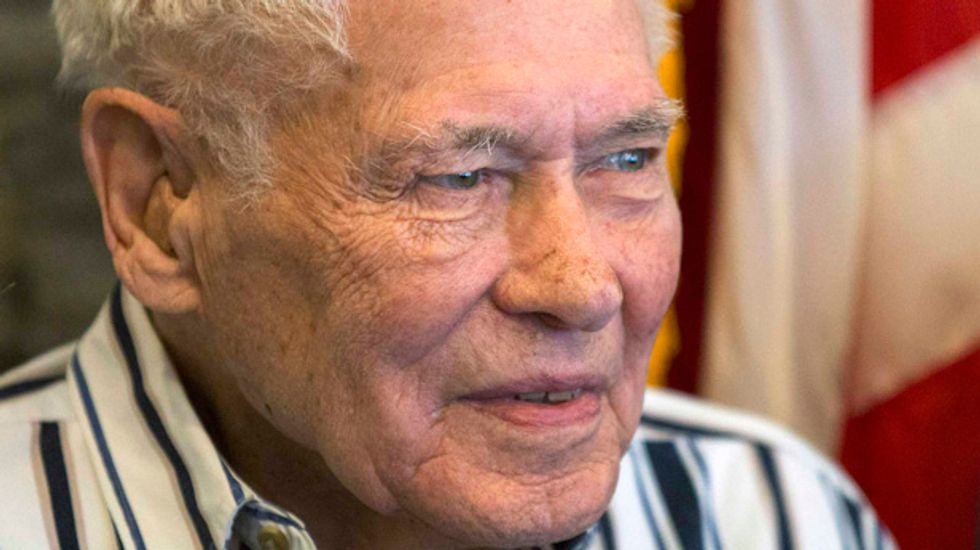 World War II veteran Richard "Dick" Faulkner smiles during a ceremony before receiving the Purple Heart in Auburn, New York March 8, 2014. Faulkner was wounded when his plane crashed in occupied France in 1944 and was honored with the medal he declined 70 years ago. REUTERS/Mike Bradley (UNITED STATES - Tags: CONFLICT SOCIETY MILITARY POLITICS)

AUBURN, New York (Reuters) - An 89-year-old U.S. World War Two veteran who was wounded when his plane crashed in occupied France in 1944 received a Purple Heart medal on Saturday, an honor he declined 70 years ago.

Richard Faulkner was a 19-year-old staff sergeant when the B-17 bomber in which he was flying on his first combat mission collided with an allied aircraft. All aboard were killed except Faulkner, who parachuted to safety and was stranded behind enemy lines.

"It's just unbelievable that they all died and I didn't," Faulkner said in an interview before the awards ceremony at his retirement community in Auburn, New York, about 200 miles northwest of New York.

When he escaped Nazi-controlled territory Faulkner was offered the Purple Heart, but he declined it. He had a hard time accepting the tragedy, he said.

The Purple Heart is awarded to members of the U.S. armed forces who are wounded in battle and posthumously if they are killed in action or die after being wounded in action.

About a year ago Faulkner found himself regretting his decision because he wanted his grandchildren to have something by which they could remember his military service, said his daughter-in-law Mary Ellen Faulkner.

She said the veteran had felt awkward about receiving an award given the deaths of the other servicemen.

She contacted her father-in-law's congressman, Democrat Dan Maffei, whose office determined that the veteran was still eligible to receive the medal.

Maffei presented the Purple Heart to Faulkner before about 100 people including family and friends.

"To me meeting Mr. Faulkner is like meeting a hero from history ... but live in the flesh," Maffei said.

The veteran declined to speak after receiving the award, but told Maffei, "Thanks."

Faulkner was in the gun turret under the belly of the B-17 when the accident occurred, slicing his plane in two. He parachuted out.

German soldiers searched for him, but the wounded airman hid and was sheltered in a hayloft by a farmer.

Faulkner connected with French resistance fighters, who helped him get to the coast, where downed Allied airmen were picked up by British ships.

When the torpedo boat that rescued Faulkner was attacked by German aircraft, he took up gunner duties to replace a man who was killed by enemy fire.

Faulkner made it to Britain on April 16, 1944, after 29 days behind enemy lines. After the war, Faulker became a power company lineman, married and had three children.