A million times brigher than the sun: Astronomers reveal 'largest yellow star ever' 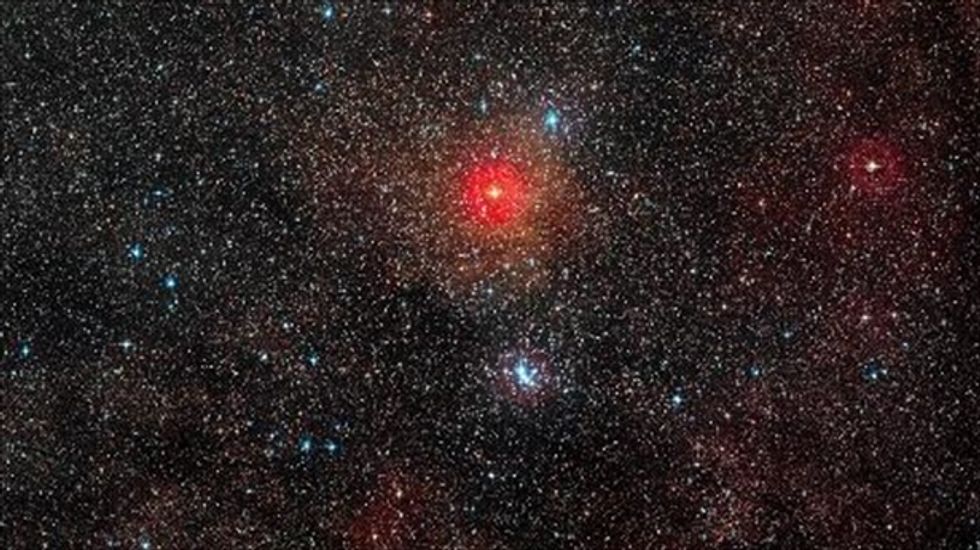 A European Southern Observatory photo shows the HR 5171, the brightest star just below the centre of this wide-field image, which is a yellow hypergiant, on March 10, 2014 [AFP]

Astronomers have spotted the largest yellow star ever observed in our galaxy and 1,300 times larger than the sun.

The yellow hypergiant star HR 5171 A is also in the top-10 of the largest stars known and about one million times brighter than the sun, Olivier Chesneau, whose team made the discovery, said Wednesday.

Despite its great distance of nearly 12,000 light-years from earth, the object can just about be seen with the naked eye.

"The new observations also showed that this star has a very close binary partner, which was a real surprise," said Chesneau, of the Observatoire de la Cote d'Azur, in Nice, France.

"The two stars are so close that they touch and the whole system resembles a gigantic peanut."

His team estimated the star is 50 percent larger than the famous red supergiant Betelgeuse.

Yellow hypergiants are very rare, with only a dozen or so known in our galaxy.

HR 5171 A has been getting bigger over the last 40 years, cooling as it grows, the astronomers said.

Chesneau and an international team used a Very Large Telescope Interferometer (VLTI) of the European Southern Observatory in Paranal, Chile.

A technique called interferometry combines light collected from multiple individual telescopes to effectively create a giant telescope up to 140 metres (460 feet) in size.