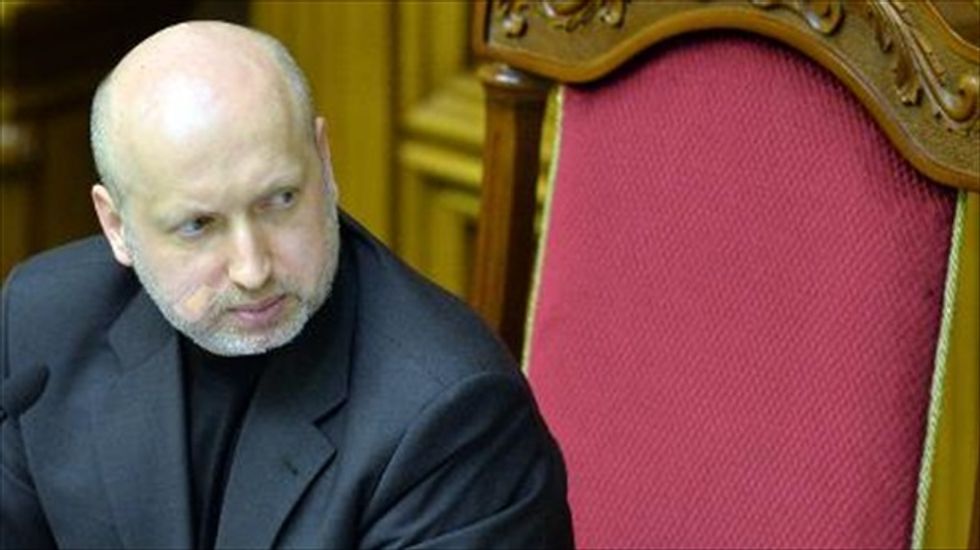 Ukraine will not intervene militarily in the separatist peninsula of Crimea, in order to avoid exposing its eastern border, Ukraine's acting president told AFP Tuesday in an exclusive interview.

In his comments, Oleksandr Turchynov, who came to power last month after violent protests brought down the previous pro-Moscow government, also slammed an upcoming referendum on Crimea as a "sham", the results of which will be fixed in Moscow.

"We cannot launch a military operation in Crimea, as we would expose the eastern border (close to Russia) and Ukraine would not be protected," Turchynov said as Crimea -- a southeastern peninsula that has come under the de facto control of Russian forces -- prepares to vote in a referendum Sunday on joining Russia.

"What they call the referendum will not happen in Crimea but in the offices of the Kremlin," the president said, hours after the pro-Russian authorities in the Black Sea peninsula voted for full independence from Ukraine, further escalating what has already turned into the worst East-West crisis since the Cold War.

"It's a sham, most of the people of Crimea will boycott this provocation," he added.

"The Russian forces don't intend to hold a referendum, they're just going to falsify the results."

World powers have repeatedly called for Moscow and Kiev to come together to seek a solution to the escalating crisis in Ukraine's autonomous region of Crimea, but Turchynov said Russia's leaders were refusing any dialogue with their Ukrainian counterparts.

"Unfortunately, for now Russia is rejecting a diplomatic solution to the conflict," he told AFP.

"They are refusing all contact at foreign ministry and top government level," he added as Western powers, led by Germany, continued to push for the creation of a contact group to avert full-fledged war.

Turchynov, who was speaking to AFP after a meeting of the national security and defence council in Kiev, will have just a brief mandate, with snap presidential elections scheduled on May 25 in which he does not plan to stand.