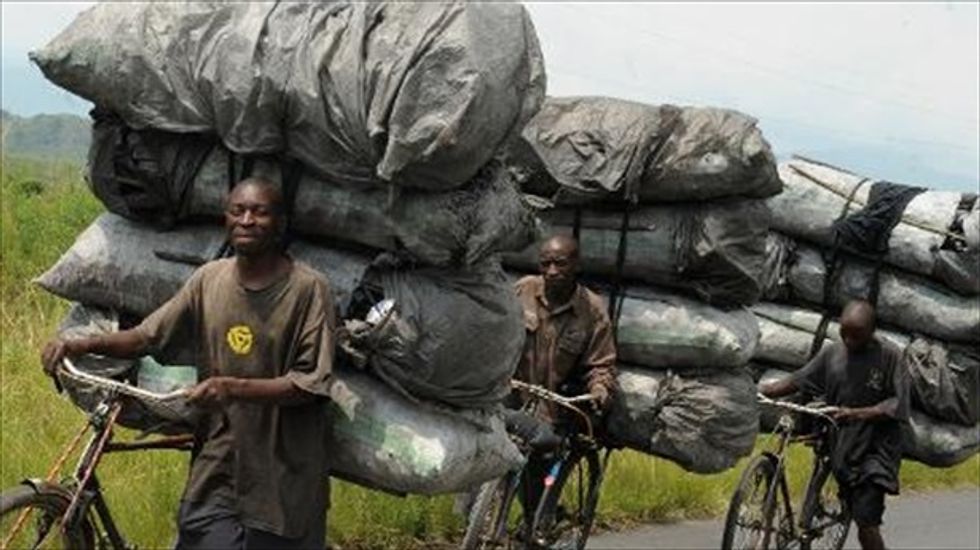 Congolese charcoal dealers push their bicycles up the hill as they transport their produce to the market in Sake, North Kivu [AFP]

With its exploding urban population burning ever more coal and wood, Africa could contribute as much as 55 percent of the world's particle pollutants by 2030, a study said Tuesday.

In 2005, the continent's global share of these atmospheric pollutants ranged from a five percent for sulphur dioxide and nitrogen oxide to 20 percent for organic carbon, according to the findings published in the journal Environmental Research Letters.

It was about 10 percent each for black carbon, carbon monoxide, and non-methane hydrocarbons.

"A considerable increase in emissions from Africa is... expected in 2030 if no regulations are implemented," wrote the study authors from France and the Ivory Coast.

The particles are released in burning petrol and diesel for car and motorcycle combustion, and coal, fuel wood, charcoal and animal waste incinerated for heating and cooking.

The study said Africa could represent 40 percent of the world population by 2100 and its urban population could double from 2000 to 2030 -- along with rapid growth in mining, oil and industrial activities.

"In western and eastern Africa, action on biofuels would be the most efficient way to decrease domestic emissions... not to mention the decrease in the use of two-wheeled vehicles," the authors wrote.

"In southern Africa, action on coal would be the most efficient way to decrease industrial and power plant emissions."

These tiny particles can cause asthma and allergies, respiratory and cardiovascular ailments and the smallest among them, which can enter the bloodstream and lungs, have been classified as cancer-causing by the World Health Organisation (WHO).