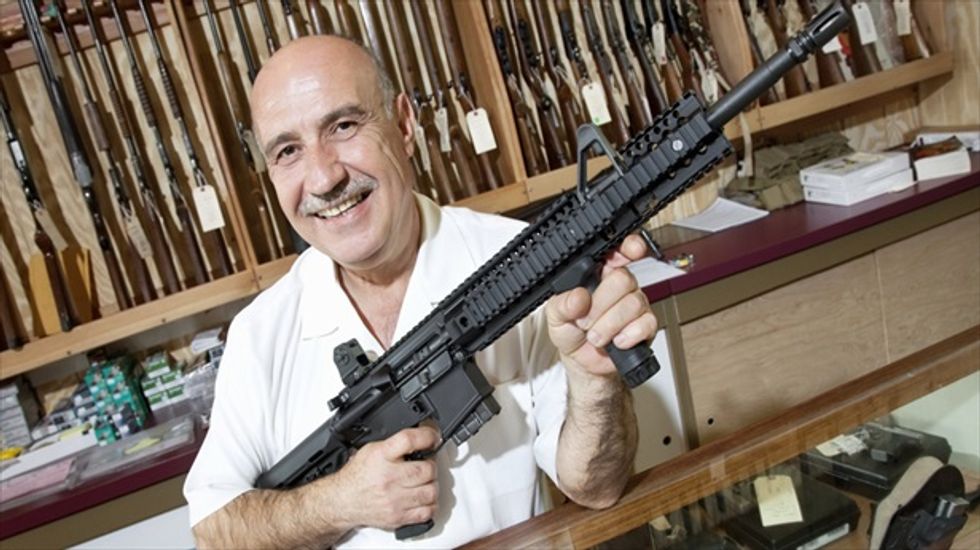 The Alabama state lawmaker behind a bill critics say could enganger pregnant women has introduced another bill that would institute a sales tax "holiday" on firearms sales.

The Montgomery Advertiser reported on Monday that state Rep. Becky Nordgren's (R) bill would enable guns, ammunition and firearm supply buyers to not have to pay sales tax on the weekend preceding the July 4th holiday. Nordgren told the Advertiser she felt the tax break would boost tourism from nearby states.

"Once it catches on, I can see our Fourth of July weekends benefitting from the promotion," Nordgren was quoted as saying. "Maybe we'll see some gun shows. That would get people here to stay the weekend."

Alabama already has similar programs in effect for purchasing school supplies on a weekend preceding the school year, and preparing for severe weather. The weather holiday was held between Feb. 21 and Feb. 23, and the school supply holiday is scheduled for this coming August.

State Legislative Fiscal Office director Norris Green said the school supplies holiday costs around $3.4 million per year, while the holiday related to buying emergency supplies cost the state about $2 million. Sales tax revenue typically goes to funding the state's public and post-secondary schools. The potential cost of Nordgren's proposal has not been assessed.

Nordgren was jeered by Democratic lawmakers in January when she introduced a bill that would enable health care providers from refusing to perform abortions, embryonic stem cell research, sterilization, and human cloning procedures.

"This is a feel-good bill to me," state Rep. Patricia Todd (D) told Nordgren. "This is like, 'I want to throw some red meat to make them see that, you know, I really am against abortion.' When the reality is a health care professional can always opt-out of doing a procedure."

The American Civil Liberties Union also criticized the cloning bill, saying it would open up the possibility of a woman suffering a miscarriage being refused abortion services, even at the risk of her own health.

The bill passed the state House by a 71-24 vote and has since been referred to the state Senate Health Committee for review.

[Image: "A Happy Middle-Aged Merchant With Rifle In Gun Shop" via Shutterstock]