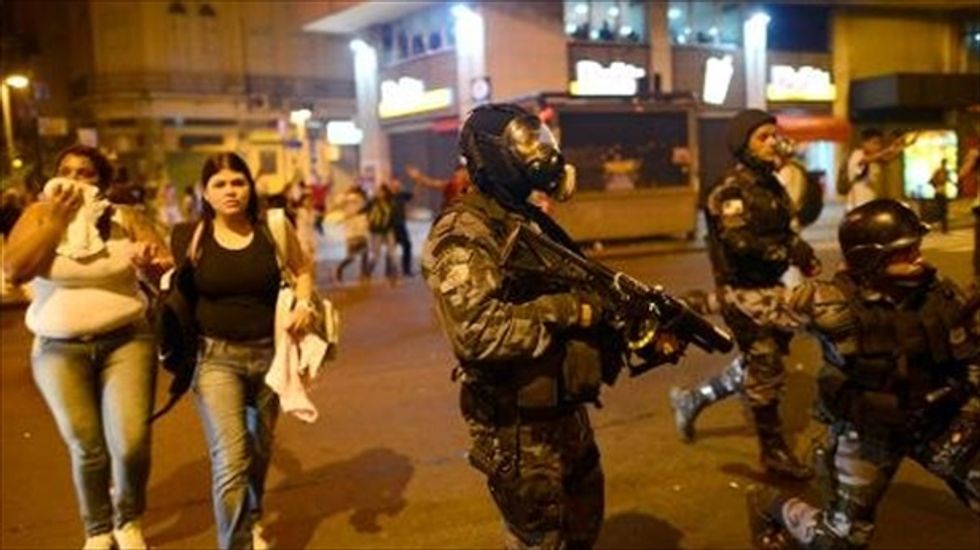 Women walk by as the riot police is confronted by demonstrators after clashes erupted during a protest in Rio de Janeiro, on June 20, 2013. [AFP]

Around 150 people gathered Wednesday in Rio to protest against Brazil hosting the World Cup, with legendary star Pele blasted as a "traitor" for backing the event, an AFP reporter said.

"There will be no Cup, no election," demonstrators angry at the multi-billion-dollar cost of event chanted, while one banner read "Pele, traitor of the century."

Pele helped Brazil to its first three World Cup titles but both he and 2002 champion Ronaldo, on this year's organizing committee, were lambasted by the group as "enemies of the people."

Pele is an honorary ambassador for the tournament, which kicks off on June 12, but his backing has angered some in a country where many say the cash should have been spent on improving public services.

"They (Pele and Ronaldo) were great players but now they are out of touch -- it's a shame," said one demonstrator, 32-year-old Carolina.

Another demonstrator, Eron Morais de Melo, dressed as Batman, said violence at some protests had frightened many people away.

But he predicted they would be larger in scale once the World Cup begins.

Large protests at last year's Confederations Cup caught authorities by surprise as more than a million people took to the streets, their ire initially fueled by the rising cost of public transport.

As the unrest grew, demonstrators slammed the cost of staging the World Cup, estimated at $11 billion, and also the 2016 Rio Olympics in a country where public facilities are crumbling and political corruption rife.

A further demonstration is set for Sao Paulo on Thursday.

Several recent demonstrations have ended in violence with clashes between anarchist groups known as Black Bloc and police.

In February, a television cameraman died from his injuries after he was struck in the head by a flare thrown by a protester in Rio.