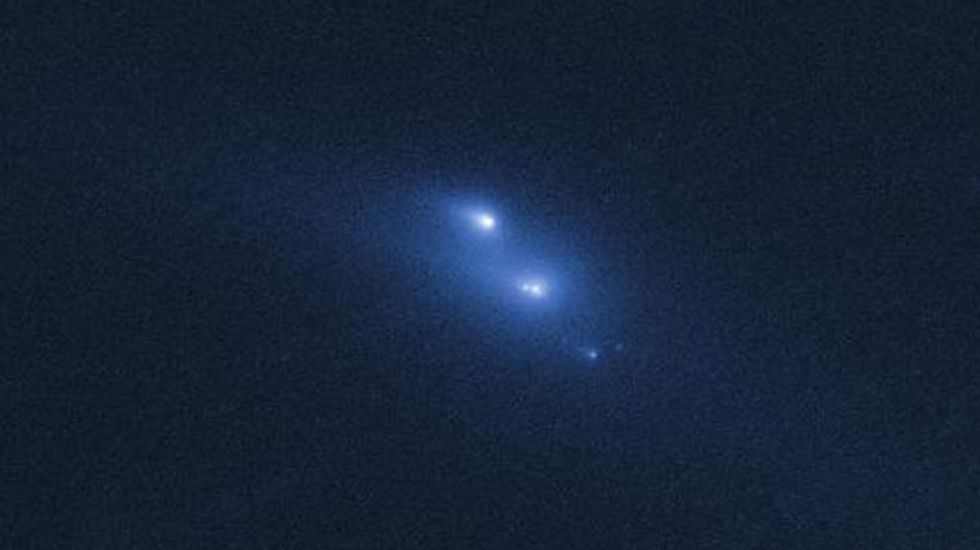 Astronomers said Thursday they have witnessed the distant break-up of an asteroid, a rare event that was not caused by a violent space collision or a close encounter with the Sun.

Instead, the asteroid, located some 300 million miles (483 million kilometers) from the Sun, was likely weakened over time by multiple small run-ins with other space objects, said the report in Astrophysical Journal Letters.

And now, astronomers are watching asteroid P/2013 R3 come undone as a result of a subtle effect of sunlight, which causes the asteroid to rotate at an increasingly fast rate.

"Seeing this rock fall apart before our eyes is pretty amazing," said lead investigator David Jewitt, a professor in the University of California Los Angeles Department of Earth, Planetary and Space Sciences.

Jewitt said the asteroid has broken into as many as 10 pieces and is gently being pulled apart by centrifugal force, "like grapes on a stem."

The photographs of the break-up were captured by the Hubble Space Telescope.

Each of the 10 parts have comet-like dust tails, and the biggest four chunks are each double the size of a football field.

The latest Hubble pictures show the fragments "drifting away from each other at a leisurely pace of one mile per hour ? slower than a strolling human," said a UCLA press statement.

Eventually, the fragments, which are estimated to weigh 200,000 tons, will provide a rich source of meteoroids.

Most of them will plunge into the Sun although some may be witnessed as meteors across the Earth's sky, Jewitt said.

The Hubble Space Telescope is a collaborative project between NASA and the European Space Agency.