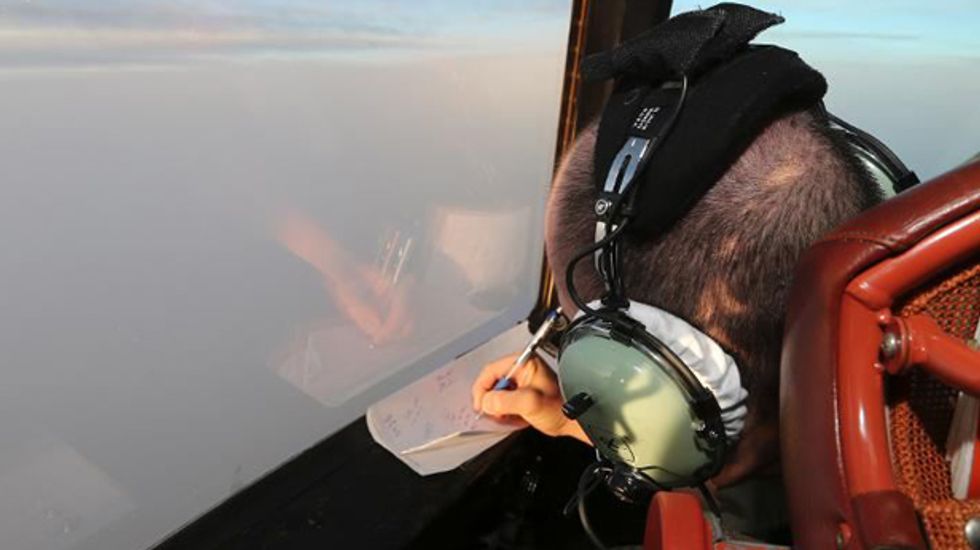 Australia raised hopes Sunday that the mystery of missing Malaysia Airlines Flight MH370 could be solved after unidentified debris was spotted and China and Japan piled extra resources into the growing international search effort.

"It's still too early to be definite, but obviously we have now had a number of very credible leads and there is increasing hope -- no more than hope, no more than hope -- that we might be on the road to discovering what did happen to this ill-fated aircraft," he said.

Abbott spoke after several unidentified objects were seen in the remote and inhospitable search zone about 2,500 kilometres (1,500 miles) off Perth.

He detailed "a number of small objects fairly close together within the Australian search zone, including, as I understand it, a wooden pallet."

His comments came hours after the Australian Maritime Safety Authority (AMSA) announced that "further attempts will be made to establish whether the objects sighted are related to MH370," on Sunday.

Abbott did not specifically mention a Chinese satellite image dated March 18 and released on Saturday, which showed a 22.5-metre (74-foot) long piece of debris.

The location was just 120 kilometres (75 miles) from where March 16 satellite images -- released by Australia on Thursday -- had shown two large items at sea.

"The object was not sighted on Saturday. AMSA will take this information into account in tomorrow's (Sunday's) search plans," a statement said, referring to the new Chinese imagery.

Beijing and Tokyo were each sending two aircraft to join the six already involved in the huge operation backed by the United States and New Zealand.

"And obviously before we can be too specific about what it might be, we do actually need to recover some of this material."

- 'We owe it to their grieving families' -

"It is a very important humanitarian exercise. We owe it to the almost 240 people on board the plane, we owe it to their grieving families, we owe it to the governments of the countries concerned, to do everything we can to discover as much as we can about the fate of MH370."

China has dispatched seven ships to the hunt for the plane, state media reported Friday, adding to British and Australian naval assets involved.

Despite the sightings and favourable weather conditions AMSA said nothing was found on Saturday.

"A civil aircraft... reported sighting a number of small objects with the naked eye, including a wooden pallet, within a radius of five kilometres," AMSA said.

"A Royal New Zealand Air Force P3 Orion aircraft with specialist electro-optic observation equipment was diverted to the location, arriving after the first aircraft left but only reported sighting clumps of seaweed."

The Orion dropped a marker buoy to track the movement of the material and a merchant ship in the 36,000-square-kilometre area was tasked with relocating and seeking to identify the material.

In Beijing, Chinese foreign ministry spokesman Hong Lei said Saturday that further analysis was needed to determine if the object seen on a satellite image was related to the missing plane.

"China hopes that these data will be helpful for searching and rescuing efforts," said Hong.

Two-thirds of the 227 passengers on board the missing plane were Chinese and growing anger among family members over Malaysia's handling of the crisis exploded during a meeting with Malaysian officials at a Beijing hotel.

Police intervened as relatives rushed towards the officials, demanding answers.

"Government of Malaysia, tell us the truth! Give us back our loved ones!" they shouted.

MH370 dropped off civilian radar on March 8 en route from Kuala Lumpur to Beijing, and two weeks later Malaysian investigators still believe it was deliberately diverted by someone on board.

Three scenarios have gained particular traction: hijacking, pilot sabotage, and a sudden mid-air crisis that incapacitated the flight crew and left the plane to fly on auto-pilot for several hours until it ran out of fuel and crashed.

Finding wreckage in the remote southern Indian Ocean would undermine the hijacking theory, which many relatives continue to cling to.