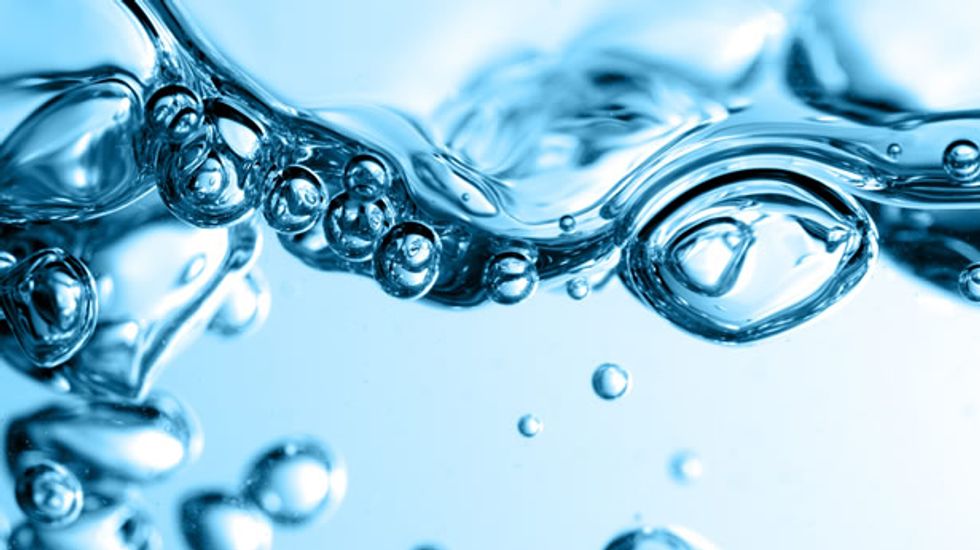 A small, battered diamond found in the gravel strewn along a shallow riverbed in Brazil has provided evidence of a vast "wet zone" deep inside the Earth that could hold as much water as all the world's oceans put together.

The water is not sloshing around inside the planet, but is held fast within minerals in what is known as the Earth's transition zone, which stretches from 410 to 660km (250-400 miles) beneath the surface.

"It's not a Jules Verne-style ocean you can sail a boat on," said Graham Pearson, a geologist who studied the stone at the University of Alberta. The water-rich zone could transform scientists' understanding of how some of the Earth's geological features arose.

Tests on the diamond revealed that it contained a water-rich mineral formed in the zone. Researchers believe that the gemstone, which is oblong and about 5mm long, was blasted to the surface from a depth of about 500km by a volcanic eruption of molten rock called kimberlite.

The battle-scarred gem has a delicate metallic sheen, but is pitted and etched from its violent journey, which probably took several days and ended with the stone shooting up through the Earth's crust at speeds of about 70km/h (40mph).

"It's a fairly ugly diamond. It looks like it's been to hell and back," said Pearson, adding that the gem was worth about $20 at most. The stone was found in 2008 by artisan miners working the Juina riverbeds in Mato Grosso in western Brazil.

Most diamonds used in jewellery form at much shallower depths, about 150km down. Those that form in the transition zone are called super-deep diamonds and are distinguished by their battered appearance and low nitrogen content.

Pearson and his team were running tests on the diamond in the hope of finding minerals they could use to work out its age. But by chance they discovered a speck of mineral called ringwoodite, a form of olivine that forms under extremely high pressures. The mineral inclusion was so small it was invisible to the naked eye.

Without the diamond - and the water-rich mineral inside it - scientists had no hope of confirming the make-up of material so deep inside the Earth's interior. "No-one is ever going to run a geological field trip to the transition zone 500km beneath the Earth's surface, and no-one is ever going to drill down to the transition zone," said Pearson. "It was a total piece of luck that we found this."

For half a century, scientists have suspected that ringwoodite made up much of the deep Earth, because olivine is so widespread underground. But no one had ever found any ringwoodite from Earth's interior that proved the idea beyond doubt. In the transition zone where the diamond and its ringwoodite formed, the pressure reaches 200,000 atmospheres.

Tests on the mineral found that around 1.5% of its weight is water. "That doesn't sound like much, but when you calculate the vast volumes of ringwoodite thought to exist in the deep Earth, the amount of water might be as high as that contained in all the world's oceans," Pearson told the Guardian. That amounts to more than one billion billion tonnes of water.

At the very least, the scientists say, there must be local wet spots or "oases" in the Earth's interior. "The beauty of this diamond is that it gives us a real sample from those depths," Pearson said. The diamond is described in the latest issue of the journal Nature.

A huge water store in the Earth's mantle might help geologists explain some oddities seen on the planet's surface. Water in the transition zone could dissolve in molten magma and reach the undersides of continental plates, where it would weaken the huge slabs of rock. That could create weak spots prone to volcanoes, and even cause "uplift", where the land rises up.

Hans Keppler at the University of Bayreuth in Germany said: "Until now, nobody had ever seen ringwoodite from Earth's mantle, although geophysicists were sure that it must exist. Most people, including me, never expected to see such a sample."