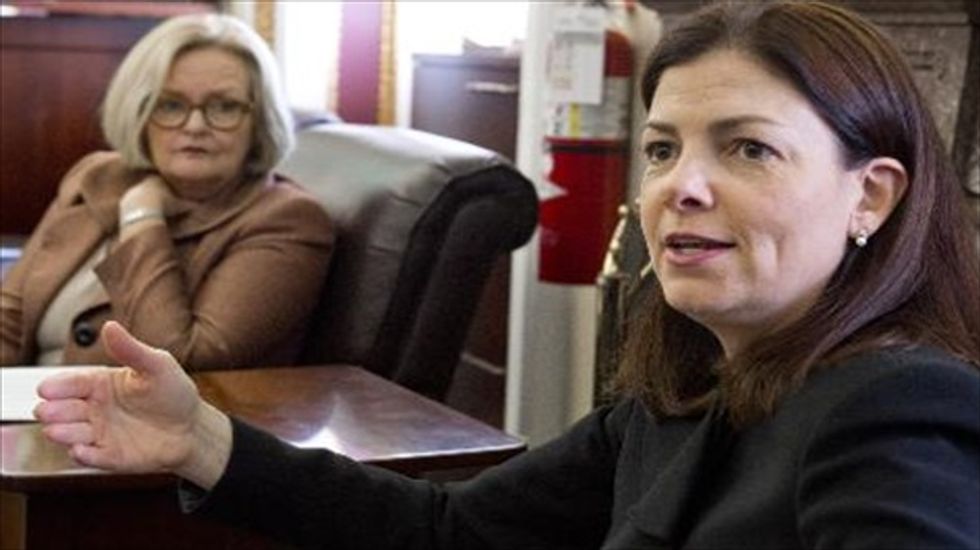 Republican Senator Kelly Ayotte (R) of New Hampshire and Democratic Senator Claire McCaskill of Missouri speak about legislation to curb rapes and sexual assaults in the US military in Washington, on Feb. 6, 2014 [AFP]

The bill passed 97-0, a rare moment of strong bipartisan cooperation in a chamber that has become known in recent months for succumbing to the very opposite, political gridlock and acrimony.

The Victims Protection Act, authored by Senator Claire McCaskill, a former sex crimes prosector, would bolster recently codified reforms that strip commanders of their ability to overturn jury convictions, assign victims their own independent legal counsel to protect their rights, and criminalize retaliation against victims who report such crimes.

The bill, which must pass the House of Representatives before it becomes law, would "ensure that victims of sexual assault in the military will be treated with dignity and responsibility," said Senator Kelly Ayotte, a Republican co-sponsor.

The reforms are part of what she called an effort to achieve "zero tolerance" and "full accountability" for commanders in their units.

The bill would gut the so-called "good soldier" defense, which allows military personnel to use their professional good standing to make their case before a military court.

"Even a successful professional can also be a sexual predator," warned Senator Carl Levin, the Democratic chairman of the powerful Senate Armed Services Committee.

McCaskill's measure is a toned down version of more aggressive legislation put forward last year by fellow Senate Democrat Kirsten Gillibrand that would have removed sex assault cases from the military chain of command.

Debate had toggled back and forth between the two measures, but lawmakers ultimately thought the Gillibrand bill was too controversial.

After months of hard lobbying, Gillibrand last week came up five votes short of the 60 her bill needed to overcome a bipartisan blocking tactic known as a filibuster.

The approved reforms ensure there is another level of review should a commander disagree with the recommendations of a prosecutor. They also mandate a dishonorable discharge for anyone convicted of sexual assault and eliminate the statute of limitations in rape and sexual assault cases.

The U.S. military has suffered a series of embarrassing setbacks as it battles a sexual assault crisis that sparked the calls for a radical overhaul of its judicial system.