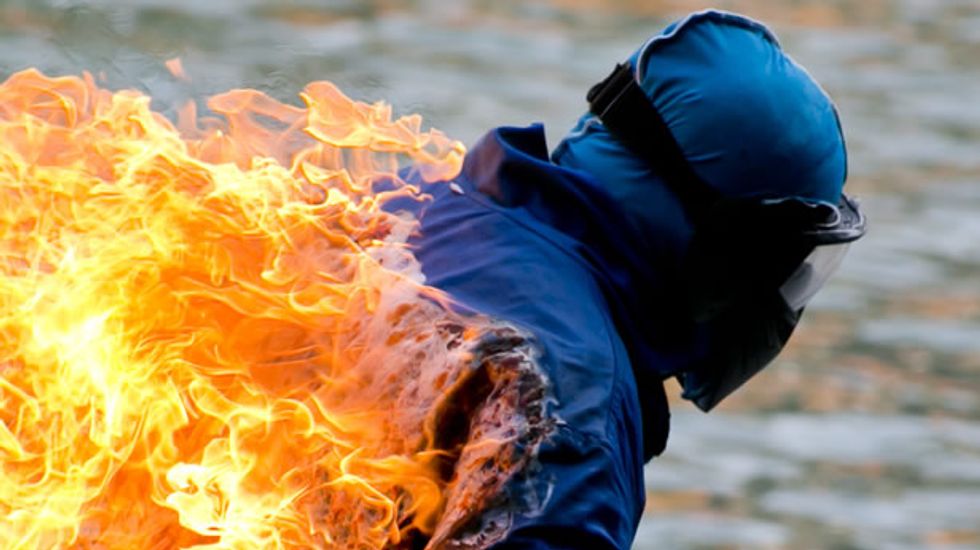 Surveillance cameras outside a home in Houston last night captured a fire-bombers' failed attempt to "shakedown" a local businessman.

According to the homeowner -- who claims to know the identity of the fire-bomber, but who would only refer to him as the "Bin Laden of the Gypsy community" -- the man seen in the video attempting to immolate the Cadillac has been shaking him down for money.

In the video, the man can been seen setting down the lit fire-bomb and smashing the Cadillac with a brick. While attempting to shatter the window, the man accidentally steps on the fire-bomb and lights his pants on fire.

The man can be seeing running away, leg aflame, before the flames spread to the car and do considerable damage to it.

The victim of this arson attack -- who wishes to remain anonymous -- says that he knows who the man in the video is. "I've been having terroristic threats," he told KPRC, "multiple threats on my life."

"This is not a feud that's going on, this is his M.O.," the homeowner said. "We want the law to take this very seriously before somebody dies or gets seriously hurt."

The Houston Police Department said that its Major Offenders's "swindle squad" is actively investigating the case.

Watch the video via KPRC below.

["Man On Fire" on Shutterstock]