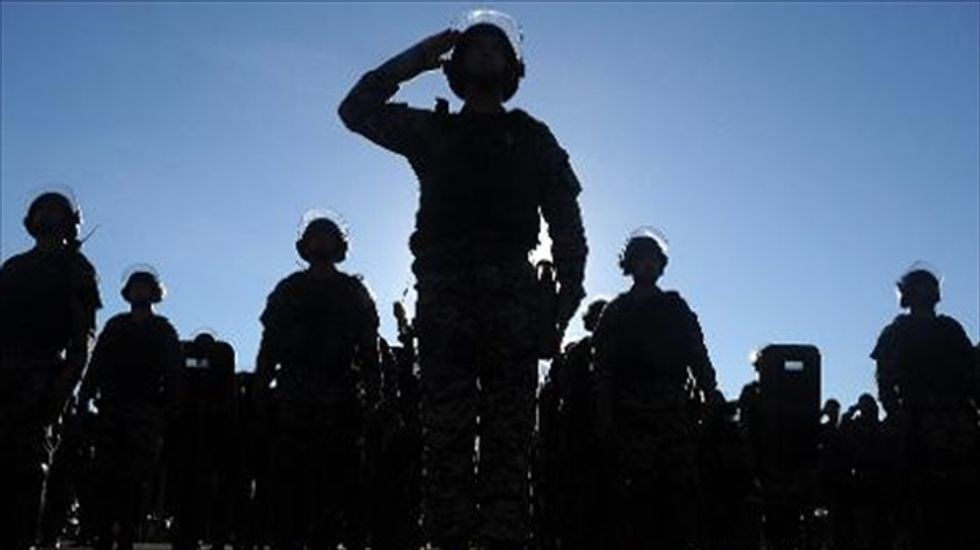 Brazil will deploy the military in slums near Rio's international airport to back up police as the city braces for the arrival of hundreds of thousands of tourists for the World Cup, authorities said Monday.

Justice Minister Eduard Cardozo announced the reinforcements, without giving troop numbers nor the start date for the operation.

"The federal government supports the Rio government in this battle with armed crime," said Cardozo.

He spoke after meeting Rio Governor Sergio Cabral and the armed forces chief of staff, General Jose Carlos de Nardi, who is in charge of planning the deployment.

"We are not thinking about (quelling violence) for the World Cup so much as about the citizens of Rio," said Rio state's secretary for security affairs Jose Mariano Beltrame.

"We are going to show who is stronger, and show that the state of Rio is stronger and the Brazilian state is stronger" than criminal gangs, said Beltrame.

The move follows a spate of attacks on Rio police in slum areas despite an intensive, years long effort to "pacify" the densely packed neighborhoods.

With the World Cup kicking off on June 12, Rio turned to President Dilma Rousseff for federal help.

Cardozo said the focus of the troop deployment would be in the sprawling Mare favela near the Galeao international airport in northern Rio.

The favela, home to 100,000 people, is a haven for gang warfare and drug-dealing near what will be the main entry point for the flood of World Cup fans.

"There are weapons and drugs, stolen cars and motor bikes and criminals who take refuge there as if it were their territory," Cabral said.

Insisting Brazil was perfectly capable of hosting an estimated 600,000 foreign World Cup tourists, Cardozo said troops would "stay as long as necessary" until a 1,500-strong Police Pacification Unit can be established in Mare.

An advance force of 120 special police already has moved into the area, the officials said.

Cabral vowed that authorities would not shrink from the task of "pacifying" violent shanty towns.

Since 2008, more than 9,000 police officers have been deployed in 38 units across 174 favelas in an attempt to 'pacify' areas in thrall to gangs and drug lords.

Michel Misse, expert on urban violence at Rio's Federal University, told AFP that bringing in the army "does not constitute a failure by local police.

"Mare is a group of complex favelas as was Alemao," another large complex of some 300,000 people which a force of some 2,600 police and military entered in 2010 after bloody clashes had claimed 35 lives.

"It is a show of force to reduce the risk to police, a symbolic aspect to show the force of the state against criminals," Misse said.