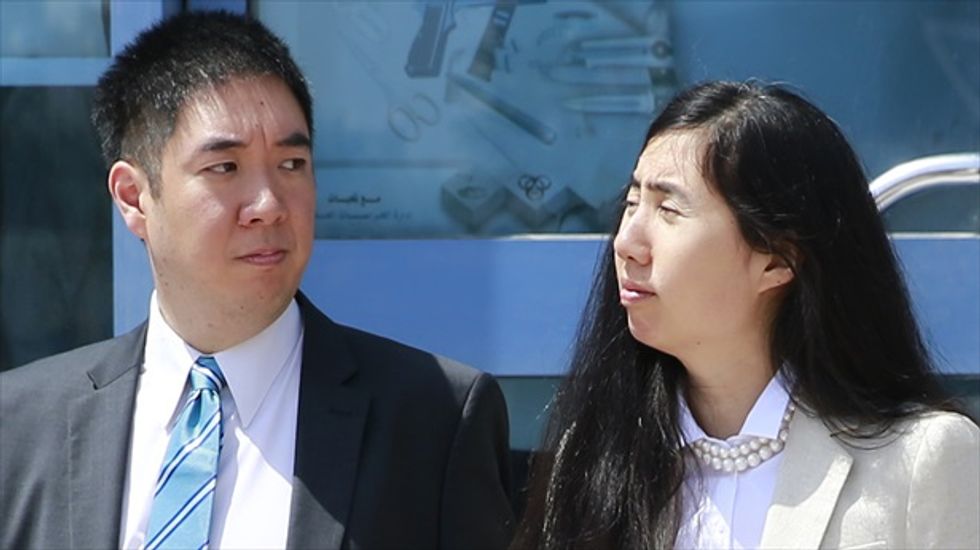 DOHA (Reuters) - A Los Angeles couple was sentenced to three years in jail in Qatar on Thursday for causing the death of their adopted African-born daughter, who was found to have died of starvation, in a case that has raised concern in Washington.

An autopsy found that she had died of "cachexia and dehydration", while the prosecutor charged the couple with "murder with intent by forced starvation". Cachexia is an irreversible loss of body mass.

The couple argued that Gloria had been suffering from malnutrition-related diseases since they adopted her from Ghana at the age of 4, and that the Qatari authorities had failed to acknowledge this.

The judge reading the verdict did not specify what offence the couple had been convicted of, but the prosecution had earlier downgraded an original charge of premeditated murder to one of "murder by negligence".

"We have just been wrongfully convicted and we feel as if we are being kidnapped by the Qatar judicial system," Matthew Huang said. "This verdict is wrong and appears to be nothing more than an effort to save face."

In Washington, State Department spokeswoman Marie Harf said on Thursday that the United States was "surprised and disappointed by the trial court's decision."

Harf told a regular news briefing that U.S. officials "have had some concerns throughout the trial by indications that not all of the evidence was weighed by the court and that some cultural misunderstandings may have led to an unfair trial."

"We have talked to the government (of Qatar) about this. We will continue to. And I do believe there is some sort of appeal process," Harf said.

Justin Brooks, a San Diego, California, attorney who speaks for the Huangs but did not represent them in court, characterized the verdict to Reuters as outrageous and a "tragedy."

"There's absolutely no evidence that Matthew and Grace are guilty of this horrible crime," said Brooks, director of the California Innocence Project, a California Western School of Law initiative aimed at releasing wrongfully convicted inmates.

Brooks said he had spoken to the couple prior to the verdict and that they had been confident they would be acquitted and would be able to return home soon.

"They were incredibly optimistic, the way innocent people are," he said.

Brooks said he was disappointed the Huangs were found guilty, but he was relieved they did not receive the death penalty, which prosecutors initially pursued.

David House, of an international crisis agency working with the family, said the defense lawyer was expected to get a full briefing on the verdict within days.

A website created to publicize the case (http://freemattandgrace.com) said Matthew, a Stanford-trained engineer, had moved to Qatar with his wife and their three young children in 2012 to help oversee a big infrastructure project related to the 2022 soccer World Cup.

Gloria died on January 15, 2013, and Qatari police charged the couple the next day. The website said the other children had been put in an orphanage.

Brooks said the surviving children, both boys, had since flown home with their grandmother and were living in the United States.

No detailed explanation of the charges has been published, but the website said Qatari officials had concluded "that the murder may have been done in order to harvest her organs or to conduct medical experiments on her".

The Huangs spent nearly a year in prison before being released on their own recognizance, but were not allowed to leave Qatar, the website said.

The judge said they had also been fined 15,000 riyals ($4,100) and would be expelled after completing their sentences.

(Reporting by Eman Kamal and Amena Bakr in Doha and Rania El Gamal in Dubai; additional reporting by Will Dunham in Washington and Laila Kearney in San Francisco; editing by Sami Aboudi and Chizu Nomiyama)

[Image: Matthew (L) and Grace Huang, a U.S. couple who were accused of murdering their adopted daughter Gloria, stand outside the entrance of the Court of First Instance after their trial in Doha, March 27, 2014. By Mohammed Dabbous for Reuters.]