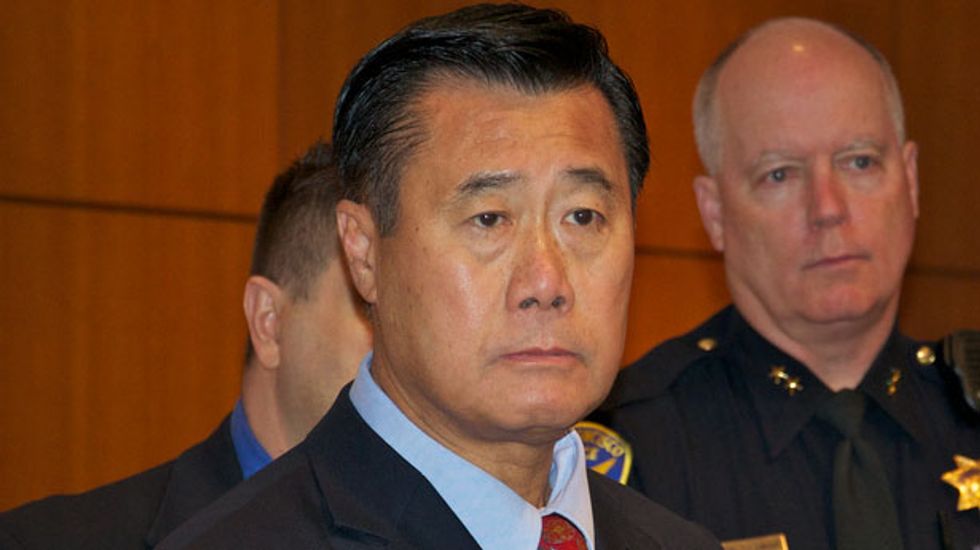 (Reuters) - The California state Senate suspended three Democratic lawmakers on Friday who have been the subject of criminal probes, including Leland Yee, who was arrested this week in an FBI sweep on corruption and gun trafficking charges.

The Senate voted 28-1 to suspend the three, all of whom have been charged with or convicted of criminal wrongdoing in separate cases, in a move that further erodes what had once been a Democratic two-thirds super-majority in the Senate.

"An affirmative suspension puts this house on formal record that we unequivocally distance ourselves and the senate from the unfathomable allegations contained in the Yee indictment as well as the other case," California Senate Democratic leader Darrell Steinberg said during the meeting.

The suspensions with pay, the first in state history from the senate, deal a major blow to Democrats in an election year as they seek to use large majorities in both houses of the state legislature and all statewide offices to push through key projects. A spokesman for Steinberg said the suspensions would take effect immediately.

Yee, a former San Francisco supervisor and one-time mayoral candidate, was criminally charged in federal court in San Francisco on Wednesday with two felony counts of conspiring to import and traffic in firearms, and six corruption counts.

A day later, he withdrew from a race for California Secretary of State where he had been considered a strong candidate to become California's chief elections officer. Yee has been released on $500,000 bond.

In the probe that led to Yee's arrest, federal authorities also arrested Raymond "Shrimp Boy" Chow, alleged to be the head of a Chinese organized crime syndicate, and two dozen other people, prosecutors said.

A criminal complaint from the U.S. Attorney's office for the Northern District of California says that Yee, in exchange for campaign contributions, did favors for an undercover FBI agent.

Yee offered to facilitate a meeting between an undercover agent and an arms dealer, and discussed the types of weapons the undercover agent might need, the complaint said. Yee has declined to comment on the case.

The senate also suspended fellow senators Ron Calderon, who was indicted last month on corruption charges, and Rod Wright, who has been found guilty of voter fraud. Both had already been on paid leaves of absence.

Calderon is charged in a federal grand jury indictment with taking some $100,000 in cash bribes, along with plane trips, golf outings and jobs for his children, in exchange for influencing legislation.

Prosecutors say he accepted bribes from hospital owner Michael Drobot to preserve a legislative loophole that allowed Drobot, who is cooperating with prosecutors, to defraud the state healthcare system out of hundreds of millions of dollars.

Calderon is also accused of taking money from undercover FBI agents posing as executives from an independent Hollywood movie studio in exchange for supporting an expansion of film tax credits in California.

Wright, who represents parts of Los Angeles and the suburb of Inglewood, was convicted in January of voter fraud and perjury after prosecutors said he did not reside in the district he represented.

He had previously been granted a paid leave of absence on the grounds that while he had been found guilty by a jury, the judge in the case had not yet formally endorsed the verdict.

Friday's suspension measure was opposed by Republican Senator Joel Anderson, who favored expelling the senators rather than suspending them with pay.

"What we're doing is incentivizing bad behavior with this resolution," Anderson said.