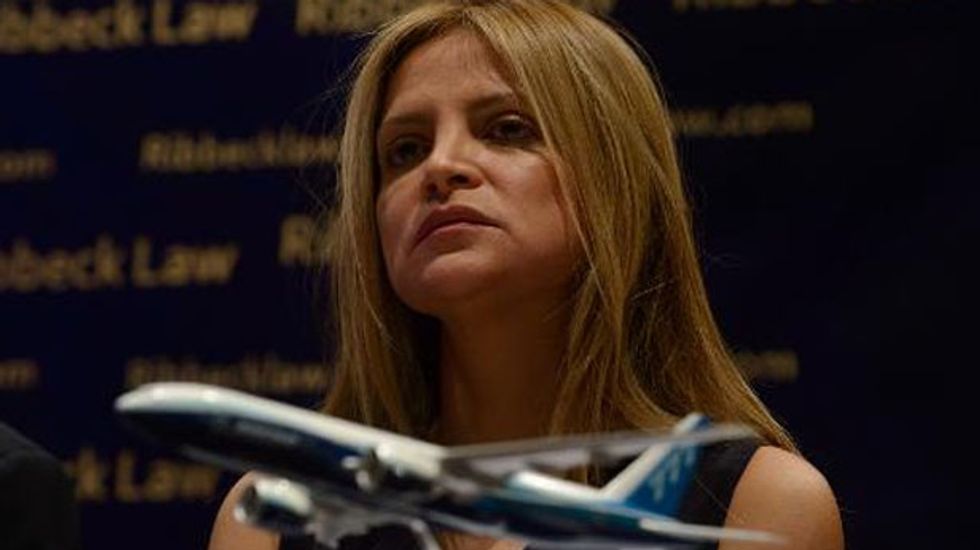 A US law firm said Wednesday it has initiated what it called the first civil legal proceedings over the crash of flight MH370 and said it planned to pursue lawsuits seeking "millions of dollars" for aggrieved families.

Chicago-based Ribbeck Law Chartered said it filed a court petition in the US state of Illinois targeting Malaysia Airlines and Boeing, blaming the two companies for the disaster.

"We are going to be filing the lawsuits for millions of dollars per each passenger based on prior cases that we have done involving crashes like this one," its head of aviation litigation, Monica Kelly, told reporters in Kuala Lumpur.

The development appeared to mark the start of what legal experts have warned could be a cascade of lawsuits by passengers' relatives livid over the unexplained disappearance of their loved ones.

The plane carried 239 passengers and crew.

Kelly said her firm was also talking to several other relatives in China and Malaysia about taking similar action.

Ribbeck in a statement said it had filed a "petition of discovery" in Illinois requesting a court to order defendants to provide potential evidence and other information.

In particular, the documents being sought pertain to possible design or mechanical defects or conduct by the airline that may have led to the disaster, it said.

"We believe that both defendants named are responsible for the disaster of Flight MH370," the statement said.

The legal action was filed on behalf of Januari Siregar, an Indonesian lawyer and father of Firman Chandra Siregar, 25, who was on the flight.

"I seek justice for my son and all of the people who lost their lives in the crash," Januari Siregar was quoted in the statement as saying.

"All of the families of the victims want to know the truth and causes of this tragedy, same mistakes must be avoided in the future and those responsible must be brought to court."

Boeing and Malaysia Airlines have 30 days to reply, Kelly told reporters, adding that a lawsuit could take years to settle.

Ground contact with the Beijing-bound flight was lost somewhere over the Gulf of Thailand, shortly after it took off from Kuala Lumpur on March 8.

Malaysia believes it was deliberately diverted. It said Monday that satellite data indicates the plane crashed into the southern Indian Ocean, thousands of miles from its original path.

But no wreckage has been found there despite several days of searching by a fleet of ships and planes, and no other evidence has publicly emerged to indicate what caused the plane to divert.

Floyd Wisner, another US-based aviation crash attorney, said Malaysia Airlines' liability was "almost certain, no matter what the cause of the crash ultimately is determined to be".

"The fact that the wreckage has not yet been found does not have any real legal impact upon the families' claims against Malaysia Airlines," he told AFP.

However, other lawyers said lawsuits could be bogged down by the lack of evidence.

Many of the next-of-kin of MH370 passengers, particularly Chinese relatives, have been frustrated with the lack of information and angrily accuse the flag carrier and the Malaysian government of incompetence and withholding evidence.

Two-thirds of the 227 passengers were Chinese.

Kelly said her firm believed equipment failure caused a fire or sudden loss of pressure that rendered the pilots unconscious and "a ghost plane" flew for several hours until it ran out of fuel.

Malaysia Airlines said in a statement its lawyers had been advised of the court action, but declined further comment.

Boeing did not immediately return a request for comment.

The national flag carrier has already paid $5,000 to next-of-kin, but they are entitled to up to about $176,000 under an international convention.