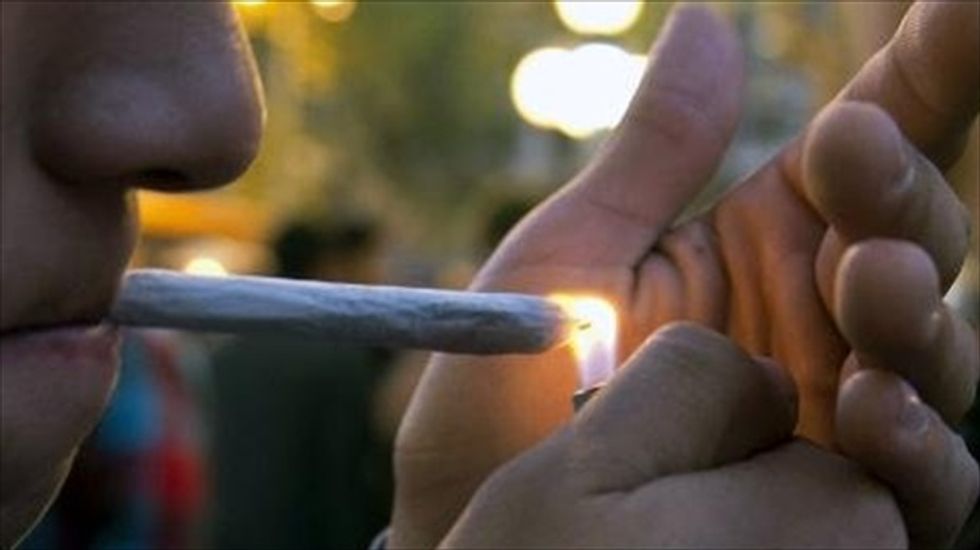 Colorado has launched a "Drive High, Get a DUI" ad campaign to deter motorists from taking the wheel after consuming marijuana in the US state, which legalized recreational pot in January.

The $500,000 campaign uses humor and is aimed particularly at young men aged 21 to 34, with a series of TV ads warning about driving after using weed and the risk of receiving a driving-under-the-influence (DUI) penalty.

The western U.S. state became the first in the country to legalize pot for recreational purposes on January 1. Washington state is due to follow suit this year.

In one of Colorado's ads, a young man is seen putting up a flat-screen TV on a wall, then delightedly tucking into munchies -- as the television crashes to the ground.

"Installing your TV while high is now legal," reads the text in the ad by Colorado's Department of Transportation. "Driving to get a new one isn't."

Another shows a man repeatedly trying to ignite a gas-fueled barbecue, before realizing there's no gas bottle, as his girlfriend looks on with embarrassment.

A third shows a young man bouncing a basketball, endlessly preparing a shot, as his friends become increasingly impatient.

All three ads end with the slogan "Drive High, Get a DUI."

"Before beginning the campaign, we did extensive research about medical and recreational marijuana users’ perceptions of marijuana’s effects on driving,” said spokeswoman Amy Ford.

“We heard repeatedly that people thought marijuana didn’t impact their driving ability, and some believed it actually made them a better driver," she added.

The campaign is backed by the Marijuana Industry Group, a trade organization. "We want this new industry to thrive," said its head Michael Elliott.

"The best way to do that is to ensure marijuana users and the industry understands the laws and regulations, and consumes marijuana responsibly," he added.

In January more than half the 60 DUI citations issued by police involved motorists who had smoked cannabis, according to Department of Transportation figures.

Marijuana sales in Colorado brought in $3.5 million in tax revenues and fees in the first month retail pot outlets were allowed, officials said earlier this week.

After Colorado, the Pacific Northwest state of Washington is set to follow suit later this year -- even though, under federal law, marijuana remains as illegal as heroin, ecstasy and LSD.