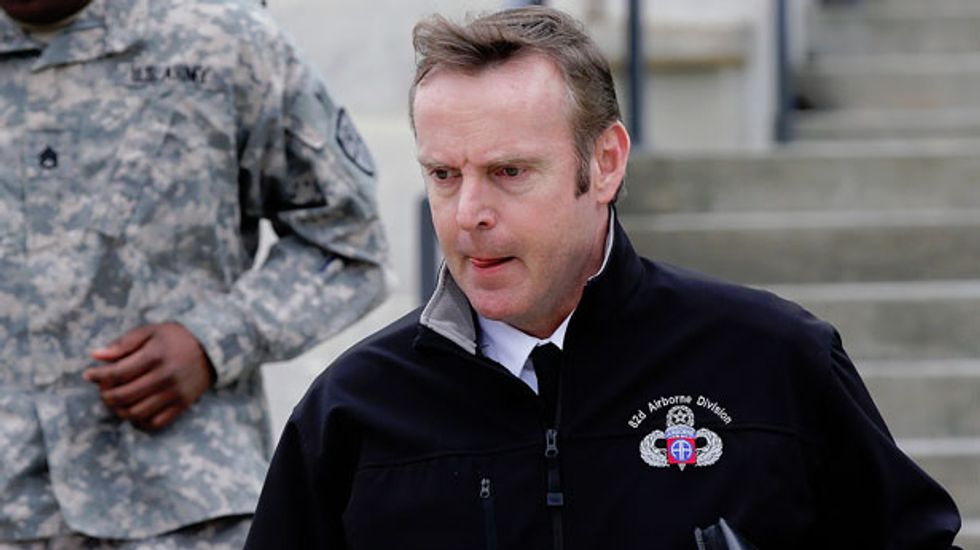 FORT BRAGG, North Carolina (Reuters) - A U.S. Army general will plead guilty on Thursday to military crimes of having an adulterous affair, seeking nude photos of junior officers and possessing pornography while deployed in Afghanistan, his lawyers said.

Brigadier General Jeffrey Sinclair, the defendant in a rare court-martial against a top U.S. military officer, will continue to fight charges that he sexually assaulted a female captain during their three-year relationship.

Sinclair's plans were announced by his defense team late Wednesday. The news was likely to shake up the court proceedings at Fort Bragg, North Carolina, which were scheduled to begin on Thursday with opening statements from lawyers.

Prosecutors say he used his superior rank to prevent the woman from ending their sexual relationship and threatened to kill her or her family if she exposed the affair.

Sinclair is accused of indecent conduct by having sex with the captain in public places, including in a car in Germany, on a hotel balcony in Arizona and in an office with the door open in Afghanistan, the government said.

The general denies committing any sex crimes and could be sent to prison for life if convicted of the most serious charge, forcible sodomy.

Should the military trial judge approve Sinclair's guilty pleas on some of the lesser offenses, a jury of five two-star generals will decide the one-star general's guilt on the remaining charges.

Those allegations include misuse of a government credit card for personal purposes and referring to female staff officers with derogatory language.

Sinclair's defense attorneys say military leaders trying to look tough on sex crimes have pursued the case despite weak evidence and allegations made by a jilted ex-lover with questionable credibility.

They argue text messages between the two soldiers reveal mutual affection and a romance that unraveled due to the woman's jealousy.

Sinclair's guilty pleas leave the prosecution with "a crime that never happened, a witness who committed perjury and a pile of text messages and journal entries that disprove their claim," lead defense attorney Richard Scheff said.

"General Sinclair has consistently admitted his shortcomings and taken responsibility for them," the attorney added.

A military spokesman said prosecutors would reserve their comments for the courtroom.

The trial takes place as Pentagon officials are under orders from President Barack Obama to review how the military handles sex crimes after a spike in incidents of unwanted sexual contact. Congress is debating a proposal to transfer the power to decide whether to try sexual assault cases from military commanders to an independent military prosecutor.

Sinclair was stripped of his command in southern Afghanistan in May 2012 as a result of the criminal allegations and remains on active duty at Fort Bragg.