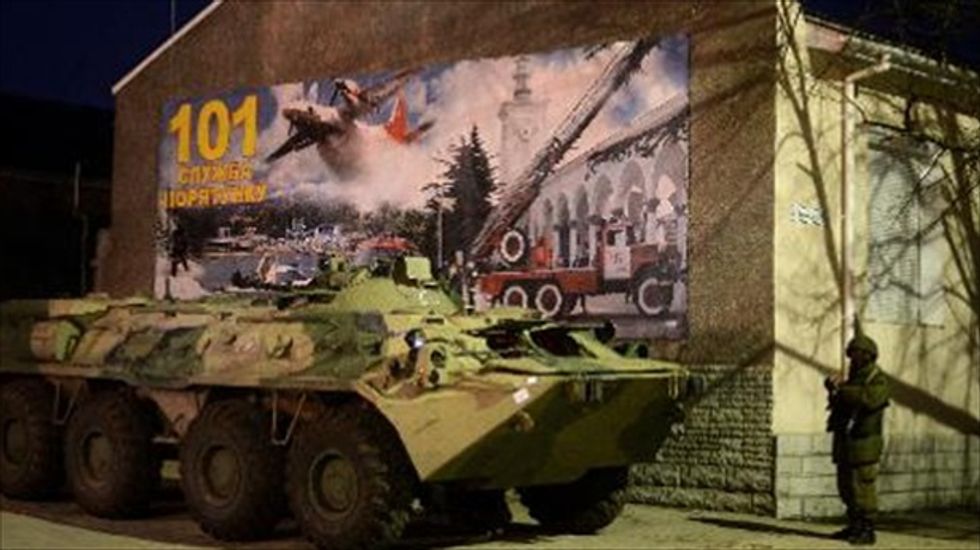 Armed members of the Russian forces wait outside the Ukrainian firefighters brigade headquarters in Simferopol on March 18, 2014 [AFP]

The officer's absence drew chuckles from the roughly 100 firefighters assembled in front of him and sweating away in their spanking new Russian uniforms on the shabby parade grounds.

The role of Sasha Lutsevich was important -- he was to hoist Russia's tricolour flag over the premises to the sound of the Russian anthem.

Not only was he missing, but the anthem gave way to disco music as department employees prepared for the arrival of Russian Emergencies Minister Vladimir Puchkov.

Fortunately for all concerned, it was only the dress rehearsal for a ceremony to be held a few hours later.

"What did I tell you? Only one verse, the refrain, and then cut!" Tkachenko barked at the sound manager.

"Overhead we hear the sound of the Mi-8 helicopter which has begun its duties in Crimea today," Tkachenko said, running through his lines for the ceremony.

A lawnmower wailed in the distance at the grounds, located in the outskirts of Simferopol, Crimea's main city.

"After it's over and everyone leaves, we continue with long applause," he instructed his men, who abandoned their blue Ukrainian uniforms this week for the new emerald outfits worn by the Russian emergency services.

But Russia had apparently only sent enough for the men standing in the parade ceremony, and a rescue worker buying bread in a shop nearby was still clad in the ragged jacket emblazoned with "MVS Ukraini" on the back.

"They ran out of uniforms," he told AFP. "But I'll get one sooner or later."

The emergencies ministry is the first in Crimea to completely switch to Moscow rule as Russian forces complete the takeover of the peninsula.

Ahead of Puchkov's visit, employees taped Russian-language paper signs on their offices and hung a giant poster on the building.

Outside, a truck mounted with a satellite dish ensured constant communications between the building and Moscow.

On the other side of the building, a fading Ukrainian-language mural saying "Headquarters of Ukraine's emergencies ministry in Crimea" could still be seen.

After two hours in the hot sun, the Russian minister, a potbellied 55-year-old in a tracksuit top and crumpled jeans, finally arrived to a flawless welcome.

"It is a very happy day, a very emotional day," said Puchkov.

"A whole new division has joined the Russian team," he announced before awarding several officers and hugging some as they declared, one by one: "I serve the Russian Federation!"

"Those of you who are not on duty tonight -- I say that you can get a good drink to celebrate," he said as the Russian flag flapped in the wind overhead.

"Finally!" said Tkachenko, clearly excited to get six new fire engines from Russia, and a helicopter that will help to put out mountain bushfires.

"New equipment!" he said, marvelling at one of the trucks with an extended ladder. "We have dreamt of such a ladder for 12 years -- dreams come true!"

"We'll get twice as many men too!" he said, listing the gifts from Russia like a child on Christmas morning.

"Those who wanted to move and not work in Crimea could move, but there were only 12 people like that in the entire Crimea."