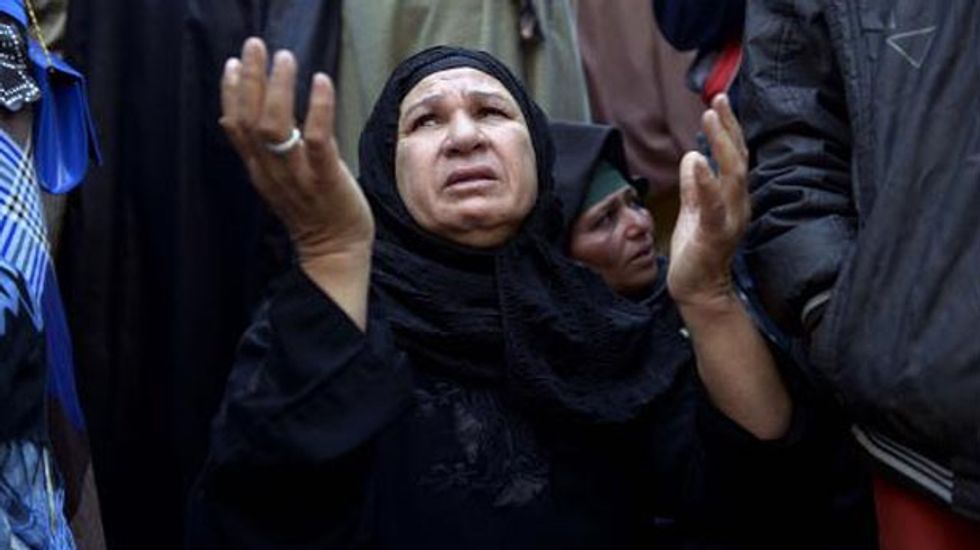 An Egyptian court's sentencing of 529 people to death for rioting has fixed the spotlight on a massive legal war on the Islamist opposition, with thousands in prison and hundreds more convicted in mass trials.

Many of an estimated 15,000 suspects in prison are languishing without charges in overcrowded and filthy cells, rights lawyers say.

The ones who do manage to reach the courts, mostly accused of violence in the months after the army overthrew Islamist president Mohamed Morsi in July, are usually convicted in quick trials, setting off a confusing and lengthy appeals process.

The 529 defendants sentenced Monday were accused of murder and attempted murder of several policemen.

The court passed sentence after only two hearings, without even ascertaining whether the defendants were present at the start of the trial, lawyers said.

The judgement will likely be overturned on appeal.

Prior to Monday, at least 822 people had been sentenced since December, all in groups of 10 or more. Their prison terms ranged from six months to life, with one sentenced to death.

Dozens have been acquitted.

The trials result "in outrageous sentences that represent serious miscarriages of justice," she said in a statement.

The government says the judiciary is independent, and that the court sentenced the men to death "after careful study of the case."

Police say they make arrests only with the prosecution's permission, and that they apprehend only suspects involved in violent or unlawful protests and attacks on security forces.

At least 1,400 people have been killed in street clashes with security forces since Morsi's overthrow, and more than 200 policemen have died in a burgeoning militant insurgency.

Suspected Islamists have also attacked Christian properties across the country in response to the police's deadly crackdown, singling out the minority for supporting the mass movement that led to Morsi's ouster.

The scope of the arrests, and the subsequent trials of those charged, including a number of journalists, has sent a chill through the country's small but vocal opposition that extends beyond Islamists.

Successive Egyptian presidents had cracked down on the Islamists. However, after Hosni Mubarak's overthrow in 2011 the Brotherhood flourished until the ouster of Morsi, freely elected in 2012.

The scale and swiftness of mass trials under the military-installed regime are unprecedented, says leading human rights lawyer Ahmed Seif.

"This is new, the large use of trials over such a geographical spread," said Seif.

His son, leftwing activist Alaa Abdel Fattah, is also on trial for allegedly participating in a violent and illegal protest. A court freed him on bail this week after a three month pre-trial detention.

"The state is trying to use 'soft' methods to control society without using exceptional measures," Seif said of the trials.

This is highlighted by an incident on January 25. That day, as security forces clashed with Islamist protesters across the country, police broke up a small protest against the military-installed government by secular leaning activists in an affluent Cairo suburb.

Even though there also opposed the Islamists, they were initially charged with belonging to the now blacklisted Brotherhood.

The charges were subsequently changed to having engaged in unlawful assembly. After a quick trial, a misdemeanour court sentenced 20 of them to prison terms or gave them hefty fines.