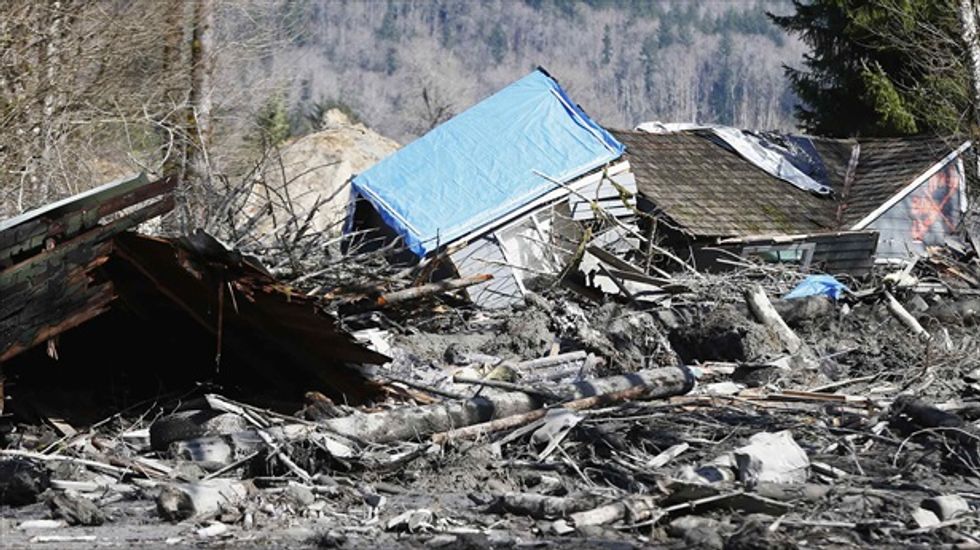 ARLINGTON, Washington (Reuters) - The confirmed death toll from a devastating weekend mudslide in Washington state climbed to 14 people on Monday as six more bodies were found, while scores of people remained listed as missing two days after the tragedy, authorities said.

The Snohomish County sheriff's office reported the higher casualty count via Twitter hours after emergency management officials expressed doubt anyone else would be plucked alive from the muck that engulfed dozens of homes when a rain-soaked hillside near Oso, Washington, collapsed on Saturday morning.

Meanwhile, concern lingered about flooding from water backing up behind a crude dam of mud and rubble dumped into a river by the slide in an area along State Route 530 about 55 miles northeast of Seattle.

"The situation is very grim," said Travis Hots, Snohomish County District 21 Fire Chief. "We're still holding out hope that we're going to be able to find people that may still be alive. But keep in mind we haven't found anybody alive on this pile since Saturday in the initial stages of our operation."

Several dozen homes in all were believed to have sustained some damage from the slide, John Pennington, director of the Snohomish County Department of Emergency Management, told reporters at a command post in the nearby town of Arlington.

More than 100 properties in all were hit by the cascading mud, 49 of which had a house, cabin or mobile home on them. At least 25 of those homes were believed to have been occupied year round, and 10 others were part-time or vacation homes, Pennington said.

The search for victims resumed under partly cloudy skies on Monday after treacherous quicksand-like conditions forced rescue workers to suspend their efforts at dusk on Sunday. Some workers, mired in mud up to their armpits, had to be dragged to safety.

A spokesman for the Snohomish County Sheriff's Office said eight bodies had been found by Sunday evening in the square-mile (2.6 square km) disaster zone of tangled debris, rocks, trees and mud. The late-afternoon Twitter bulletin on Monday said the remains of six more victims had been found. Another eight people were injured in the landslide.

A jump in the number of people listed as unaccounted for in the chaos after the disaster heightened fears that the casualty toll could climb even higher.

On Sunday night, officials put the number of missing at 18 or more, but on Monday morning Pennington said various agencies had collected reports - some specific and others vague - of 108 people who remained unaccounted for after the disaster.

"The number is, I think no question, going to decline dramatically. But it is a number that we want to just go ahead and disclose and say, 'That's what we're working with,'" Pennington said.

Watch a report on the aftermath of the mudslide, as aired on KIRO-TV on Monday, below.