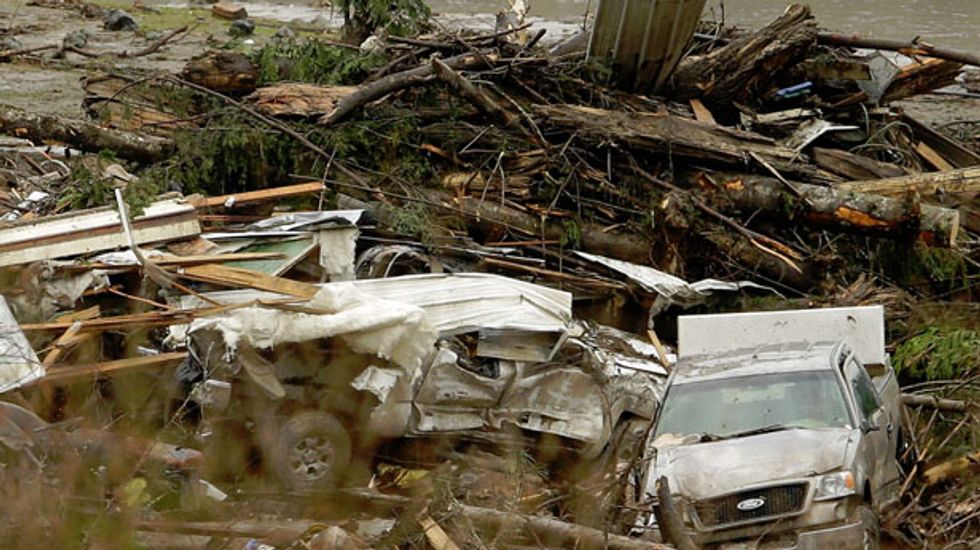 ARLINGTON, Wash./DARRINGTON, Washington (Reuters) - Rescue officials said the death toll from a catastrophic mudslide in Washington state is soon expected to climb far higher, as some residents voiced anger that they were prevented from helping in the initial disaster response six days ago.

At least 26 people were known to have perished when a rain-soaked hillside collapsed without warning on Saturday, unleashing a deluge of mud that flattened dozens of homes in a river valley near the rural town of Oso, in Snohomish County, some 55 miles northeast of Seattle.

Authorities feared that some of the 90 people still missing might never be found in the square-mile (2.6 sq km) heap of mud-caked debris and muck. Officials were expected to revise casualty tolls during a news conference at 9 a.m. PDT (12.00 p.m. ET) on Friday.

Although the remains of 26 people killed by the landslide were known to have been found, local authorities for days have been counting only the first 16 victims recovered and examined by coroners for inclusion in the official death toll. Late Thursday night, Snohomish County officials said an infant whose body was recovered earlier in the day had also now been sent to the medical examiner's office.

"In the next 24 to 48 hours, as the medical examiner's office catches up with the difficult work that they have to do, you're going to see these numbers increase substantially," local fire district Chief Travis Hots said on Thursday.

An estimated 180 people lived in the path of the landslide.

"This is going to get harder and harder," said Dan Rankin, mayor of nearby Darrington, as he choked back tears at a town hall meeting attended by hundreds of people on Thursday evening. "We need each other more and more."

Authorities have acknowledged there is little chance of finding any more survivors in the massive mound of mud and rubble left by the slide.

However, Hots said about 200 people continued to comb through the treacherous disaster site without respite, and were continuing to treat the search for victims as a rescue operation for now.

Despite the slow trickle of information on the tally of dead and missing, most people in town seemed comfortable that officials were dealing with them forthrightly.

"They're keeping us informed," said Bernie Tamez, 39, a machinist who took the week off to volunteer in Darrington where he lives.

Turned away from helping at the pile, he has instead helped out in the community kitchen that has been feeding a few hundred people each night before the town hall meeting.

All of those discovered alive in the mud were rescued by helicopter within the first few hours after the landslide, and rescuers have not found further signs of life, officials said.

Authorities were investigating the cause of the mudslide. The Washington State Department of Natural Resources said it would review recent forestry activities in the area to determine whether they might have been a factor. No earthquake had occurred in the region, according to the U.S. Geological Survey.

Many residents voiced anger that local officials refused to allow volunteers to join the search for survivors immediately after the slide, when chances for finding any were greatest.

While some used their intimate knowledge of the area to sneak into the disaster zone to help, others said they returned home feeling frustrated and helpless.

Officials warned that conditions were too dangerous to allow non-professional volunteers into the disaster zone even though they finally agreed on Tuesday to start allowing volunteers to join the official rescue teams.

Local politicians told the Seattle Times newspaper that county authorities had wasted time by failing to recognize quickly the scope of the disaster and could have sought more experienced help rather than conducting efforts alone.

While county officials did not initially grasp the magnitude of the devastation, there was no room for more personnel because of quicksand-like conditions and fears of further slides, Military Department spokeswoman Karina Shagren said.

"There wasn't a resources issue, there was a safety issue."

Residents who had escaped the slide marveled at their luck.

"We were driving on that exact stretch two weeks ago. We were right there," 45-year-old Larry Dwyer said as he watched his three sons wave signs ushering motorists toward a food drive at an Arlington market on a rainy Thursday evening. "That's why we're out here right now. It's a karma thing. When it's not you, you give."