Donald Trump will not run for N.Y. governor's seat: 'a race I would have won'

Businessman and reality TV-show host Donald Trump announced via Twitter on Friday that he will not be a candidate in New York's gubernatorial race this year despite stating that it was "a race I would have won."

The publicity-seeking Trump, who has also considered a Presidential run in 2012 and has spoken of running for president again in 2016, tweeted: "While I won't be running for Governor of New York State, a race I would have won, I have much bigger plans in mind- stay tuned, will happen!"

Despite his assertion that it would have been a winnable race, a recent Marist poll showed that the businessman would lose to incumbent Gov. Andrew Cuomo (D),  70 percent to 26 percent; a 44 point gap.

Other candidates, Westchester County executive Rob Astorino and political activist Carl Palondino, polled better than Trump, however both would also lose badly to Cuomo -Astorino by 40 points, Palladino by 43 - if the election were held today.

Trump has yet to tweet his plans for the 2016 Presidential election, but did leave the door open with his promise of  "bigger plans." 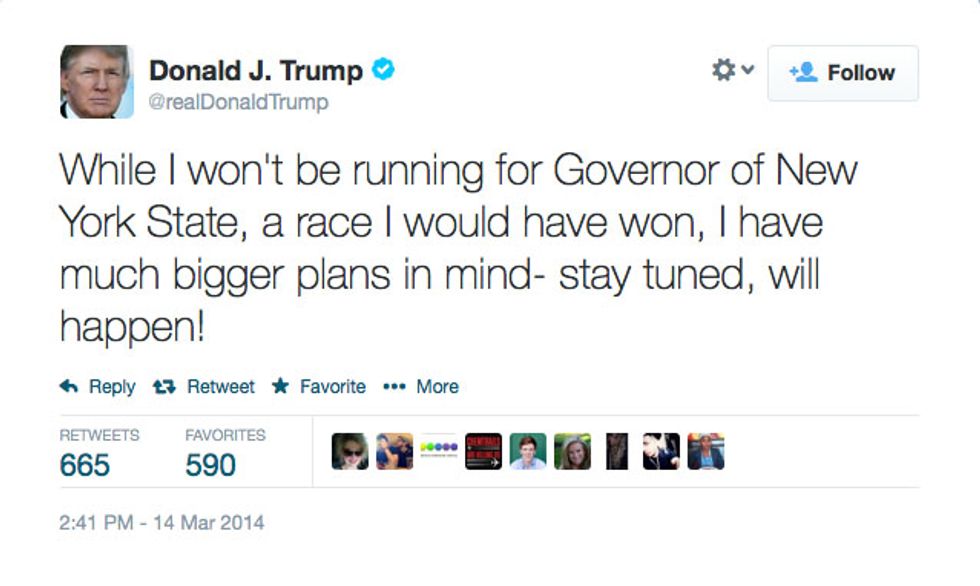