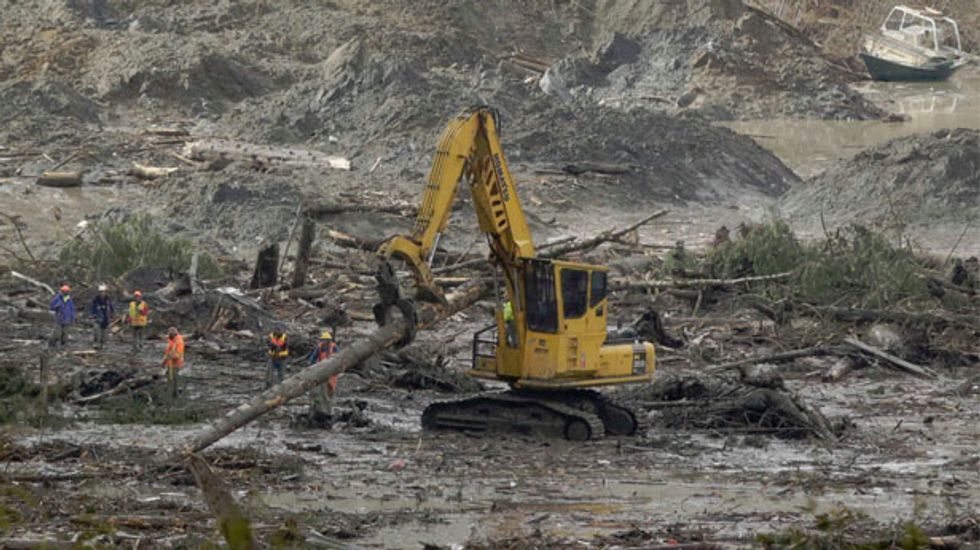 OSO, Washington (Reuters) - Recovery teams already laboring through thick mud and heavy downpours at the site of last week's landslide in Washington state are facing yet another challenge - an unseen and potentially more dangerous stew of toxic contaminants.

Sewage, propane, household solvents and other chemicals all lie beneath the surface of the gray mud and rubble that covered a square mile of a small, rural community and left dozens dead and missing northeast of Seattle.

The official death toll stood at 21 on Monday, with 30 people still listed as unaccounted for nine days after a rain-soaked hillside collapsed on the morning of March 22 above the north fork of the Stillaguamish River.

The torrent of mud released by the slide roared over both stream banks and across state Highway 530, engulfing dozens of homes on the outskirts of the town of Oso in the foothills of the Cascade Mountains.

Jason Biermann, program manager for the Snohomish County Emergency Management Department, said late on Sunday that the official loss of life so far included 15 victims whose remains have been identified by medical examiners and six more still awaiting positive identification.

He said four additional sets of remains were found on Sunday that for reasons not explained to reporters were being left out of the official tally of dead.

NO SIGNS OF LIFE

Authorities have offered conflicting casualty figures, and the process of accounting for the number of dead has likely been complicated by the condition of some bodies that rescue workers have said are not always found intact.

Based on the four latest sets of remains reported found, and previous statements by county officials, the overall unofficial death toll could stand as high as 32.

No one has been pulled out alive, and no signs of life have been detected, since the day the landslide hit, when at least eight people were injured but survived.

Officials have conceded it may be impossible to account for everyone lost in the disaster, and that some victims might end up being permanently entombed under the mound of muck and debris.

Scores of recovery workers, including National Guard troops just back from Afghanistan, continued to pick through the swampy, rubble-strewn mud on Sunday, as overcast but dry weather provided a welcome respite from heavy rains of recent days.

Weather forecasts for the week ahead showed a continued drying trend, "which will help crews and reduce the risk of flooding and additional slides," the county said in a statement.

Some parts of the slide area, buried beneath as much as 80 feet of mud and twisted tree trunks, were still too dangerous to enter, Burke told the visiting reporters.

Like most workers at the site, Burke's boots were sealed to his trousers with duct tape, a precaution to keep toxic sludge out of his clothing. National Guard troops also set up a decontamination station where workers scrubbed themselves with soap and hot water before leaving the site.

"This is going to be a hazardous materials site for many years while we try to get this cleaned up," Burke said.

Local churches offered prayers on Sunday for the dead and missing, and words of solace for grieving families.

Governor Jay Inslee, who toured the disaster zone by helicopter on Sunday, said relatives had not given up all hope of finding a "miracle" survivor, and neither had authorities.

"We're looking for that miracle right now," the governor said during a stop at an airfield in the neighboring town of Arlington. "If we don't find that miracle, they're also looking for the knowledge of the fate of their loved ones."

'Kind of complicated': Growing grapes in the world's driest desert

In the middle of Chile's Atacama desert, the driest in the world, Hector Espindola has an unexpected job: he runs a vineyard.

Nearly 2,500 meters (8,000 feet) above sea level, his small Bosque Viejo farm produces muscat grapes -- and another of a unique "criollo," or local, variety -- in the shadow of quince, pear and fig trees irrigated by a stream fed by melting Andean snow.

What's happening in the Wimbledon controversy?

The French Open is being overshadowed by the controversy sparked by the decision of Wimbledon to ban Russian and Belarusian players from next month's grass court Grand Slam.

AFP Sport looks at the main points in a crisis which could prompt some players to skip the event after the ATP and WTA tours stripped Wimbledon of ranking points.