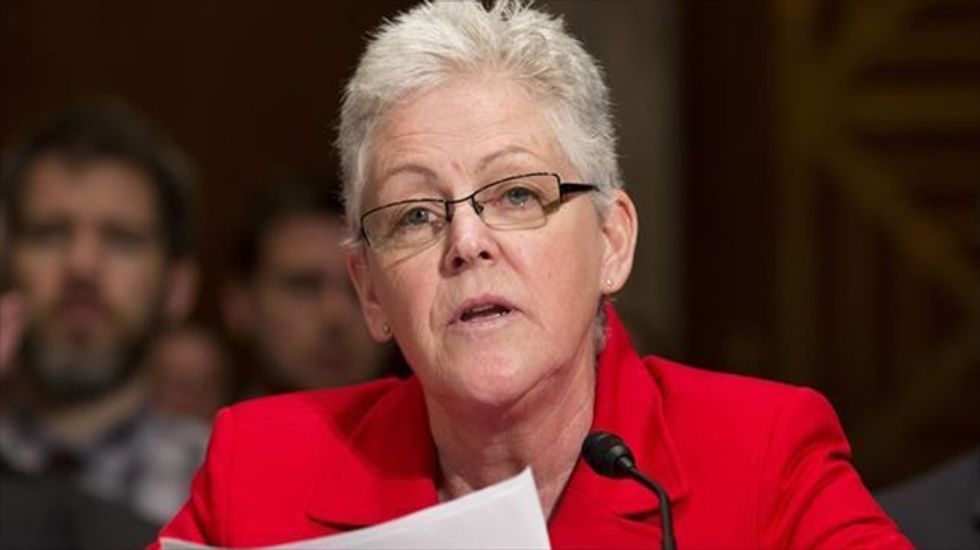 McCarthy's speech in Houston to IHS CERAWeek, the largest meeting of energy executives in the world, was the first by an EPA administrator since the conference began 33 years ago.

Her presence was seen as an acknowledgement by the Obama administration that the onshore U.S. energy boom of the past five years, which has transformed businesses from chemicals to railroads, has been one of the economy's bright spots.

"We don't have to choose between a healthy environment and a healthy economy," McCarthy, who has run the EPA for nearly a year, said about new rules she said would be proposed by this summer.

"We know conventional fuels like coal and natural gas are going to continue to play a critical role in a diverse U.S. energy mix."

The Houston visit came about a week after McCarthy toured North Dakota, trying to convince the state's coal, oil and ethanol producers that her agency was not trying to burden their industries with onerous regulations.

The fuels, McCarthy said in North Dakota, should be part of an "all-of-the-above strategy" that runs from solar to coal. She reiterated that theme to CERAWeek's more than 2,000 attendees.

It was a marked shift from McCarthy's predecessor, Lisa Jackson, viewed warily by energy companies that perceived her as indifferent to how regulations affected their operations.

"Administrator McCarthy understands the EPA has to protect the environment while doing all it can to protect jobs," said Larry Nettles, an environmental lawyer at Vinson & Elkins LLP, a prominent law firm in the energy sector.

Energy and environmental issues are "two sides of the same coin" that can be accomplished in tandem, McCarthy said.

For instance, she credited new fuel efficiency standards for automobiles with encouraging automakers to build cars that get more miles per gallon, boosting appeal to consumers.

Energy executives said they were encouraged by the EPA's new tone but are eager to see it reflected in concrete regulation.

Utilities are awaiting final rules on new and existing power plants, and McCarthy said she would unveil proposed new regulations in June. Some say rules that are too restrictive could end coal-powered electricity generation in the United States.

"In order not to impact the economy or the reliability of the grid, we need to ensure this is done in a responsible way," Nick Akins, chief executive officer of American Electric Power Company Inc, said at CERAWeek.

McCarthy said she will work to recognize each state's unique energy and regulatory needs. Texas, for instance, has the most oil refineries, and may have different concerns than Maine, which produces a large amount of pellet fuel for wood stoves.

McCarthy said her first priority is stopping climate change, which she said would cost U.S. businesses more in total than the expense of complying with regulations.

"The real, scary cost we need to worry about is the cost of climate inaction," she said. McCarthy said right now she is focused on power plant regulation and is unsure if she will have time in her term to focus on refiner regulation.

"This is where my focus is and will be," McCarthy said.

Lynn Good, CEO of Duke Energy Corp, the largest American utility, said she is "encouraged" by McCarthy's new approach but has already decided building new coal plants are not worth the regulatory risk.

"I don't see new coal in the mix for Duke," Lynn said.

McCarthy said carbon capture and storage (CCS) technology, in which a coal plant would capture carbon from its smoke stack, inject it underground and either store it or use it in an oil recovery process, is one of the coal industry's best options to reduce emissions. Power producers have said CCS is commercially tenuous and too expensive to be viable.

Opponents of EPA regulations have often been wrong when they cry "the sky is falling" when new rules are enacted, McCarthy said, trying to ward off any fresh attacks following her speech.

"We've heard this tired argument again and again before," she said. "And every single time, it's fallen flat on its face."

[Image: Gina McCarthy testifies before a Senate Environment and Public Works Committee hearing on her nomination to be administrator of the Environmental Protection Agency on Capitol Hill in Washington April 11, 2013. By Joshua Roberts for Reuters]