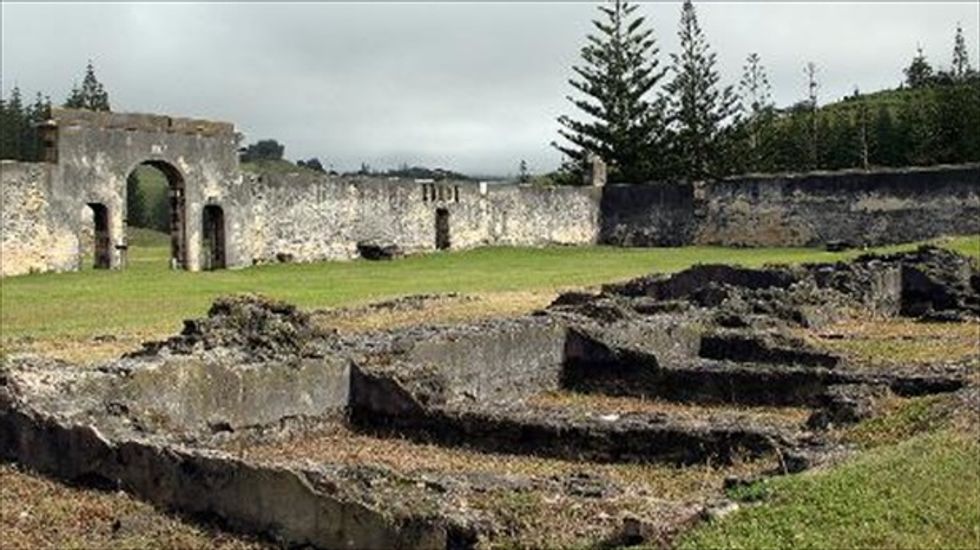 Thousands of British convicts were deported to Australia to serve out sentences in often brutal penal colonies, such as this one on Norfolk Island [AFP]

The only first-hand account of the most famous escape from Britain's fledging Australian penal colony was published in full on Friday for the first time, exactly 223 years on.

The tale of William and Mary Bryant's escape from the first penal settlement in New South Wales on March 28, 1791, their extraordinary voyage and their ultimate recapture is well-known.

Along with their two children, fellow convict James Martin and six others, they stole the governor's six-oared boat and travelled round Australia's east and north coasts, encountering Aboriginal peoples and surviving fierce storms.

However, the popular story is chiefly based only on a heavily-edited 1930s version of Martin's account and second-hand tales containing numerous exaggerations and inventions.

The hand-written account was found in the vast archive of Jeremy Bentham, a philosopher and prison reform campaigner of the time, part of which is held by UCL.

Besides the escape tale, it is the only known narrative from the first convicts deported to Australia, who arrived in 1788.

"This is the first time that the original document has been made widely available," said UCL researcher Tim Causer.

"This document should have a wider audience than it otherwise has had because it is the only first-hand account written by First Fleet convicts and it's such a well known story -- probably the most famous escape story from colonial Australia."

The escapees all survived the two-month journey of more than 5,000 kilometres (in an open cutter boat, partly through uncharted areas -- a remarkable feat of endurance and seamanship.

When they landed at Kupang on West Timor on June 5, they posed as shipwreck survivors and were well-treated by their Dutch colonial hosts.

However, they were eventually identified as absconders and were sent back to England. Four convicts and the two children died en route. The survivors -- Mary Bryant, Martin and three others -- were eventually released in 1793 after serving out their sentences in London's Newgate Prison.

The story was made into a 2005 television film, "The Incredible Journey of Mary Bryant", starring Sam Neill and Romola Garai. It was said at the time to be Australia's most expensive mini-series ever made.

Causer said existing accounts of the escape by historians and writers "contain a number of inaccuracies, exaggerations and inventions, which are not borne out by a reading of the manuscript" and are probably down to the scarcity of first-hand material.

He added: "It is often told with a focus upon the figure of Mary Bryant.

"I hope that by publishing this narrative online and fleshing out the perspective of the other convicts, it will help to create a more rounded story."

The narrative ends with their incarceration at Newgate, and Causer said the account -- which begins with the words "I James Martin" but is written by three different hands -- was most probably taken down by prison staff.

"It reads as if it's been dictated," he told AFP, but nonetheless "it reads true".

"You can compare the documents to other accounts of people who were in the vicinity," he explained.

"A man on the ship home spoke to them and the account he gives matches with the account of Martin. It matches up with newspaper accounts and other primary sources."

The Bentham researcher said there was also a mystery as to how the philosopher got the testimony, but the man regarded as the founder of modern utilitarianism had been gathering "ammunition" about the New South Wales colony.

Bentham tried to portray it as "a sink of immorality, a place where convicts would never be reformed and would be a constant drain on the country", Causer said.

UCL is digitizing its portion of Bentham's archive, conservatively estimated at 60,000 manuscripts and 30 million words.