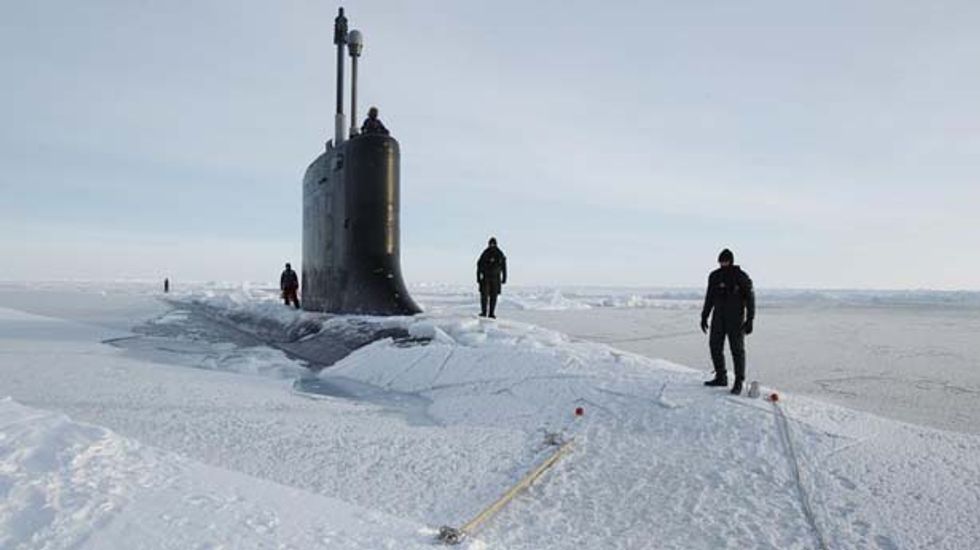 U.S. Navy safety swimmers stand on the deck of the Virginia class submarine USS New Hampshire after it surfaced through thin ice during exercises underneath ice in the Arctic Ocean north of Prudhoe Bay, Alaska March 19, 2011. REUTERS/Lucas Jackson

WASHINGTON (Reuters) - The U.S. Navy is mapping out how to expand its presence in the Arctic beginning about 2020, given signs that the region's once permanent ice cover is melting faster than expected, which is likely to trigger more traffic, fishing and resource mining.

"The Arctic is all about operating forward and being ready. We don't think we're going to have to do war-fighting up there, but we have to be ready," said Rear Admiral Jonathan White, the Navy's top oceanographer and navigator, and director of the Navy's climate change task force.

"We don't want to have a demand for the Navy to operate up there, and have to say, 'Sorry, we can't go,'" he said.

The Navy this week released an "aggressive" update to its 2009 Arctic plan after a detailed analysis of data from a variety of sources showed that seasonal ice is disappearing faster than had been expected even three years ago. The document said the Bering Strait was expected to see open water conditions about 160 days a year by 2020, with the deep ocean routes of the Transpolar transit route forecast to be open for up to 45 days annually by 2025.

The document includes dozens of specific tasks and deadlines for Navy offices, including calling for better research on rising sea levels and the ability to predict sea ice thickness, assessment of satellite communications and surveillance needs, and evaluation of existing ports, airfields and hangars. It also puts a big focus on cooperation with other Arctic nations and with the U.S. Coast Guard, which is grappling with the need to build a new $1 billion ice-breaking ship.

The Navy is conducting a submarine exercise in the Arctic next month, and plans to participate in a joint training exercise with the Norwegian and Russian military this summer.

White said the Navy's new projection was aimed at answering "the billion dollar question" of how much it would cost to prepare for an increased naval presence in the Arctic, and trying to determine what investments were needed when.

"We're trying to use this road map to really be able to answer that question," White said, noting that early smaller-scale investments could help avert bigger bills in the future.

He said efforts were under way now in the Navy to identify specific requirements for weather-hardened ships and other equipment, land-based infrastructure, and better bandwidth for satellite and shore-based communications capabilities.

The Office of Naval Research and the Pentagon's Defense Advanced Research Projects Agency are already funding numerous Arctic-focused projects with industry, White said, predicting increased public-private projects in recent years. He said he realized U.S. military budgets are under pressure, but hoped the plan would help undergird Arctic-related budget requests in coming years by showing lawmakers that the Navy had carefully studied and evaluated its options.

"As far as I'm concerned, the Navy and Coast Guard's area of responsibility is growing," White said. "We're growing a new ocean, so our budget should be growing in line with that."

The Navy's plan does not alter any current funding, but calls for identification of future ships and other weapons by the third quarter of fiscal 2014, which ends September 30, in time to be considered for future budget deliberations.

"Our challenge over the coming decades is to balance the demands of current requirements with investment in the development of future capabilities," Chief of Naval Operations Admiral Jonathan Greenert wrote in an introduction. "This roadmap will ensure our investments are informed, focused, and deliberate as the Navy approaches a new maritime frontier."

The Navy has long operated submarines in the region, and flies surveillance and unmanned aircraft as needed, but by 2020 it plans to boost the number of personnel trained for Arctic operations. By 2030, as the Arctic Ocean becomes increasingly ice-free, the Navy said it would have the training and personnel to respond to crises and national security emergencies.

The Navy's updated road map noted that the Arctic has significant oil, gas and mineral resources, including some rare earth minerals now supplied mainly by China, and estimated hydrocarbon resources of over $1 trillion. Those resources are attractive to big multinational corporations and other countries, but they face big financial, technical and environmental risks due to the harshness of the environment, and the unpredictable weather, White said.

"If we do start to see a rush, and people try to get up there too fast, we run the risk of catastrophes," he said, urging a more gradual, measured move into the region by the private sector. "Search and rescue in the cold ice-covered water of the Arctic is not somewhere we want to go."