Fallout for children of Fukushima: 'Try to avoid touching the outside air' 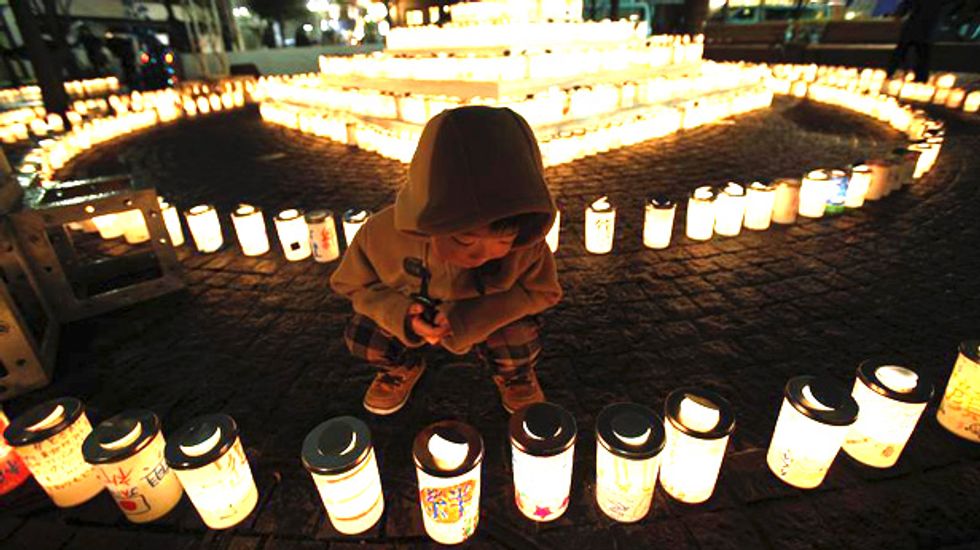 A boy looks at a candle light with a character reading: "bond", written on the candle holder at a memorial held in remembrance of victims of the March 11, 2011 earthquake and tsunami in Koriyama, Fukushima prefecture March 11, 2012. REUTERS/Yuriko Nakao

By Toru Hanai and Elaine Lies

KORIYAMA, Japan (Reuters) - Some of the smallest children in Koriyama, a short drive from the crippled Fukushima nuclear plant, barely know what it's like to play outside -- fear of radiation has kept them in doors for much of their short lives.

Though the strict safety limits for outdoor activity set after multiple meltdowns at the Fukushima Dai-ichi nuclear plant in 2011 have now been eased, parental worries and ingrained habit mean many children still stay inside.

And the impact is now starting to show, with children experiencing falling strength, lack of coordination, some cannot even ride a bicycle, and emotional issues like shorter tempers, officials and educators say.

"There are children who are very fearful. They ask before they eat anything, 'does this have radiation in it?' and we have to tell them it's okay to eat," said Mitsuhiro Hiraguri, director of the Emporium Kindergarten in Koriyama, some 55 km (35 miles) west of the Fukushima nuclear plant.

Following the 2011 quake and tsunami, a series of explosions and meltdowns caused the world's worst nuclear accident for 25 years, spewing radiation over a swathe of Fukushima, an agricultural area long known for its rice, beef and peaches.

A 30 km radius around the plant was declared a no-go zone, forcing some 160,000 people from homes where some had lived for generations. Other areas, where the radiation was not so critically high, took steps such as replacing the earth in parks and school playgrounds, decontaminating public spaces like sidewalks, and limiting children's outdoor play time.

"AVOID TOUCHING THE OUTSIDE AIR"

In Koriyama, the city recommended shortly after the disaster that children up to two years old not spend more than 15 minutes outside each day. Those aged 3 to 5 should limit their outdoor time to 30 minutes or less.

These limits were lifted last October, but many kindergartens and nursery schools continue to adhere to the limits, in line with the wishes of worried parents.

One mother at an indoor Koriyama playground was overheard telling her child: "Try to avoid touching the outside air".

Even three-year-olds know the word "radiation".

Though thyroid cancer in children was linked to the 1986 Chernobyl nuclear accident, the United Nations said last May that cancer rates were not expected to rise after Fukushima.

Radiation levels around the Emporium Kindergarten in Koriyama were now down around 0.12-0.14 microsieverts per hour, from 3.1 to 3.7 right after the quake, said Hiraguri.

This works out to be lower than Japan's safety level of 1,000 microsieverts a year, but levels can vary widely and at random, keeping many parents nervous about any outdoor play.

"I try to keep from going out and from opening the window," said 34-year-old Ayumi Kaneta, who has three sons. "I buy food from areas away from Fukushima. This is our normal life now."

But this lack of outdoor play is having a detrimental affect on Koriyama's children, both physical and mentally.

"Compared to before the disaster, you can certainly see a fall in the results of physical strength and ability tests - things like grip strength, running and throwing balls," said Toshiaki Yabe, an official with the Koriyama city government.

An annual survey by the Fukushima prefecture Board of Education found that children in Fukushima weighed more than the national average in virtually every age group.

Hiraguri said that stress was showing up in an increase of scuffles, arguments and even sudden nosebleeds among the children, as well as more subtle effects.

"There's a lot more children who aren't all that alert in their response to things. They aren't motivated to do anything," he said.

Koriyama has removed decontaminated earth in public places, sometimes more than once, and work to replace all playground equipment in public parks should finish soon.

Yabe, at Koriyama city hall, said parental attitudes towards the risk of radiation may be slowly shifting.

"These days, instead of hearing from parents that they're worried about radiation, we're hearing that they're more worried because their kids don't get outside," he said.

"I do sometimes wonder if it's really all right to keep children in Fukushima. But there are those who can't leave, and I feel strongly that I must do all I can for them."