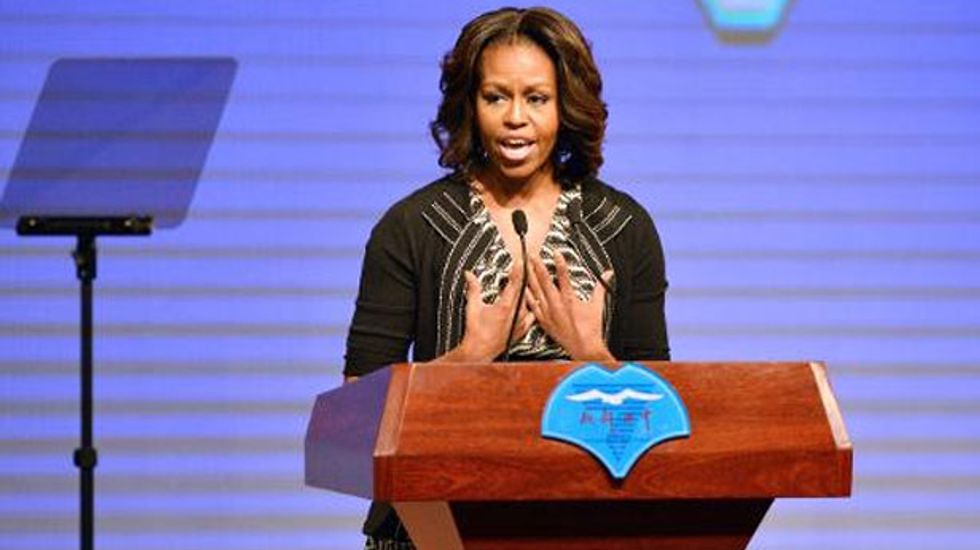 US First Lady Michelle Obama promoted ethnic equality, the civil rights movement and religious freedom in China on Tuesday, raising the sensitive issues on a tour meant to avoid politics.

"In America, we believe that no matter where you live or how much money your parents have -- or what race or religion or ethnicity you are -- if you work hard and believe in yourself, then you should have a chance to succeed," she told hundreds of students at a high school in Chengdu, the capital of the southwestern Sichuan province.

"We also believe that everyone is equal, and that we all have the right to say what we think and worship as we choose," she said.

"Now of course, living up to these ideals isn't always easy," she added.

Sichuan and other provinces neighbouring Tibet are home to a minority of Tibetans, an ethnic group that rights activists say faces religious and cultural repression, underscored by more than 120 self-immolation protests by Tibetans in recent years.

China rejects such criticism and blames the acts on separatist forces led by the Tibetan spiritual leader-in-exile and Nobel peace laureate, the Dalai Lama.

Obama, who is travelling with her mother and daughters, is scheduled on Wednesday to eat at a Tibetan restaurant in Chengdu, according to a White House itinerary.

The first lady cited herself and President Obama as beneficiaries of the civil rights movement -- a sensitive issue in China, which quashes popular protest.

"Over time, ordinary citizens decided that those laws were unfair," she said of the 1960s movement to denounce racial segregation in the United States and demand equal rights for African Americans.

"So they held peaceful protests and marches. They called on government officials to change those laws, and they voted to elect new officials who shared their views.

"And slowly but surely, America changed," she said. "We got rid of those unjust laws. And today, just 50 years later, my husband and I are president and first lady of the United States."

Since arriving in Beijing on Thursday night for a weeklong trip, the first lady has met with her counterpart Peng Liyuan, visited popular tourist sites such as the Great Wall, and spoken to Chinese students and educators.

US officials have cast the trip as focused on "soft" issues such as education.