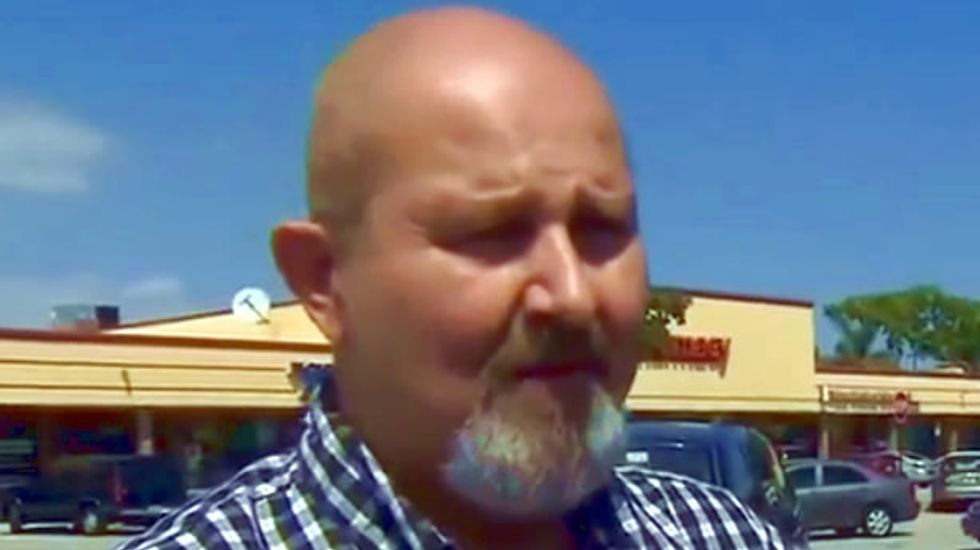 A social studies teacher at a Florida high school is claiming that his "right to free speech" was violated when school administrators barred him from a recent appearance of President Barack Obama.

Coral Reef Senior High teacher Randall Scott had said that he "would rather dine in Hell with Satan" than shake the president's hand, and described himself as a "virulent anti-Communist and hater of Obamanism."

Scott told his side of the story in a letter he posted on Instagram. "I'm a conservative Republican who uses social media to express my views," he wrote. "At the last two faculty meetings our principal had strongly advised us not to post anything. As a citizen of this great country I chose to ignore her advise [sic] which now in retrospect seems more like a veiled threat."

"The next day," he continued, "I'm suddenly excluded from a presidential event."

Miami-Dade County Public Schools spokesman John Schuster said in a statement that "the size and setup of the event venue did not permit all of the school's staff and students to attend, and local administrators were required to decide who would attend to represent the school."

The Miami New Times corroborated Scott's claim, writing that Coral Reef Senior High Principal Adrianne Leal had specifically warned faculty not to post about Obama on social media in the days before the event, and that Scott was excluded from the presidential appearance because he steadfastly refused to do so, littering his Twitter account with statements such as:

Think about it. Is the pen mightier than the sword or is obama just a Putz? @ In my I hate Obama mood http://t.co/ycpim8XaHg

His "I hate Obama mood" extends to First Lady Michelle Obama, who he blames for taking away his Pop Tarts:

She had my pop tarts taken out of the vending machine. She is evil married to a communist in an… http://t.co/tkO5NsuCu6

A weed smoking Kenyan is your president. And he is in charge of your health care. Seems normal. If… http://t.co/lPAA3XM91u

And then there is his favorite statement to make about the president, which he tweeted every evening in the days leading up to the assembly:

WOTUS @ OBAMA IS A PUSSY http://t.co/Ty6QQTlORh

We are so screwed @ OBAMA IS A PUSSY http://t.co/qaRZ3Lrksr

He claimed on Instagram that he finds "it hard to believe the Secret Service could find me a threat," and wrote to Marco Rubio's office asking them to look into his exclusion. "Can you look into this for me? I feel that I was singled out for using my right to free speech."

Scott also told WPLG that he wanted "whoever is responsible for this to publicly apologize for discriminating against me because of my political views."

Watch a WPLG interview with Scott below.