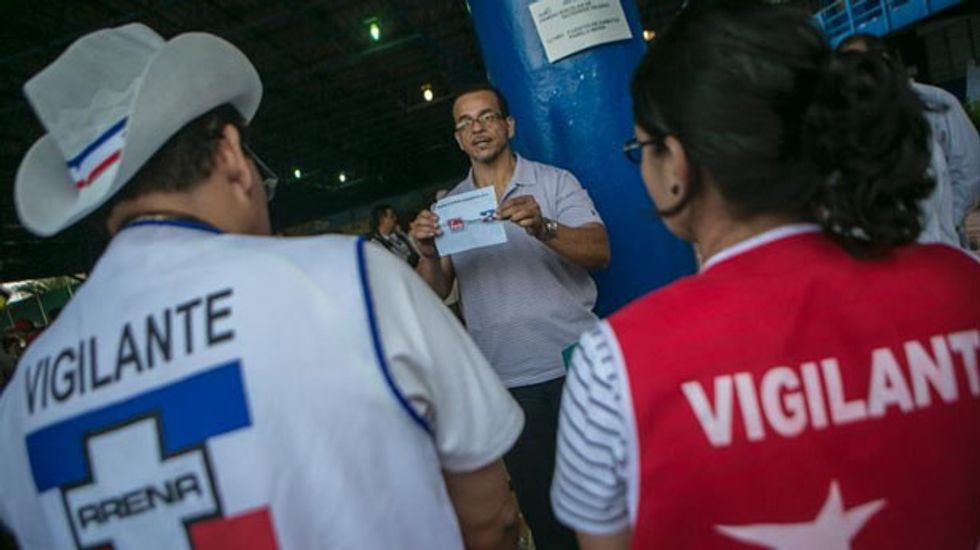 Voters in El Salvador cast ballots Sunday in a presidential runoff expected to crown the current vice president, an ex-guerrilla commander, as the country's new leader.

"I am absolutely certain that today the people will confirm the decision they made in the first round," Funes told reporters after casting his own vote.

With 84.49 percent of returns tallied, Sanchez Ceren was leading a tight race however: 50.13 percent to 49.87, electoral authorities reported.

A former teacher and ex-education minister, Sanchez Ceren was one of five top guerrilla commanders during El Salvador's bitter 1979-92 civil war, which pitted the FMLN against the US-backed conservative government.

The FMLN fell just shy of an outright victory in a first round vote last month, but polls now give Sanchez Ceren an advantage of between 10 and 18 points.

Quijano, meanwhile, is a law and order candidate who campaigns against the country's high crime rate and the notorious "mara" street gangs behind much of El Salvador's drug dealing and extortion.

Conservatives were in power for two decades until 2009, when Salvadorans elected their first leftist government, making Funes, a former journalist from the FMLN, their president.

After the first-round vote, Quijano overhauled his image somewhat, toning down his language against street gangs.

He now talks about keeping children out of the gangs and rehabilitating those already ensnared by them.

But Quijano suffers from links to his campaign adviser former president Francisco Flores, who is being probed over the whereabouts of $10 million donated by Taiwan during his 1999-2004 government.

Quijano's conservative party ARENA removed Flores from his advisory job two weeks ago, but the controversy has damaged his campaign.

After the civil war, El Salvador found itself facing violence from the street gangs, which control whole neighborhoods and run drug distribution and extortion rackets.

Homicides were running at 14 per day until a truce was reached between the two main gangs in March 2012, which helped to halve the murder rate. But extortion and other crimes persist.

Sanchez Ceren wants to rehabilitate former gang members, but said he would fight those who refuse to give up street life.

Whoever wins and takes office on June 1 will face a shaky economy.

That money totals around $4 billion a year and accounts for 16 percent of the country's GDP.

Sanchez Ceren vows to spend more money on social programs which he said he would finance via a "progressive fiscal policy."

"The main thing is to use those funds honestly," he has said.