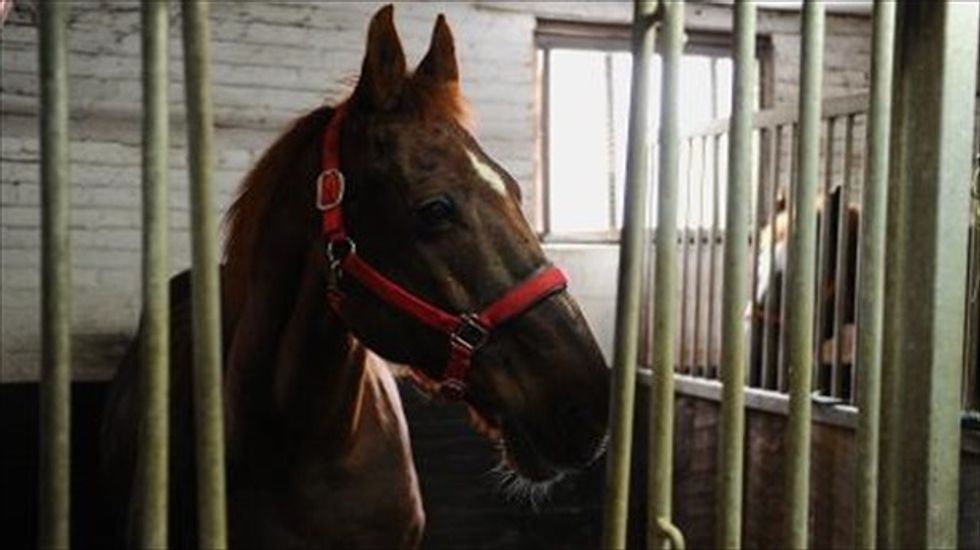 A horse in its stall in New York [AFP]

Horses from the United States, Canada and other countries in the region whose meat is sold in France for human consumption pose a health risk and are often cruelly treated, a leading animal rights group said Thursday.

L214, which derives its name from an article in a 1976 French law that stipulates that animals have to be kept properly and in healthy conditions, said the conclusions followed a wide-reaching, two-year investigation launched in 2012.

Horses from the US, Canada, Mexico, Uruguay and Argentina destined for human consumption were found to be emaciated, sick, injured or had been administered strong doses of anti-inflammatory medicines, according to the findings.

Using secret cameras, the probes were conducted at horse auctions, in export enclosures, at veterinary checkpoints, feedlots and abattoirs.

In a video posted on L214's website, horses are seen with open gashes, dislocated or broken legs, and left without treatment in feedlots.

Some are visibly dead and in a state of decomposition, in enclosures or in transport trucks, with other horses squeezed around them.

"Apart from the unacceptable treatment of the horses, the use of phenylbutazone or other dangerous substances banned in the European Union is common," said L214's Brigitte Gothiere.

The drug, commonly referred to as bute, is used to alleviate pain in horses that are not destined for human consumption.

It was originally also given to humans to treat rheumatoid arthritis and gout but was found to cause irreversible liver damage when combined even in small doses with other human painkillers.

The drug is no longer approved for human use in the European Union and United States.

The revelations follow a Europe-wide health scare last year when horsemeat was found in millions of ready meals labelled as containing only beef.

The group called Thursday upon leading supermarket chains to shun horsemeat coming from the Americas to put an end to the "cruel and illegal treatment" of the animals.

It carried out the study in conjunction with other animal lobby groups including Switzerland's Tierschutzbund-Zurich, Animals Angels' USA, Belgium's GAIA and Eyes on Animals in the Netherlands.

According to the groups, 82,000 horses were slaughtered in Canada in 2012 for human consumption. About 70 percent of them were imported from the United States, where horse abattoirs were closed down in 2007.

France, meanwhile, imported 16,900 tonnes of horsemeat in 2012, mainly from Canada, Belgium, Argentina, Mexico and Uruguay -- many of the countries featured in the investigation.