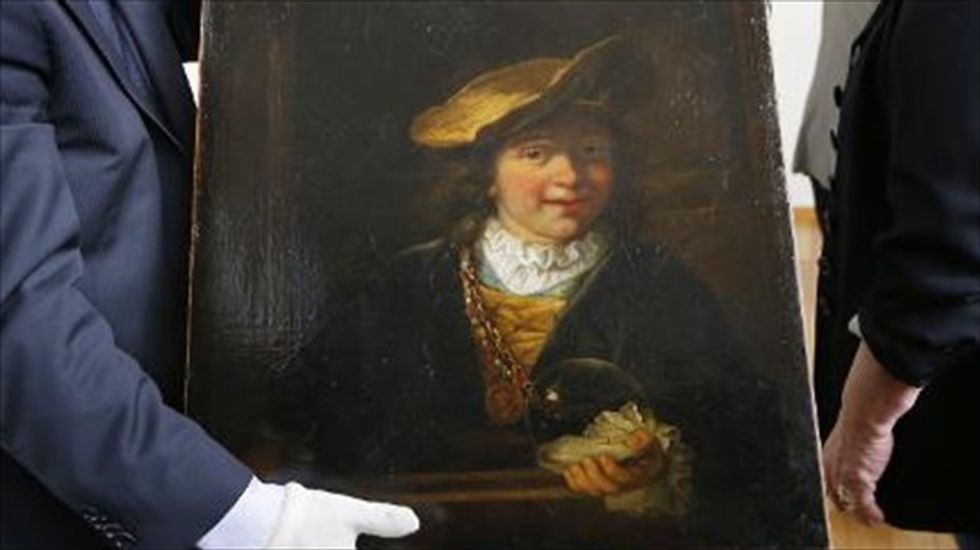 A member of the Central Office for the Fight against Trafficking of Cultural Property presents Rembrandt's painting 'Child with a Soap Bubble' on March 20, 2014 [AFP]

A French man has claimed responsibility for the theft of a Rembrandt painting worth millions that was stolen from a French museum in 1999 and recovered this week, a source close to the investigation said on Friday.

The 43-year-old from Lot-et-Garonne in southwest France told police he had stolen the Dutch master's "Child with a Soap Bubble" from a municipal museum as "a challenge" and had never earned any money from it.

He handed himself in on Wednesday night on the advice of his lawyer, a day after the painting was recovered.

Two men, including a former insurance salesman, were arrested on Tuesday in Nice in possession of the painting, which was valued at 20 million francs.

The artwork was stolen from a museum in the nearby city of Draguignan in July 1999. It portrays a teenage boy with long dark brown locks, wearing a golden necklace and holding a soap bubble.

After admitting the theft, the man was allowed to leave while further investigations are carried out, the source told AFP.

"He wants to draw a line under the matter. He is ready to take responsibility for his actions," said his lawyer Franck Dupouy. "He now has a settled family life, he has children and a job, and therefore wishes to conclude this matter."

The man kept the painting at his home up until 15 days ago, Dupouy said, and had "wrapped it with great care".

His client "never earned a single centime" from the sale of the painting. "He was cheated," he said, without explaining further.

The 17th century painting was stolen on July 13, 1999, from the municipal museum in Draguignan.

The man told police that he stole the painting by breaking into the municipal library next door to the museum during a military parade.

An investigation has been launched by the Central Office for the Fight against Traffic in Cultural Goods (OCBC).

The OCBC says there are still 13 Rembrandt portraits being sought worldwide.