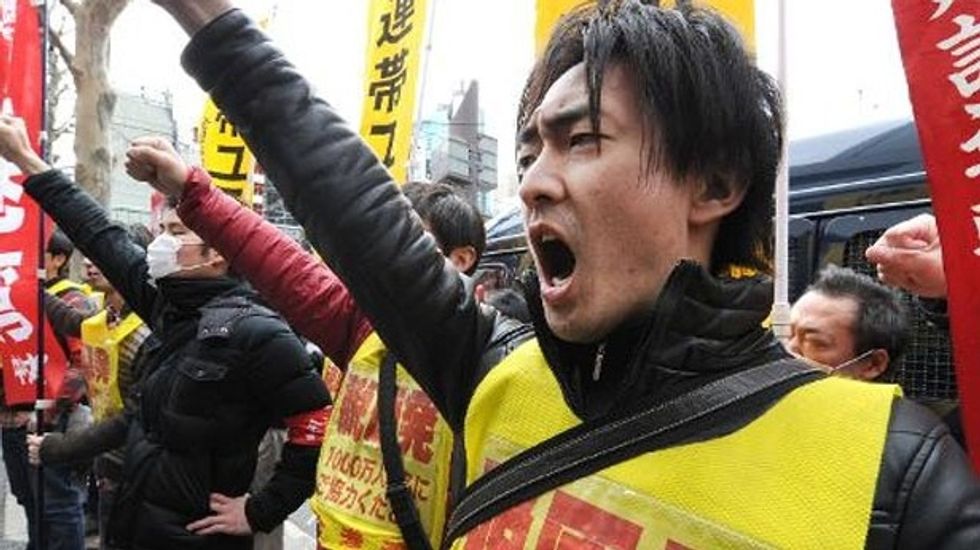 Fukushima nuclear plant workers rallied outside the headquarters of operator Tokyo Electric Power on Friday, complaining they were forced to work for meagre pay in dangerous conditions.

The group of about 100 demonstrators shouted and pumped their fists in the air as they railed against being cheated by contractors hired to find recruits to clean up the shattered site and surrounding area.

"Workers at the Fukushima plant have been forced to do unreasonable tasks with no decent safety measures," said one man in his thirties, who declined to give his name.

He said he was laid off after several months in the job due to heavy radiation exposure.

"Workers are forced to handle contaminated water in such grim working conditions, where any human being should not be put to work," he said.

"They tend to make easy mistakes under the pressure, but it's not they who are at fault -- it's the conditions that force them to do terrible tasks."

Three years since a towering wall of water plunged the Fukushima nuclear plant into darkness on March 11, 2011 and sent reactors into meltdown, plant workers have yet to even start dismantling the crippled reactors.

The decommissioning process is expected to stretch over decades.

Several thousand employees at the plant are locked in a daily -- and dangerous -- scramble to keep the site as safe as possible, making myriad repairs and building tanks for the vast amounts of water contaminated after being used to cool reactors.

The country's 50 atomic reactors have been shuttered in the wake of the worst nuclear accident in a generation.

On Thursday, Japan moved closer to restarting a pair of reactors in the southern part of the country, with the nuclear regulator saying it would conduct safety checks.

But winning the backing of local officials and an atomic-weary population will be a major hurdle to re-starting the plants.

On Friday, demonstrators also rallied outside the office of Maeda Corp., one of the contractors hired to run clean-up operations at the plant and in surrounding areas.

Questions have swirled about the working conditions created by the web of Fukushima contractors and sub-contractors.

Some demonstrators said they received far less pay than promised as various layers of bosses docked money for supplying meals, transportation and other expenses.

They also said many had not received a 10,000 yen ($98) daily premium for decontamination work.

"Most people are working for small pay without getting the special compensation," said a 51-year-old man, who said he was doing clean-up work near the plant.

Maeda Corp. did not immediately respond to a request for comment about working conditions in the stricken area.