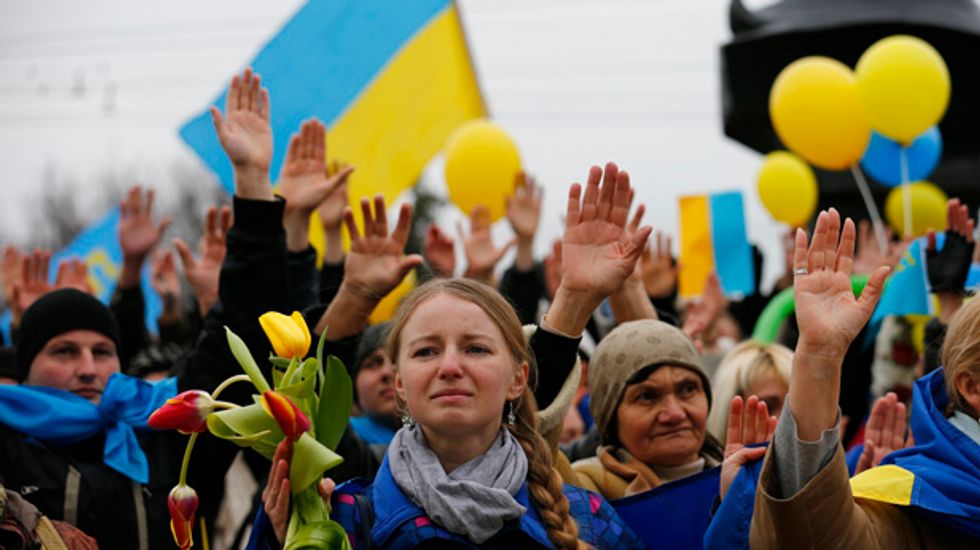 Pro-Ukrainian supporters raise their hands to symbolise a referendum and remember the victims of violence in recent protests in Kiev as they take part in a rally in Simferopol March 9, 2014. Russian forces tightened their grip on Crimea on Sunday despite a U.S. warning to Moscow that annexing the southern Ukrainian region would close the door to diplomacy in a tense East-West standoff. REUTERS/Thomas Peter (UKRAINE - Tags: POLITICS CIVIL UNREST)

SEVASTOPOL, Ukraine (Reuters) - Germany's Angela Merkel delivered a rebuke to President Vladimir Putin on Sunday, telling him that a planned Moscow-backed referendum on whether Crimea should join Russia was illegal and violated Ukraine's constitution.

Putin defended breakaway moves by pro-Russian leaders in Crimea, where Russian forces tightened their grip on the Ukrainian Black Sea peninsula by seizing another border post and a military airfield.

As thousands staged rival rallies in Crimea, street violence flared in Sevastopol, when pro-Russian activists and Cossacks attacked a group of Ukrainians.

Russian forces' seizure of the region has been bloodless but tensions are mounting following the decision by pro-Russian groups there to make Crimea part of Russia.

In the latest armed action, pro-Russian forces wearing military uniforms bearing no designated markings sealed off a military airport in Crimea near the village of Saki, a Ukrainian Defence Ministry spokesman on the peninsula said.

The operation to seize Crimea began within days of Ukraine's pro-Russian President Viktor Yanukovich's flight from the country last month. Yanukovich was toppled after three months of demonstrations against a decision to spurn a free trade deal with the European Union for closer ties with Russia.

Ukrainian Prime Minister Arseny Yatseniuk will hold talks with President Barack Obama in Washington on Wednesday on how to find a peaceful resolution to the crisis, the White House said.

One of Obama's top national security officials said the United States would not recognize the annexation of Crimea by Russia if residents vote to leave Ukraine in a referendum next week.

"We won't recognize it, nor will most of the world," deputy national security adviser Tony Blinken said.

Putin declared a week ago that Russia had the right to invade Ukraine to protect Russian citizens, and his parliament has voted to change the law to make it easier to annex territory inhabited by Russian speakers.

Speaking by telephone to Merkel and British Prime Minister David Cameron, Putin said steps taken by authorities in Crimea were "based on international law and aimed at guaranteeing the legitimate interests of the peninsula's population," the Kremlin said.

A German government statement, however, said the referendum was illegal: "Holding it violates the Ukrainian constitution and international law."

Merkel also regretted the lack of progress on forming an "international contact group" to seek a political solution to the Ukraine crisis and said this should be done urgently.

On Thursday, Merkel said if a contact group was not formed in the coming days and no progress was made in negotiations with Russia, the European Union could hit Russia with sanctions such as travel restrictions and asset freezes.

Merkel, whose country is heavily dependent on Russia oil and gas, has so far been more cautious than some other nations, urging Western partners to give Putin more time before punishing Moscow with tough economic sanctions.

This stance reflects German fears of the geopolitical consequences of an isolated Russia as much as it does concern about its business interests and energy ties.

In a round of telephone diplomacy on Sunday, the German chancellor also spoke with Turkish Prime Minister Tayyip Erdogan, agreeing that Ukraine's sovereignty must be preserved,

and Chinese President Xi Jinping, underlining the need to resolve the crisis through dialogue.

Russians took over a Ukrainian border post on the western edge of Crimea at around 6 a.m. (12.00 a.m. ET), trapping about 15 personnel inside, a border guard spokesman said.

At a Ukrainian military base at Yevpatoriya on the coast of western Crimea there were reports that the Russian forces had issued an ultimatum to surrender or be stormed. It passed, as has happened on other occasions at bases across Crimea.

"They are putting psychological pressure on us. It is not the first ultimatum," Lieutenant Colonel Alexander Lomaka told Reuters by telephone, saying the Russian forces would not allow him out of the base.

"We have no fight with them, but we are not going to hand over our weapons to soldiers of the Russian Federation."

Dimtry Bolbanchyov, 50, who works as a cook on commercial boats, bicycles 13 kilometers across town to bring the besieged Ukrainians soldiers food.

"I am doing what I can to boost their morale. Ukraine has become so weak, we can only hope for help from outside," he said.

In Sevastopol, several hundred people held a meeting demanding that Crimea become part of Russia, chanting: "Moscow is our capital."

Across town at a monument to Ukrainian poet Taras Shevchenko, violence flared at a meeting to commemorate the 200th anniversary of his birth, when pro-Russian activists and Cossacks attacked a small group of Ukrainians guarding the event and the police had to intervene.

Footage from the event showed a group of men violently kicking one of the Ukrainians as he lay on the ground and a Cossack repeatedly hit him with a long black leather whip.

Several hundred opponents of Russian-backed plans for Crimea to secede gathered, carrying blue and yellow balloons the color of the Ukrainian flag. The crowd sang the national anthem, twice, and an Orthodox Priest led prayers and a hymn.

Alexander Liganov, 25 and jobless, said: "We have always been Russian, not Ukrainian. We support Putin."

At a rally in the eastern city of Donetsk, home to many Russian speakers, presidential candidate Vitaly Klitschko, a former boxing champion, said Ukraine should not be allowed to split apart amid bloodshed.

"The main task is to preserve the stability and independence of our country," he said.

The worst face-off with Moscow since the Cold War has left the West scrambling for a response, especially since the region's pro-Russia leadership declared Crimea part of Russia last week and announced a March 16 referendum to confirm it.

U.S. Secretary of State John Kerry, speaking to Russia's foreign minister for the fourth day in a row, told Sergei Lavrov on Saturday that Russia should exercise restraint.

A spokeswoman for the Organization for Security and Cooperation in Europe said military monitors from the pan-Europe watchdog had on Saturday been prevented for the third time in as many days from entering Crimea.

Moscow denies that the Russian-speaking troops in Crimea are under its command, an assertion Washington dismisses as "Putin's fiction". Although they wear no insignia, the troops drive vehicles with Russian military plates.

A Reuters reporting team filmed a convoy of hundreds of Russian troops in about 50 trucks, accompanied by armored vehicles and ambulances, which pulled into a military base north of Simferopol in broad daylight on Saturday.

Ukrainian troops are performing training exercises in their bases but there are no plans to send them to Crimea, Interfax news agency quoted acting Defence Minister Ihor Tenyukh as saying. Ukraine's military, with 130,000 troops, would be no match for Russia's. So far Kiev has held back from any action that might provoke a response.