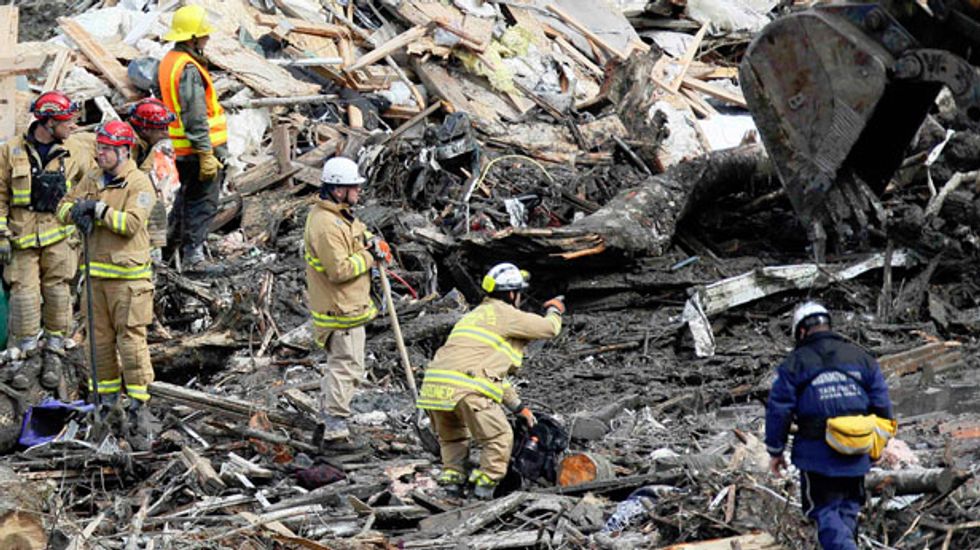 DARRINGTON, Washington (Reuters) - At least 25 people were confirmed dead almost a week after landslide sent mud crashing into dozens of rural Washington state homes, searchers said, as locals faced up to the prospect that some of the 90 still missing might never be found.

As the death toll ticked slowly higher late on Wednesday, a deeply traumatized community rallied round to comfort the bereaved and support rescue crews with everything from free food to prayer vigils.

Stores in nearby Arlington put up handed-painted signs calling for solidarity and donations, boy scouts collected food outside a market and a bowling league offered tournament prize money to relief efforts.

Construction worker Steve Findley cooked breakfast for dozens of residents inside an Arlington middle school that the American Red Cross had transformed into a temporary shelter.

"All the people I know are gone," he said.

"This is a very strong community... We all stick together," said 25-year-old Jamie Olsen as her husband and about 40 people in another nearby town Darrington sorted water, food, diapers and other supplies for families forced out of their homes.

A rain-soaked hillside collapsed near the tiny town of Oso, about 55 miles northeast of Seattle last Saturday, cascading over a river and a road into homes, blanketing about a square mile in muck and debris.

About 200 searchers combed through the disaster zone under cloudy skies on Wednesday. Rain was forecast on Thursday.

Late on Wednesday evening Brian McMahan, assistant fire chief of the community of Mukilteo, told a community meeting in Darrington that one additional body had been found that day, bringing the known total to 25.

President Barack Obama has signed an emergency declaration ordering U.S. government assistance to supplement state and local relief efforts. A local disaster relief account had nearly $50,000 in it on Thursday.

Authorities who whittled down a list of missing from about 176 people to 90 have said the victims could also include people from outside the community, such as construction workers or passing motorists.

Eight more people survived the slide but were injured, including a 22-week-old baby rescued with his mother and listed in critical condition although he was improving. The mother and three other survivors also remained hospitalized.

Asked whether he expected the death toll to rise significantly, Washington state Governor Jay Inslee told CNN: "Yes, I don't think anyone can reach any other conclusion."

Jan McClelland, a volunteer firefighter from Darrington who was among the first to arrive at the scene, conceded it was possible some bodies may end up forever entombed at the site.

"I'm fearful we won't find everyone," she said. "That's the reality of it."

The slide ranks among the worst in the United States. In 1969, 150 people were killed in landslides and floods in Virginia, according to the U.S. Geological Survey.

More than 100 houses were destroyed by a slow-moving landslide in the Washington state town of Kelso in the late 1990s.

In Arlington, storefront signs pointed the way to church vigils and plates of spaghetti.

"This is personal ... It's all about giving back what little I can," said Anita O'Sullivan, who had placed a sign in the window of her hair salon saying $5 from every cut would go to the relief effort. She had raised $240 by Wednesday.

To charge or not to charge: the Trump dilemma roiling America

A chilling portrait of a US president who knew he'd lost an election but tried to steal it anyway has emerged in testimony on the Capitol assault, posing a perilous question: should prosecutors indict Donald Trump?

In their comments to the congressional committee investigating the deadly violence, White House and Trump campaign staff, lawyers and even family members have drawn the contours of a possible prosecution, outlining potential presidential misconduct culminating in the riot at the Capitol on January 6, 2021.

According to a report from CNN, Republican voters in Colorado have become increasingly alarmed at the prospect that indicted 2020 presidential election denier and former county clerk Tina Peters could be their party's nominee for Secretary of State.

Peters, who was hit with 10 counts related to election equipment tampering by a grand jury -- and is affiliated with fellow election denier Mike Lindell -- is currently the GOP frontrunner for the job, and that has conservatives very worried.