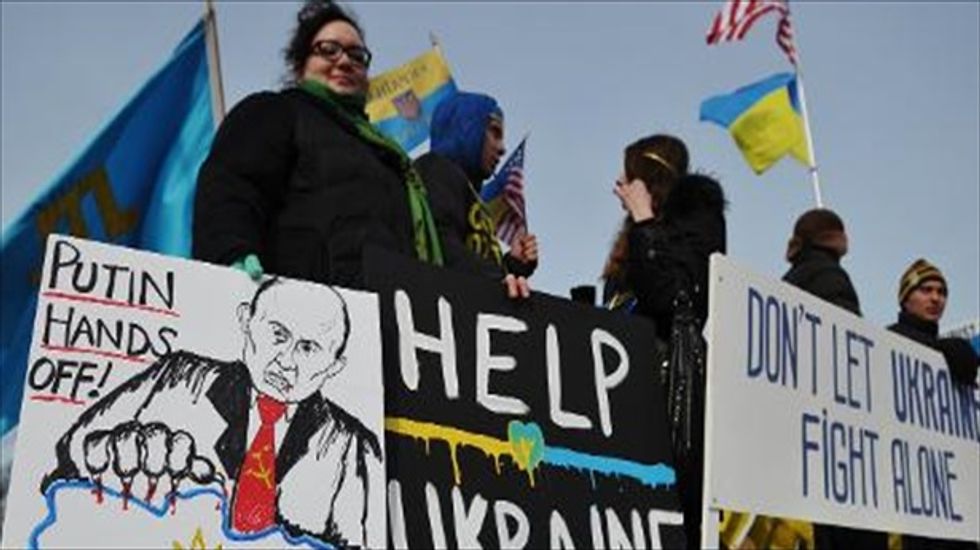 Demonstrators hold placards during a rally in front of the White House on March 6, 2014 in Washington, DC [AFP]

The House of Representatives on Thursday overwhelmingly approved U.S. financial aid to crisis-plagued Ukraine, but the Senate is unlikely to take up the measure until at least next week.

The lower chamber of Congress voted 385 to 23 in favor of the loan guarantees, the first tangible congressional response to Russia's incursion into its neighbor and former Soviet satellite.

The White House and State Department have said the aid will include some $1 billion in loan guarantees to Ukraine's government as Kiev grapples with military and political interference by Russian President Vladimir Putin.

Ukraine's new leaders have asked for at least $15 billion in financial aid.

"This is only a start on fulfilling our commitment to provide the president as many tools as needed to keep President Putin in check and protect the sovereignty of Russia's neighbors."

Boehner on Wednesday said the measure would strengthen Obama's hand in dealing with Europe's deepest security crisis since the Cold War.

The top congressional Republican also said a set of economic sanctions was being worked up by his committee leaders.

Senate Majority Leader Harry Reid, however, has signalled he would not be able to put the Ukraine aid bill on the schedule this week, citing a traffic jam of other legislation.

The non-binding measure is "part of a larger effort to provide assistance to Ukraine and to impose real costs on Russia for its actions," the committee's chairman Ed Royce said in a statement.