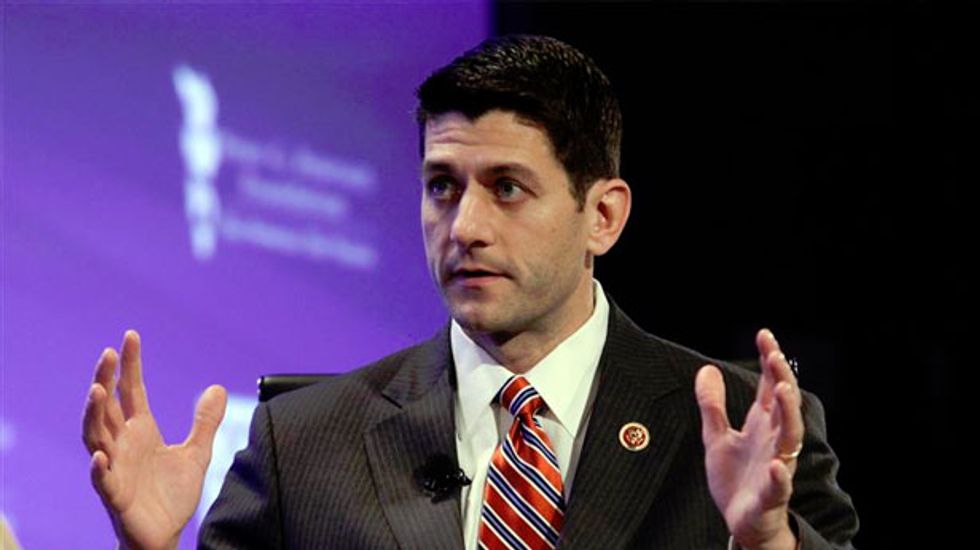 WASHINGTON (Reuters) - U.S. House of Representatives Republicans will unveil a 10-year budget blueprint in the next few weeks that will champion fiscal austerity, a theme party leaders hope will energize conservative voters ahead of the November congressional elections.

But crafting a budget that can bring together fractious Republicans could be a challenge for the document's lead author, House Budget Committee Chairman Paul Ryan. He will need to bridge divisions within the party over defense spending and wrestle with a separate dilemma over the funding of popular social welfare programs.

And making his budget balance in 10 years - a non-negotiable goal for many in the party - is made far more difficult by weaker economic growth forecasts from the Congressional Budget Office that have reduced projected revenue by $1.4 trillion over the next decade.

Russia's annexation of Crimea has revived a clamor among many Republicans to restore defense spending. But a bigger Pentagon budget would bust longstanding caps on spending and raise deficits unless matched by deeper spending cuts elsewhere.

"We need to send a message out of the White House and Congress that we're not going to be weak and keep cutting our military," said Iowa Representative Steve King, who favors boosting military spending. "That will be a pivotal moment in this budget."

The call for a leaner federal government has been a rallying cry for Republicans, who pushed in 2011 for President Barack Obama and his Democratic allies to accept strict curbs in so-called discretionary spending - the money that Congress appropriates each year to run government operations from weapons development to national parks.

These reductions were significantly deepened last year by another $1.2 trillion in across-the-board cuts known as the sequester after Congress failed to agree on other savings. Although eased somewhat through September 2015 by a budget deal struck late last year, the sequester caps are due to remain in place through 2021.

Democrats accepted the cuts to domestic programs partly because Republicans agreed that the military would share an equal amount of pain - a delicate balance that could be upset if Ryan's budget shifts more of the spending pie towards defense.

Representative Trent Franks, a conservative Republican from Arizona, who describes himself as a "quintessential defense hawk," said he would support a repeal of the automatic cuts in order to give more money to the military.

"I'm in the camp of restoring the military because it's the first purpose of the federal government, to defend the nation and national security. If we don't do that, the rest is meaningless," Franks said.

But some other Republican lawmakers believe lower spending in all parts of the government should take precedence.

Representative Justin Amash, a libertarian Republican from Michigan, said that the Pentagon, with 40 percent of the world's total defense spending, can still afford to contribute to balancing the U.S. budget.

The Ukraine crisis "hasn't changed my thinking and it hasn't changed the thinking of most of the more newly elected conservatives in Congress," Amash said. "People in our armed services repeatedly tell us at town halls that there is wasteful spending, even in the Department of Defense."

To achieve the goal of reining in long-term debt and deficits, Ryan's budget is likely to revive past proposals to cut programs that serve the low-income Americans, such as food stamps and the Medicaid health care program for the poor.

But one tough decision Ryan faces is what to do about the Medicare health program for senior citizens. His past budgets have adopted cuts to the program mandated under Obama's signature healthcare reforms, even though Republicans seek repeal of the law known as Obamacare.

Keeping the cuts would bring Republicans around $700 billion closer to balancing the budget over 10 years. But such a decision might also undercut a central campaign message for Republicans, who have attacked Obama's Democrats over Medicare.

Conservative groups have run ads criticizing cuts to Medicare Advantage, which allows seniors to obtain healthcare benefits through private insurance plans. The ads were cited as a factor that helped in Republican David Jolly prevail against Democrat Alex Sink in a Florida special election this month.

Ryan's budget also is widely expected to contain another version of his controversial reforms to Medicare, converting the popular fee-for-service program to a system of subsidies for seniors to buy private insurance.

Democrats believe such drastic changes, even if phased in slowly, would upset seniors and middle-aged voters and they will be ready with another round of attack ads for November. Democrats want to keep Medicare largely intact, arguing that Obamacare reforms will help hold down healthcare spending.

Republicans are seeking take over control of the Senate from Democrats and maintain their dominance in the House in the November midterm elections.

"I don't see how a Ryan budget helps them in November. You'd have to twist Republican arms to get it," said Chris Krueger, a policy analyst with Guggenheim Securities and a former House Republican staffer. "All it would do for fiscal 2015 would be to provide Democrats with campaign ads."

But Representative Jim Jordan, an Ohio Republican, said he thought the budget could be a unifying document.

"It's largely a visionary document. As long it can truly save Medicare and deal with our long-term cost problems, then I'm going to be supportive ... I think a lot of conservatives will do that," Jordan said.